Made this one for supper tonight... OMG! it's really good.

May try a small eggplant and serve as a side.

Thanks, camprn. That does sound/look really good. My Black Beauty eggplants, which gave me a few fruit earlier, have started bearing again. I have two that I think I'll have to pick soon - they're getting so heavy they're pulling the plant sideways. I've already tied it to the trellis and put a stake out front of the box to tie them to. I have weed cloth under the beds & didn't want to stake inside the bed.

Next time I'll plant eggplant on an outside box so I can stake them better. I have 2 plants - the other one has a medium sized eggplant and two baby ones & both plants keep blooming! Such fun. They are the bushiest, healthiest eggplants I've ever had.

Hopefully, I'll be able to cook some eggplant soon. My sons wanted eggplant parm, so I'll have to do that first, but I hope to get enough so I can try the baked stuffed recipe next! 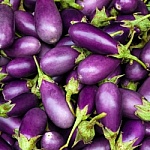 Thanks, camprn for this recipe!
Our vegetarian daughter will love this! The stuffing is prime for additions or substitutions for Vegetarians to boost protein. This also looks just plain great as it stands.