I just moved to Danvers about a week ago. I had been square foot gardening (pretty successfully I think!) for the first time this spring in central Virginia until a real job offer brought me up here. Until I can get settled enough to find a house (if I'm lucky) I'm going to be staying in a small apartment for awhile. While I have a little balcony that I'm going to try to grow some small salad-y things in I'd like to find some sort of community garden that I can rent a spot in for some of the bigger things I'd like to grow. Does anybody know of any (preferably off of 95 or Route 1 so I could go there after work) community gardens in the area?

Also, any tips on growing in the northeast would be greatly appreciated.

You'll find lots of regional "tips" as it were by going thru the month-to-month threads, but just remember that the zone differences among us can be pretty significant. What zone is Danvers in?

Welcome to the forum Tim! I hope you can find a house soon!

Molly- Thanks for the heads up about the zone differences. Once I looked at some maps I noticed what you had meant! It looks like I'm right on the line between 6A and 6B.

Tricia- I'm sure I can find a house, it's just finding one that a 25-year old who just started a "real" job can afford =P. Maybe in a year or so!

So, are you going to grow....Danvers carrots?

Welcome to the forum!  Hope you get to eat lots of salads!

Brainchasm- If I had a real garden with the proper depth I would sure try to grow Danvers carrots! On that note, this is what I have to work with at the moment. Any purists who are mad that I'm using the upside down tomato things is gonna have to get over it. As you can see, I'm a little tight on space. 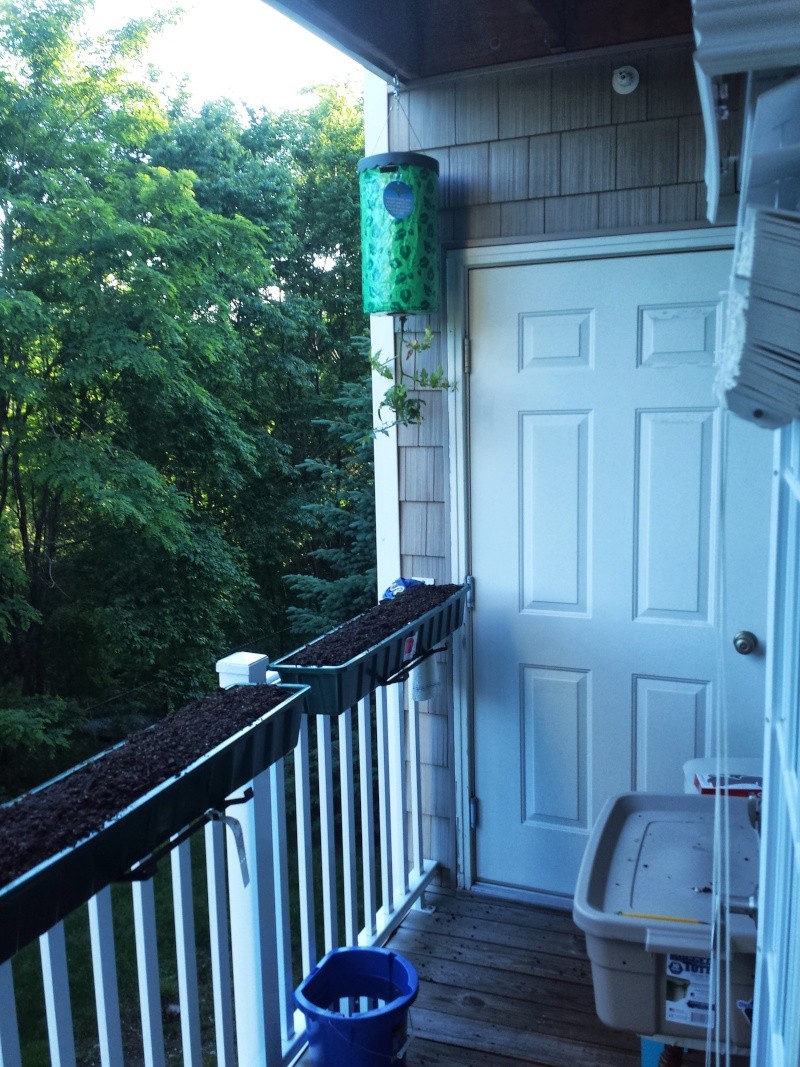 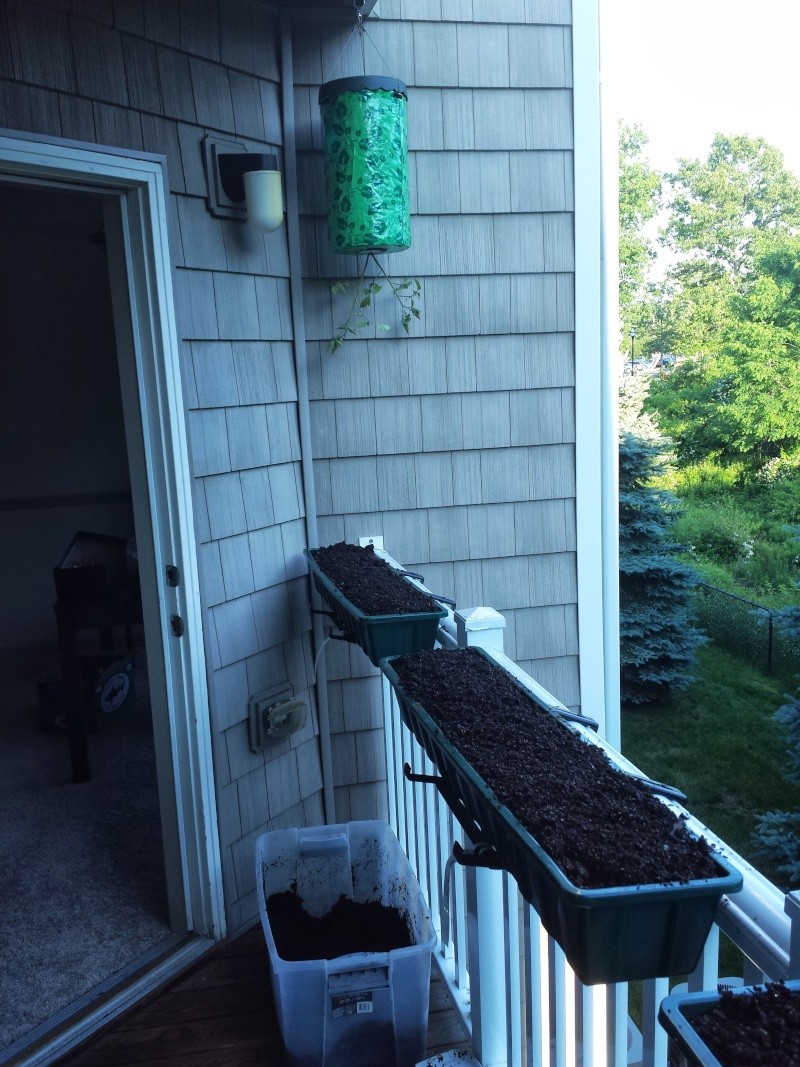 The two Juliets in the second picture are fun to look at. I went away for the weekend after taking those pics and they have both already "flipped" back upwards! I'm sure they'll grow down again once they start having more weight on them though.

I'm sure I'm far from the ideal planting times, but I just threw some spinach, swiss chard, bok choy, mini-carrots (think they are called little-finger) and some variety basil seeds in those three boxes. I'm interested to see what happens! Even if the spinach bolts right away I'll get over it since I'll be able to throw it in my vermicompost box (that little tub in the first picture). I'm gonna let some things build up and start rotting for a few weeks before I order the worms.

Anyone do anything similar to this before? Any comments or concerns are most welcome.

Tim, welcome to the area. In Massachusetts at least, everything is organized by towns. The counties are insignificant (they run the courthouses and maybe a prison). So to find a community garden you can join, you search by town. In Danvers, there are community gardens in Endicott Park, actually a remnant of victory gardens from WW II. Don't be surprised if they are full and there is a waiting list. Good luck. There are also lots of pick-your-own farms around. Should be picking strawberries now. Try Connors Farm in Danvers. 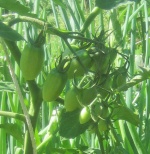 Meanwhile, if you want to have some really fresh produce you can either join a CSA or go to a local farmers market. Let me know if you want some info or suggestions as I do both.

Farmer Daves (based out of Dracut and having several pick up locations including Beverly) has a small share and a regular share. Not sure where you work or how close you are to Beverly, but it is an option. They also have a swap box which I love. First Light Farm, based out of Hamilton, but having several locations closer to you is also an option. They only have one size but it is a smaller size, in general, than Farmer Daves full sized.

It all depends on whether you cook every day, though, or would freeze items.

I'm on the very west end of Danvers on 114, right near the Peabody/Middleton line, so I was trying to stay right along route 1 and 95 (which is right near where I work as well). But Beverly might not be too bad of a drive once a week.

Another complication with this new gig is that I might have to travel often, sometimes unpredictably. Freezing/preserving extra material seems like it would be a must if I don't want to waste a ton, which is a skill that I should develop anyway!

Thanks again for your input, I'll check those spots out this afternoon.

Good news! I found a community garden that's very close to where I am!

Good/Bad news: I talked for a bit with the guy who organizes it. He's been able to convince the owner of the farm next door to plow under/disc harrow the entire lot every fall (end of October-ish) and add some of the composted cow manure during the process, so I guess the soil would be pretty decent. This leads me to a conflict of the true square foot gardening method. I'm still planning on running my vermicompost (and maybe now a regular compost) bin at home/at the community garden so that I can have a nice, rich, varied source of compost to plant with. However, we aren't allowed to leave anything (ie permanent raised beds) past the end of the season deadline.

So, I've been thinking of looking around for some type of raised bed set that snaps together that I could take apart at the end of the season and store (maybe at a local friend's house or, if absolutely necessary, at a rentable storage facility). What do you guys think? Would I still count as a square foot gardener if I had the defined beds and squared everything off but didn't totally fill them with Mel's mix? (but still made some compost to saturate the area right around the plants with rich compost and some vermiculite? A sort of Mel's mix light?)

I think I'm going to try the vertical stuff for sure: Maybe some mini-pumpkins and the like.

Anyone else have any tips/ideas for this new project?

You might not be orthodox ANSFG, but you can find plenty of good ideas to use.  The original SFG book talks about dividing up ones garden into 4x4 beds with or without frames and using its existing soil.  The benefits remain because you are better organizing your resources.

There are a few people here who are doing exactly this.  I believe mscaf has pictures of her community garden plot and of her neighbors who are imitating her SFG.
https://squarefoot.forumotion.com/t15948-community-gargen-update-with-pictures

I have a community garden plot and was unable to build the boxes or use mel mix. At the beginning of the season I took the dimension of my plot drew it up on graph paper. I than drew in the boxes that I wanted with aisles.  When I could finally get into the plot I used dowel rods and string to make my "squares". Than added good quality compost to each square and planted. My next step was mulching the pathways. While doing this, it took almost 8 hours, some other ladies who had plot asked me what I was doing, I explained its was pretty much SFG minus the mix and the box. They got excited and looked up SFG online. Two ladies actually build boxes for their plots. Since than the lady in charge of the gardens has seen the boxes and informed us that as long as we plan on using the plot next year we can leave the boxes/ string in place. So it wont hurt to ask if you can leave your boxes there over winter if you plan on utilizing the plot next year.

Side note: I can't have a compost pile or bin in military housing but I did find Bokashi at the Farmers Market. Its cold composting. Its doesn't smell and it makes compost tea too. My starter kits was $20, got me a 5 gallon bucket with a spigot on it, a bag of the bokashi and directions. Best part is you can add ALL you table scraps to in, including dairy and meat. You can also keep the bucket in your kitchen if you choose. My hubbys said now way on the one so its in my garage. My son got invited to take a private one on two (me included) tour the 2.2 acre gardens of the people who do this bokashi cold composting next weekend since he informed the gentleman selling us the bokashi that he wants to be a gardener when he grows up. He is only 6.

Yeah, unfortunately I can't leave the boxes there, as they don't want to have to deal with the farmer needing to dodge certain plots on his gigantic rig. I'll just do a hybrid thing like you suggested. And I'm glad to hear that your little one is so keenly interested in gardening! I wish my parents were into it when I was growing up.