October Avatar: Fall Gardening!! (click this)
Welcome to the Official SFG Forum
!!! Happy Gardening in 2021 !!!
Search
Latest topics
» What Have You Picked From Your Garden Today
by markqz Today at 7:57 pm

May is harvest month!

May is harvest month!

I always get my best harvests in May. I'm hoping that June will continue to be good this year, now that my drip irrigation will help me keep up with the watering, but in the past June has been a battle that I lose by July. Got my first okra blossom this morning, though, so hoping to keep things going as long as I can this summer.

What do you harvest in June?

I have been harvesting basil and rosemary for some time now but my other stuff will take a little longer. I guess since we have 3 weeks in May left I might also get a May harvest. a few of my tomatoes are starting to turn red, I have lots of jalapenos I could eat now but they will just get better and spicier with time, banana peppers are almost ready and green beans are continually producing.

My squash, zuc and cantaloupe will be while longer. Bell peppers are getting bigger but I doubt they will be ready in the next 3 weeks. I guess May will be more of a harvest month than I thought.

In June I harvest whatever is still alive

That's a fitting commentary on our hot weather down here! BTW, I'm having harvest envy! We didn't get our garden installed and planted until April 6th, and a few things were planted even later....SO, it will be a bit before we see some serious harvesting going on at our house. I do have some cherry toms that look like they might start turning red pretty soon...perhaps enough for one salad...which is plenty for the one person who eats fresh tomatoes.

My Swiss chard is also bouncing back nicely from the hailstorm, so maybe I'll have some of that to toss my tomatoes on. My cucumber plant looks like it might bloom pretty soon, and my golden crookneck squash and zucchini have loads of buds on them...plus a few baby squash on the crookneck that I'm praying will get pollinated properly so I can actually harvest them eventually! I have no idea how long that will take, though.

We've actually had three days when it rained since last Saturday, so
we're pretty happy. There's more rain forecast for next week, also,
so I will only need to water through this weekend and then I'll have
help from Mother Nature again (I've already requested no more hailstorms

). When I expand my vegetable garden I'll be
looking into an irrigation system of some sort...I'm especially sold on
that idea now that I know I'll be needing 30+ tomato plants in future years if I want to
can my own sauce, dry some, freeze some, can salsa, etc. My back yard is so small I
may have to plant some of them out front...or steal the section I had set aside for a playground for my boys.

My cucumber plant looks like it might bloom pretty soon, and my golden crookneck squash and zucchini have loads of buds on them...plus a few baby squash on the crookneck that I'm praying will get pollinated properly so I can actually harvest them eventually! I have no idea how long that will take, though.

You can help with the pollination.

Here is a video to demonstrate

Thanks for the video! Unfortunately, my first flower to bloom is a female, and there are no males opening up yet. How long do I have before my first female squash flower will die?

I am way behind everyone. I just decided to build a SFG in late April. Planted most of it on May 7th. I don't really expect much from the spring planting because of the late timing.

Corn popped out the ground yesterday. Cucumbers added a new set of leaves and are looking very good. Peppers have blossoms and some small peppers so I will at least get some small ones. Egg plants are growing fast. Going to plant some bush beans when the grandkids come over on Mothers Day

Yes I'm way behind but I am not worrying about it.


By the way, that is a great looking harvest!

I guess I spoke to early. I cut some greens off my green onions that I shoved in the ground last week. They went into some deer chili that I cooked tonight for a family reunion / picnic tomorrow.

First blossom opened on my cherry tomatoes this morning. I'm on my way to a good start.

Well, I've been pretty sick for a few days, and left my boys to do the watering (not a great arrangement) so I had no idea that the little 3" grey zucchini and the tiny 1" round zucchini were growing so darn fast... 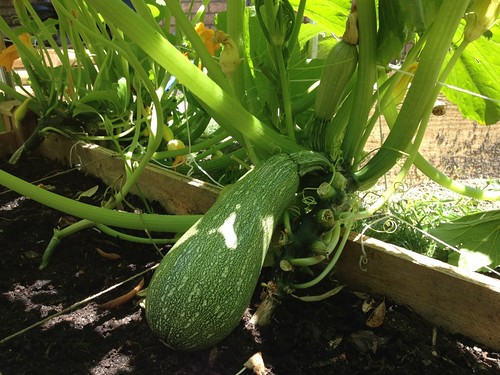 The above zucchini, I will swear, was only 3" long and less than an inch wide about 3 days ago, but now it's about 8"long and over 3" wide at the bulbous end. Let me simply say, WOW!!!

I had NO IDEA they could grow so quickly! I plan to harvest it after my boys get home from school, so they can enjoy the fruits of their labors in a harvest celebration. We'll make zucchini cookies, I think, or perhaps zucchini bread, since I'm sure it's beyond the tender stage by now. 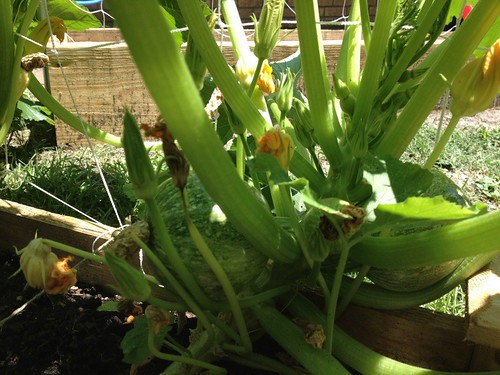 These round zucchini truly were but 1" hints of their current selves the last time I looked at the plant.

Now they're over 3" in circumference, which I believe means they are ready for harvest as well...and I need to find a recipe for stuffed zucchini very quickly! Since they grow a bit slower than their cousin next-door, I believe I'll leave them be for another day so I have time to find that recipe. If you have one to share, I'd appreciate your doing so!

Suddenly it's the true beginning of harvest time at my house!

This is WAY better than the few leaves off the lettuce and Swiss Chard I was able to enjoy last week. Speaking of those, SOMETHING is eating holes in my chard! If it weren't for said holes, I would be taking a few leaves for another small salad...but I'm afraid of what might be attacking the poor plant. It was sprayed a few days ago when I had tiny worms, or something worm-like, eating my Malabar spinach...not sure what they were, but I was afraid they would move on to something else and the chard is a close neighbor to the spinach so I took no chances and sprayed everything in the box. Anyway, the holes are similar to but not the same as the holes said worms were eating in the spinach, so I'm not sure if it's the same creature and I just didn't notice the holes until now, or what. Believe me, that's quite likely, given how I was feeling the day I sprayed. So, here's a photo of the phenomenon: 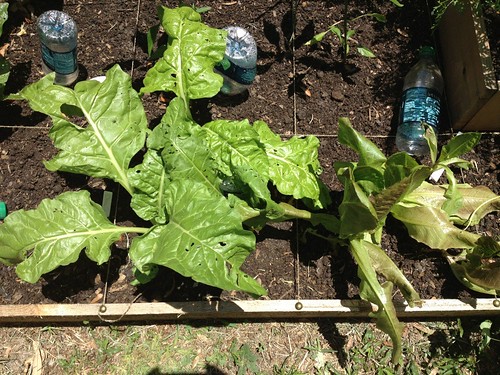 That's what I'm expecting to harvest...I will take a photo once I have done so, but of course I had to share now!