K - so I noticed this when I pulled my broccoli plants a few weeks back, and then again today when I was preparing those squares to replant, I unearthed (or un-Mix-ed?) clumps of what looks like grey dryer lint. I am thinking that something may have laid eggs or something.

The picture really doesn't quite show it very well, but you can see that it came out in clumps instead of the normal friable-ness of MM. 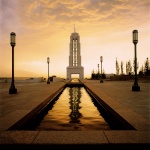 Here is a web page for broccoli pest & diseases.
http://www.no-dig-vegetablegarden.com/broccoli-pests-and-diseases.html

I can't tell from the picture what the problem might be.

If it's a root pest/disease it probably is either "cabbage root maggot" or else it's Club Root.

I suggest getting a look at the roots with a magnifying glass to help get a better description of what it looks like.

On the upside:
It might be caused my microbe activity in the soil (a good thing). So don't panic yet!!

Please post again when you can give us a better description of it.

Thanks Dave and Camprn. I'll have to wait till the morning to try to get another good picture. I will also have to pick my way through the ant hill I disturbed in my corner square. Grr. Not a good evening in the garden. I'm thinking I'll head out for some DE in the morning. I'll update.

So I went and got some video this morning, and made another discovery. Mushrooms growing underground! So take a look - hopefully you can see a little better what I'm talking about. And let me know what you think may be going on. I apologize in advance that it's so long, and thank you for taking time to help me out!!!!!

(Update: I just found some more and sifted through it with my fingers,
and it ends up looking like normal MM once it's been manipulated for a
while. (?) Maybe it's just my vermiculite doing something interesting?
When I brushed the bench off after sifting through, there was a lot of
leftover silver dust like I see when the verm. gets crushed. But the thing that's weird is that I've not seen it an any other squares. Just here in my old broccoli squares. I guess last year it was pumpkin and carrots as well.)

Did you use mushroom compost in your blend. Is it possible you have some latent mushrooms and that is causing your white clumpy fuzz?

Just wondering folks, don't really have a clue, but Plantoid was talking about getting mushroom compost and managing another crop out of it.

mushroom spores maybe since there was the mushrooms under there 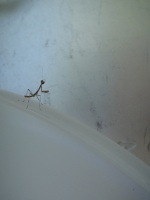 I DID use mushroom compost, so maybe that's all it is! That would be such a relief! So do I just watch carefully and pick any mushrooms that come up? Is there more that I can/should do?

And does anyone think I should be digging out that one square that had all the native soil mixed in from the ants?

Hey jazzy ...... Looks like you're on to something there with the mushroom find!!!

The video provided a better view of the situation. Looks like you can rule out the cabbage maggots - I didn't see anything "moving" around.

If it were club root, you'd see galls on the roots of the broccoli. It creates a deformity on the root itself.

Your original description about the "grey drier lint" mixed in with the MM and clumpy effect to the soil was a clue. Finding some mushrooms growing in your SFG is another clue (and a BONUS). Have you used any Mushroom compost as part of your Compost mix? My guess, as well as others (walshavek & newstart), is that it's probably how it got there.

I mentioned earlier it might be microbial action occurring in your soil.
I think the grey drier lint looking stuff is "fungal mycelium". Mushrooms are beneficial companions to plants in the garden. I think you are witnessing that affect. Pretty cool stuff!!!

For more info about Mushrooms and Mycelium check out the website "Fungi Perfecti" (founder is Paul Stamets) at http://www.fungi.com . Paul Stamets is world renown for his work with mushrooms.

Stamets has developed a new technology (called Mycotechnology) using mushroom cultivation that have shown promise with improving the Ecosystem. Here are several example articles of successful projects he as done with the technology from his website at: http://www.fungi.com/mycotech/index.html .

Pretty cool stuff. You may be interested to check out his website, he also provides products for those who might want to try a little mushroom farming.

So you DID use mushroom compost. That stuff is the best. Don't want to use too much of it though as a % of the Compost mix.

No, I'd leave it alone. Add some more of the wonderful compost and re-plant!!!

Whoah. That's actually quite mind-blowing, and very VERY reassuring. I'm so protective of my precious Mel's Mix, and it's always frustrating to see something that might be bad or potentially dangerous to my sweet planties.

I used it as 1/5th of my compost, so I am guessing that's not too much. I may just have a patch of not as well-mixed stuff there in that section. (?)