@Robbomb116 wrote:I misremembered the price.  Checking my reciept from today they were  $12.99 for a pack of two. Still don't feel it broke the bank.

Full spectrum bulbs are about 3x that price, but they are supposed to last a long time.

Yeah, these didn't say full spectrum. They were just recommended by an employee and were called "gro-lux"

My current conundrum is trying to decide if it's even worth trying to plant peas this year... I planted them almost a month ago last year, and it still got too hot for them very quickly. I want to put cucumbers in after the peas, and I'm kinda thinking it might be best to skip the peas and go right for the cucumbers in a few weeks.

@sanderson wrote:With the way Mother Nature has been this spring, it may be best to wait for the cucumbers.  On the other hand, . . .

Nothing lost if you try some peas even if they don't work.

I've had some success staring peas indoor in toilet paper tubes or other cardboard tubes. They usually don't like to be transplanted but if you bury the whole thing, tube and all, in the MM they work fine. I find it more difficult to start peas outdoors in the Spring. They seem to rot before germinating in the cold damp MM or get eaten by critters. This year I am experimenting with Winter Sowing peas by sowing them in cardboard tubes, with potting mix, and placing the tubes in a 4 liter ice cream tub which is then left outside.

I have them planted in the greenhouse where I plan to grow cucumbers. I figure I can kind of ease the cuke plants among the peas when it is time. Eventually as the cukes grow and the peas peter out the pea plants will be mulch for the cukes. I planted Sugar Daddy because they are fast and short vines and I hoped that meant it would be easier to squeeze the baby cukes among them. That is the plan at least.....
____________________________

Even though it's only been a few days I feel the seedlings are perking up. Every kale or broccoli has at least 1 true leaf now. And I lifted the tray up and holy cow do they have roots coming out the bottom! Looks like I'll be potting up soon after all!

@Robbomb116 wrote:Even though it's only been a few days I feel the seedlings are perking up. Every kale or broccoli  has at least 1 true leaf now.  And I lifted the tray up and holy cow do they have roots coming out the bottom! Looks like I'll be potting up soon after all!

If the roots were sitting in water maybe they were drowning which I think would cause the leaves to turn yellow.

@trolleydriver wrote:
If the roots were sitting in water maybe they were drowning which I think would cause the leaves to turn yellow.

That very well could be. Actually with the timeline of everything, that would make a lot of sense to me. Anyway, it seems time to pot up the brassicas this week. Hopefully I'll have time tomorrow, as I work 2 jobs on Mondays.

This week is looking good. I think I'll pot up the brassicas and possibly start hardening them off. I think they need bigger pots soon rather than waiting for them to be ready to go out with how many roots I saw coming out the bottom.

I did take the straw mulch off my strawberries yesterday. I misinterpreted the forecast slightly, I thought the low for yesterday was from early yesterday morning, but it was for last night I guess. So the strawberries got a bit chillier than I meant, it dropped to 18F. Hopefully that didn't mess them up too much. Regardless, I think the weather from here on out should be warm enough for them.

@Turan wrote:I am glad to hear the plants are perking up. Roots in water is pretty common with out bothering the plants, like in aero gardens. Our weather for this week is looking good, is it for you as well?  If I have time I need to get a bed ready to plant out the broccoli soon.

The water in an AeroGarden is spiked with added nutrients and my AeroGarden pumps the water over the roots. I'm pretty sure that over watering can result in yellow leaves as can underwatering.

@Turan wrote:I am glad to hear the plants are perking up. Roots in water is pretty common with out bothering the plants, like in aero gardens. Our weather for this week is looking good, is it for you as well?  If I have time I need to get a bed ready to plant out the broccoli soon.

The water in an AeroGarden is spiked with added nutrients and my AeroGarden pumps the water over the roots. I'm pretty sure that over watering can result in yellow leaves as can underwatering.

Definitely over-watering can cause yellowing leaves.  For a potted plant, the continual watering washes the nutrients out of the pot thereby not enough nutrients to keep it green if a water based fertilizer (at reduced strength) is not used every time it is watered.  There may be other causes of yellowed leaves but I can't think of any more right now.

Yes, but the cause of the yellow leaves is still lack of nutrients, not the roots growing out of their soil and into water. We all agree these seedlings looedk like they need fertilizing and sun, and are glad that feeding them and improving the lighting, seems to have worked.
____________________________

Just some pictures of the plant babies. 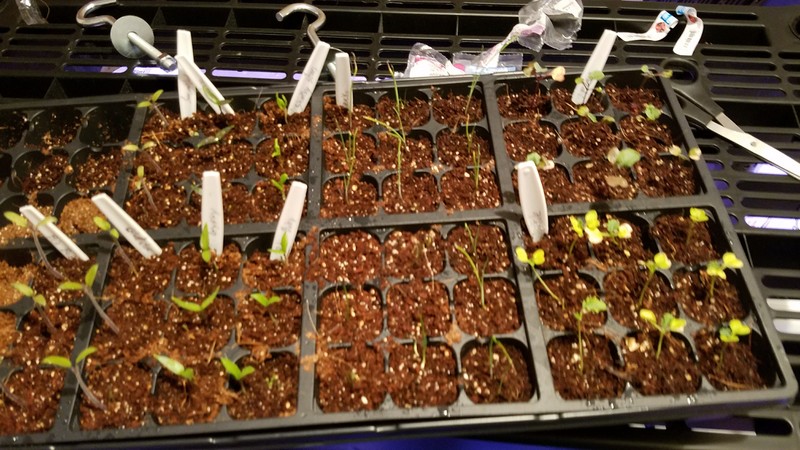 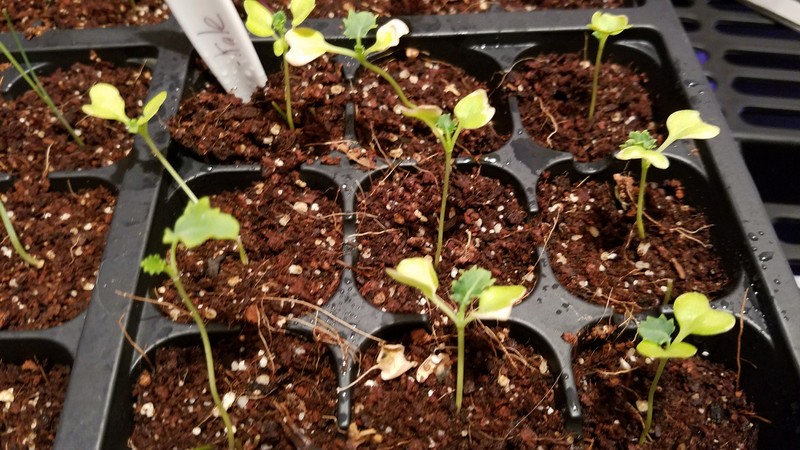 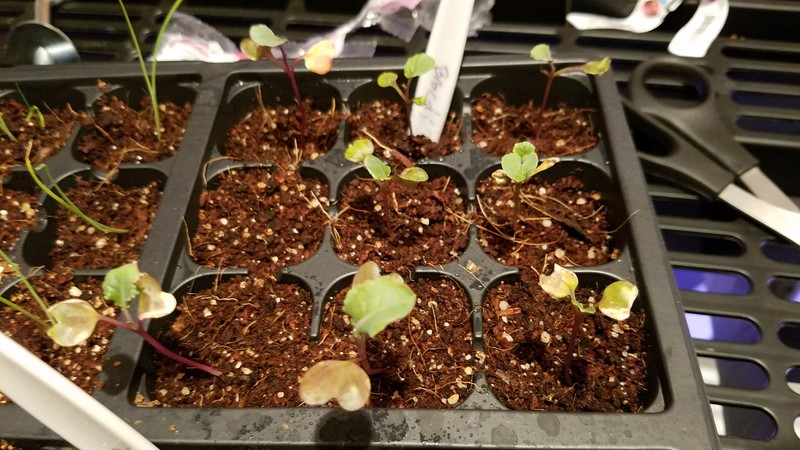 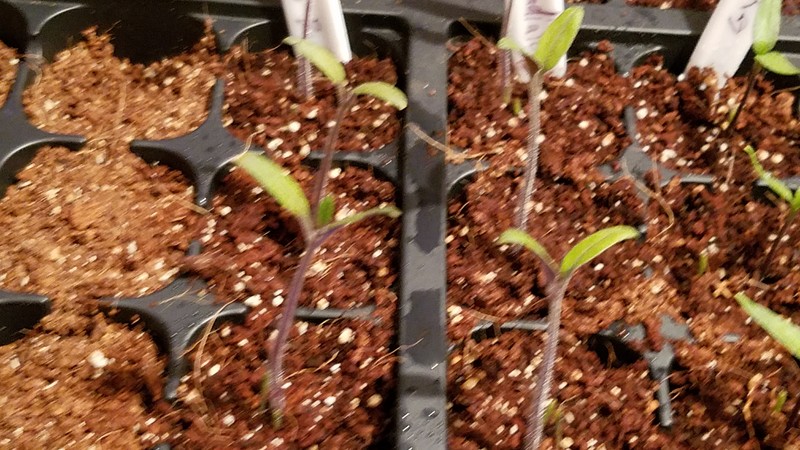 It's so exciting when the babies first sprout and grow!  What medium is that they are planted in, Rob?  It seems very brown on my monitor.

Just some organic Burpee seed starting mix. Which after reading the ingredients is mostly peat moss.

Correction, the seed starting mix says it's made of coconut coir, perlite, and an organic fertilizer. It also says on the back that after 2 weeks of growth, add some liquid fertilizer as per manufacturer's directions... strange how my seedlings looked stressed after 2.5 to 3 weeks when I didn't follow the instructions huh?

I did pot up the brassicas yesterday, for the mix for those I added some thawed homemade compost I had in a 5 gallon bucket in the garage to the seed starting mix. Probably about a 3rd by volume. I was going to use some MM but it was left outside all winter and was still frozen.

I added 2x4s on top of my garden beds, added a bag of Black Kow to each bed and mixed it in. Have a few inches from the top of the MM to the top of the beds left for mulch.

Kale and broccoli likes the garden much better than the sees starting mix. 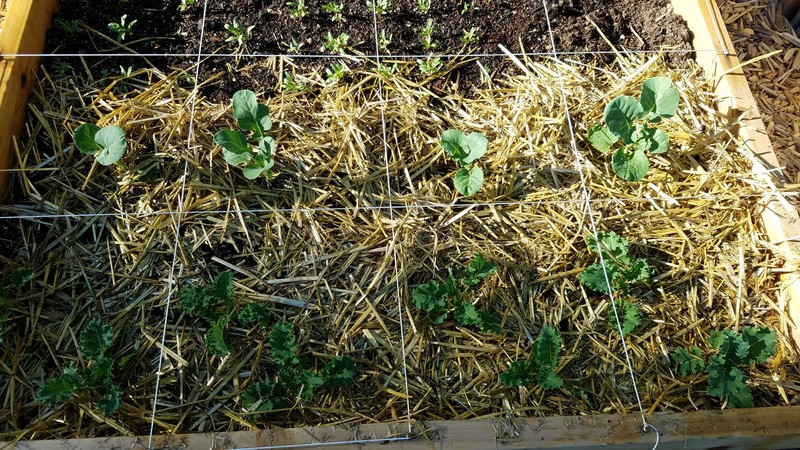 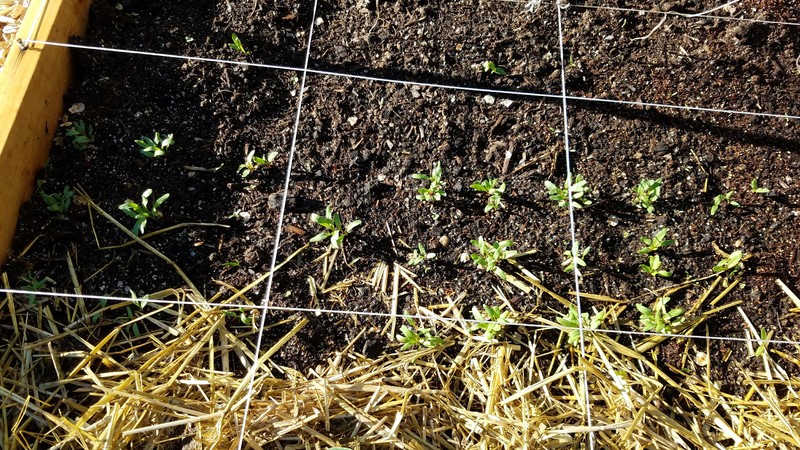 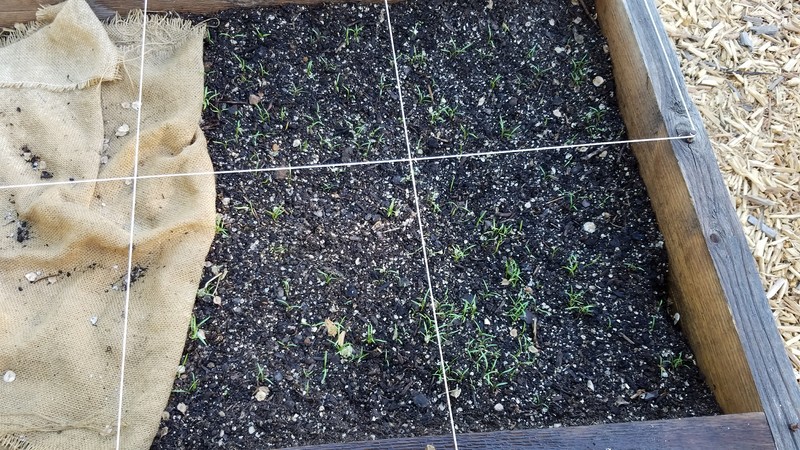 Lost a few strawberries over the winter, but the ones that made it are looking awesome! Already setting some flowers. 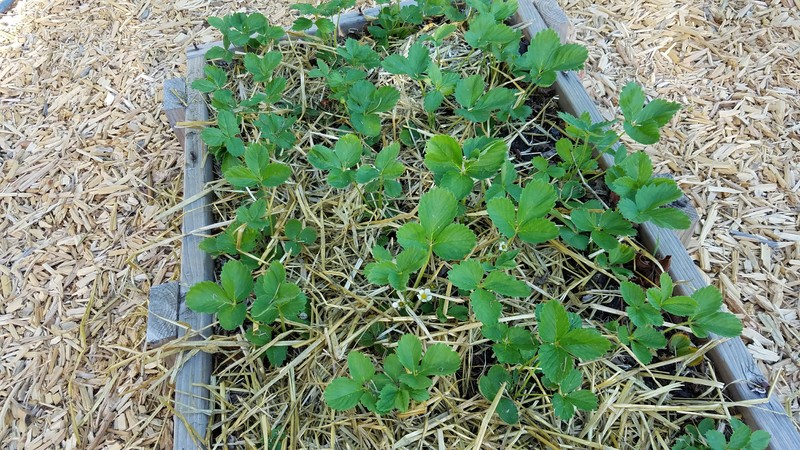 Pictures and updates. I haven't had time to post often between actually tending the garden, working 3 jobs, and parenting. I decided to plant the seedlings I grew indoors even though they were small and behind everyone else's. I figured I could live with it if they didn't produce quite as much as if I had bought transplants, I just wanted to see what the ones I grew from seed could do! 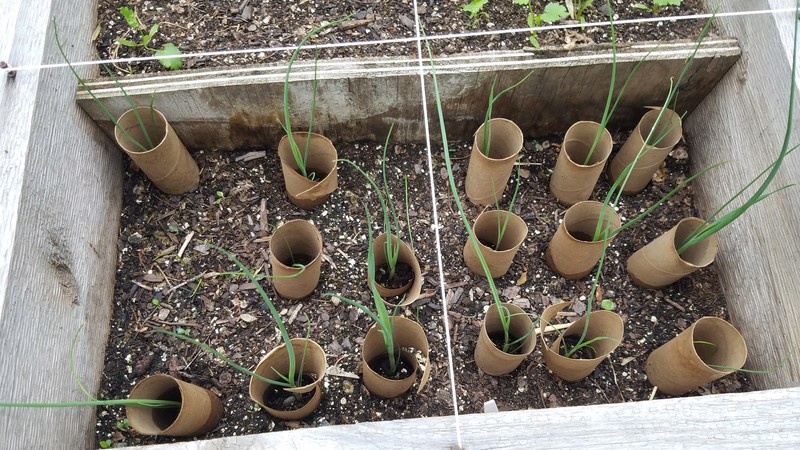 Carrots and parsnips. The parsnips has spotty germination, and it seemed like the ones that did germinate all were planted right next to each other. In order to not disturb the tap root, I did not try to move any. Thus many were lost to thinning. 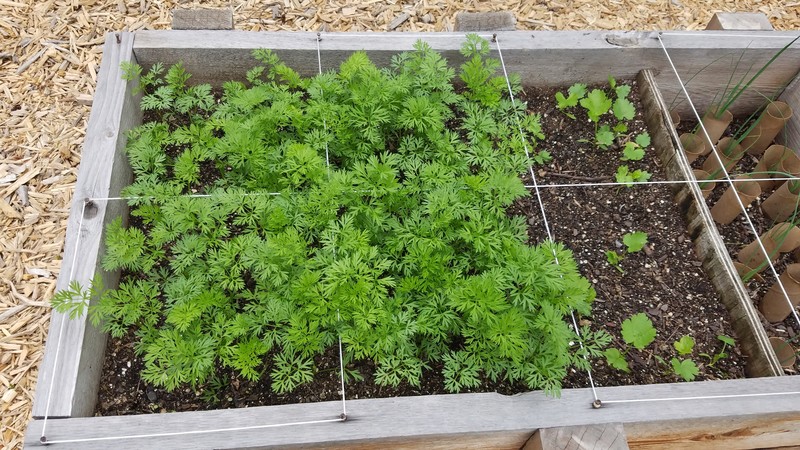 Zucchini. Tried to have 3 plants growing out of this 1.5x1.5 to be sort of like a hill. Only on plant germinated out of the 6 seeds I planted though. Luckily I had 4 pattypans germinate in the other 1.5x1.5, with one being far enough away that I dared try and move it. So this bed has 1 zuke and 1 pattypan. 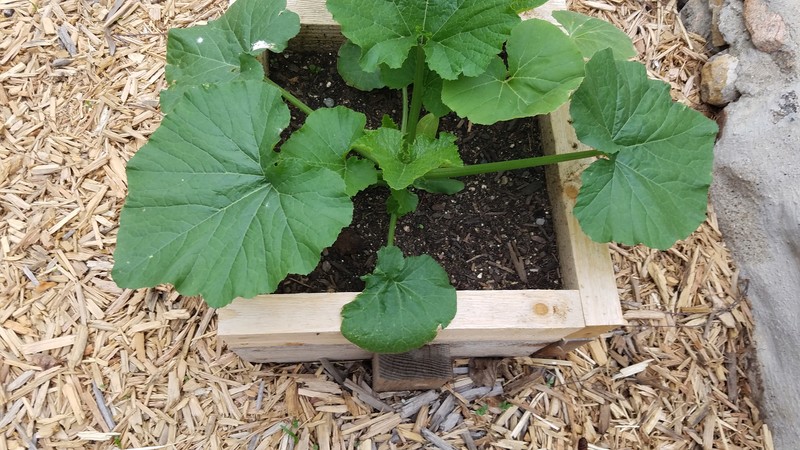 The pattypans. From last year I learned that they have a decently long main stem, so I think I'm going to put some stakes around the bed and try tying them up it. 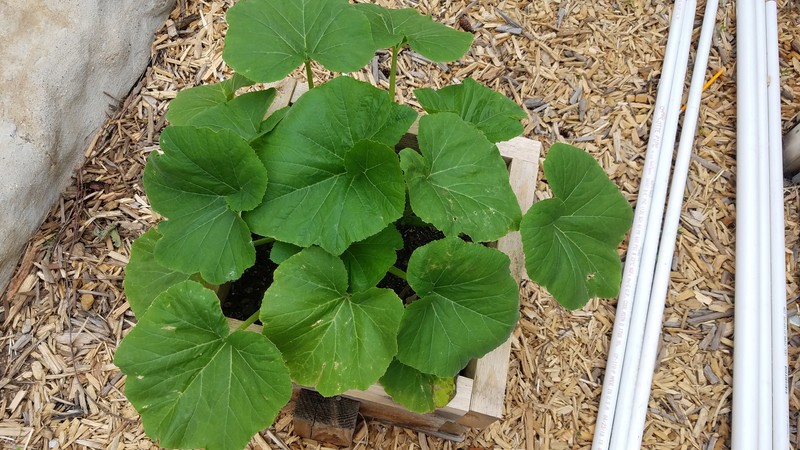 Armenian cukes. They have some brown spots on the leaves and don't seem to be doing the greatest... 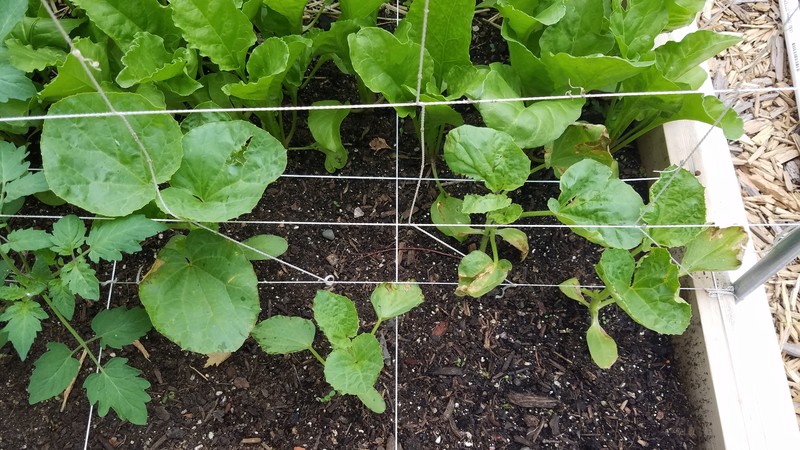 Broccoli and kale. I'm thinking maybe 1 per square is pushing it for broccoli, man they are huge! And I knew 2/sq was going to push it for the kale, but I'm already got quite a bit of kale from it, and will probably make some kale chips this weekend. 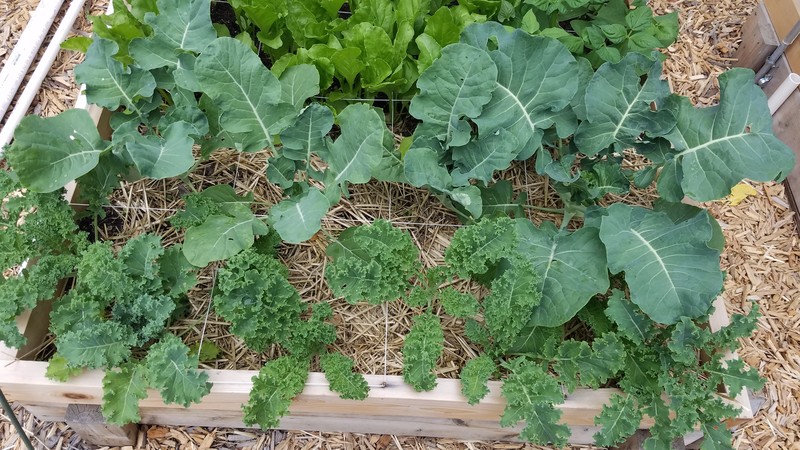 3 squares of Avalanche beets, with a Bush bean next to them. And sungold tomato plants in the back next to the cukes. 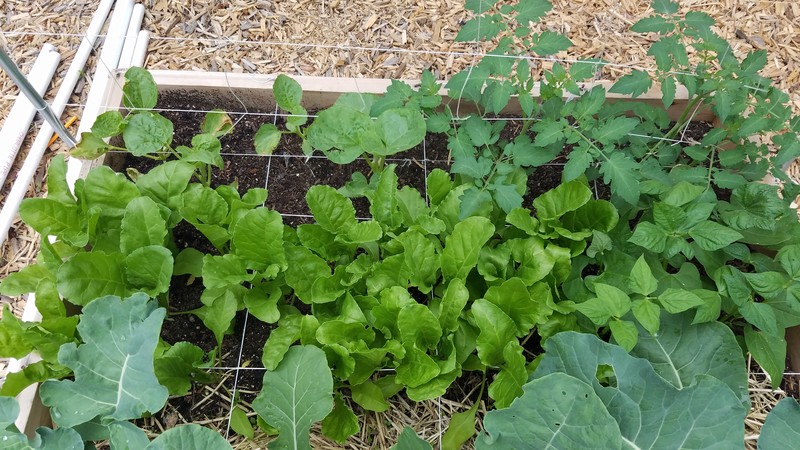 Overview of my other bed, with the eggplant, peppers, and tomatoes I grew inside. Also a row of Bush beans. 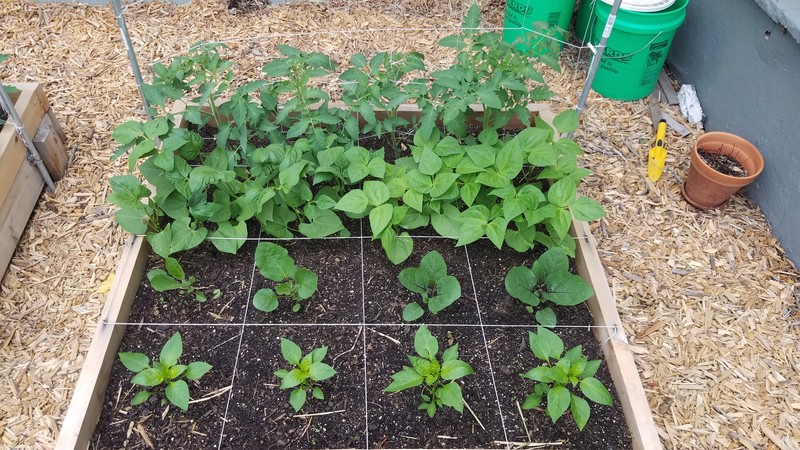 A close up of one of my patio baby eggplants. Tiny holes forming in the leaves but otherwise I think its healthy. Flea beetles for blame for the holes possibly? 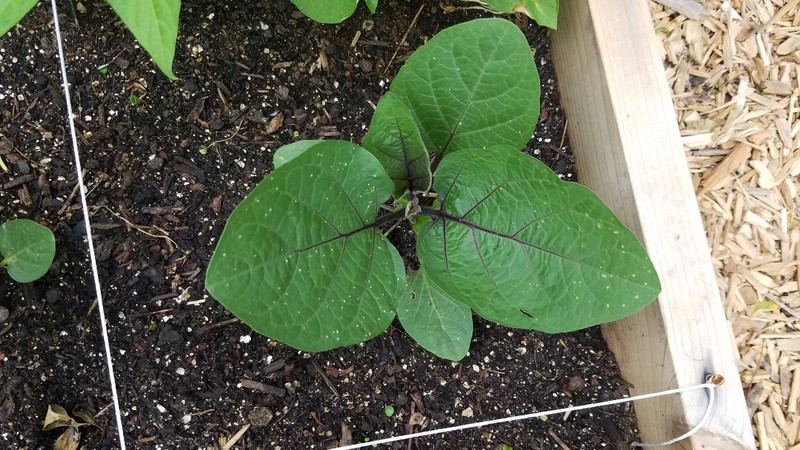 Your garden is sure looking nice!  It doesn't look like that cold front that blasted me last week got to you.  Yeah, broccoli get big and I do not know how people grow them or cabbage or brussel sprouts at 1/sq.  Maybe there are small varieties???  I have 4 plants per 3x4 and the leaves are already touching one month after transplanting.