Wow. I haven't been keeping up with my thread!

I already got frost, early, twice, but it hit the garden patchily, so there has still been some summer veg happening. There is frost forecast for tonight, so I've covered the porch peppers with fabric, threw a plastic tub over the Vietnamese coriander, and tried to harvest the remaining tomatoes, peppers, eggplants, tomatillos, okra, and ground cherries.

I saw a shy little salamander in my garden! But it was back by the Jerusalem artichokes - where I will soon by digging everything up. I hope it will be ok.

I pulled some of the leeks and put them in wet peat in a bucket in the garage. They aren't overwintering types (Dawn Giant and King Richard), and they were in the garlic-bed-to-be. I think I'll actually get the garlic in on time this year!

I got my lettuce seedlings transplanted, but not my beet seedlings. Not much time left before the Persephone days... I just haven't been on top of things for fall/winter this time round.

I also, inspired by Scorpio Rising's cleanup post, have been trying to clean my garden up. Weeding, pulling the dead vines, topping off the beds. It looks a lot better, but still plenty to do.

I'm working on my garden plan for next year. The collards are getting bumped to the OSFG next year. I love them, but they are ending up wider than 2ft, so the planned 1 per square isn't working. Plus their height is awkward for my current covers to keep the cabbage butterflies out. Now that the back flowerbed has been cleared up I can get a photo of my 4x4 mostly covered by tulle, but with a collard and two Brussels sprout plants flopped out the back side.

You two are inspirational workers

I also harvested my celeriac. I can see that I should have watered the celeriac more (they are smaller than they could be), but I got more than enough. I'm trying to decide how to, and how much of, the stems/leaves to preserve. Looks like blanching+freezing, and blanching + dehydrating are both options.

Here's my covered bed with an upright Brussel sprout, tilted collard, and flopped Brussel sprout sticking out the back side because they wouldn't fit inside. 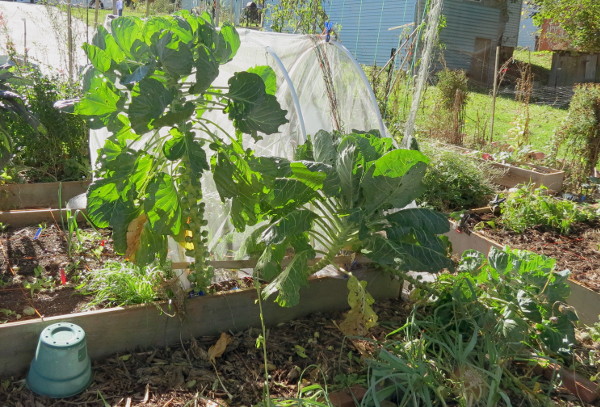