May Avatar: Not Just Veggies! (click this)
Welcome to the Official SFG Forum
!!! Happy Gardening in 2020 !!!
Search
Latest topics
» N&C Midwest—October 2020
by OhioGardener Yesterday at 7:07 pm

» Percent of worm castings in soil mix
by yolos Yesterday at 6:18 pm

» Adding a "trowel full" of compost? Really?
by GardenLikeMad Yesterday at 11:46 am

» Recommended chippers for small-scale composting?
by yolos Yesterday at 1:00 am

It's June and I picked the last of the sugar snap peas today.  They didn't make it into the house. Time to pull them and replace with pole beans.

Lettuce is gone but I'm going to start some more in the shade in the next few days.  Squash has it's first bloom and the cukes have put out some climbing tendrils.  The tomatoes have started blooming and are being trained up their ropes.  Pepper are all coming along and the early yellow cayenne has a bloom.

I pruned the calamamsi and key lime trees so I can get them into the hobby greenhouse next fall.  The plan is to keep them between 5 and 6 ft. tall.  I just hope some year they actually bloom and bear fruit.

Keep us up to date on what your garden is doing.

Still doing more building than planting, but the zucchini are still coming along (we have eaten 2 but that was yesterday so I guess that counts for May). The Cukes are about 1/4" - 1/2" long, the pole beans are at the top of the 4x4 and soon to be making the turn onto the pergola - woohoo. Hopefully they survive...the leaves on the bottom 1/3 of the plant are turning yellow and falling off. Not sure if that is normal or a sign of blight or something else. I think the peppers are a bust this year. One plant is buried in a center square under lettuce, swiss chard and tomato plants. I thought about moving it but the other one I moved isn't doing much either.

Kay, are you planting the lettuce from seed?

I pulled my peas a few days ago cause they were done. I thought it was due to weather but while pulling I found lots at little green bugs that I found out were pea aphids.

I'll watch out for them in the fall so hopefully I will get more peas. Our carrots are pick and I'm now debating about planting more but running out of squares to put them in. My father in law pick our first 2 crooked neck squash yesterday but they could of grown a week or two more. Oh well he is just excited that the garden to starting to produce. Our yellowing beans are about ready to be picked as well as our first cucumber. Tomatoes all have flowers and most have some green tomatoes too. Our sunflowers are showing their flowers heads but haven't opened yet. All in all our garden is growing great minus the green beans the bunny family got too but that box has a nice new fence around it and the green beans are slowing putting out new leaves.

Side question: Has anyone ever experience Japanese beetles on their sunflowers and corn? I have about 4-5 a day he I pick off and put n a Ziploc bag. I always thought they went after roses, crape myrtle, and ornamental trees.

Headed out to work so no time for help.  Yep, Japanese beetles have arrived here also.  Mostly they like my rattlesnake beans and the leaves of one type of flower.  Tried sucking them off with shop vac but they can cling to the leaf real good so that was not much help.

@mschaef wrote:I pulled my peas a few days ago cause they were done. I thought it was due to weather but while pulling I found lots at little green bugs that I found out were pea aphids.

I'll watch out for them in the fall so hopefully I will get more peas.

I also had those little green aphids.  But the pea vines were turning brown because of the weather being warm or the vines reaching their maturity.  There were not enough aphids on the vines to make them die.

Upper 90s to 100 over the last 5 days.  Took a toll on everything. I finally stopped by the thrift store and got some sheers to shade the beds.  Squash, cukes, eggplant not doing well but shade did help. 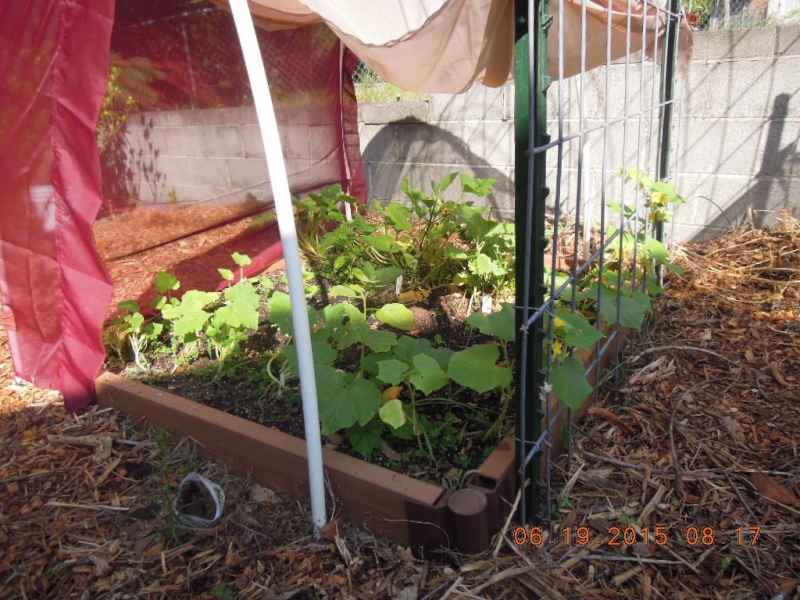 The beans are doing well.  Some of the seed saved from last year was moldy so I overplanted, but looks like most germinated.  A couple of new zuke sprouts and the the kale is coming back after top dressing. 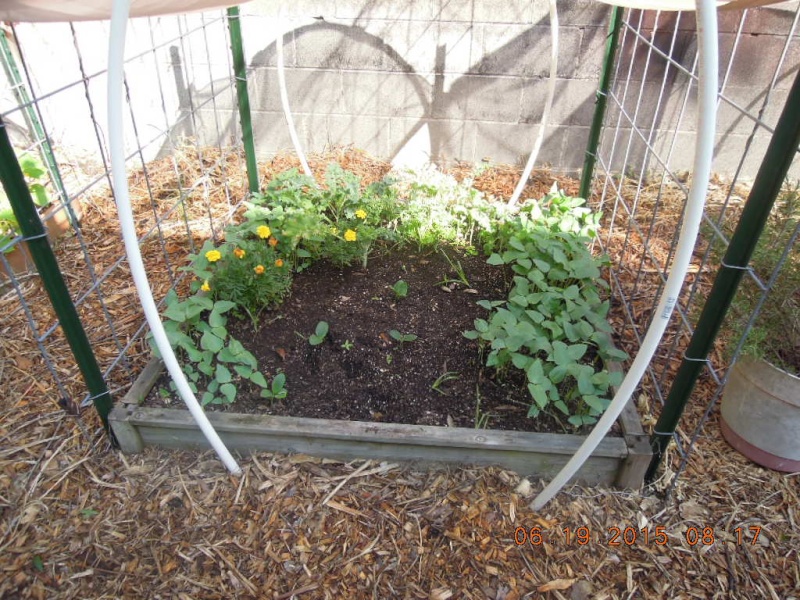 Letting some bok choi and mustard go to seed.  New zuke plants are up and the cukes are not doing well.  Shade did help some. And I planted a few more seed on the back corner. 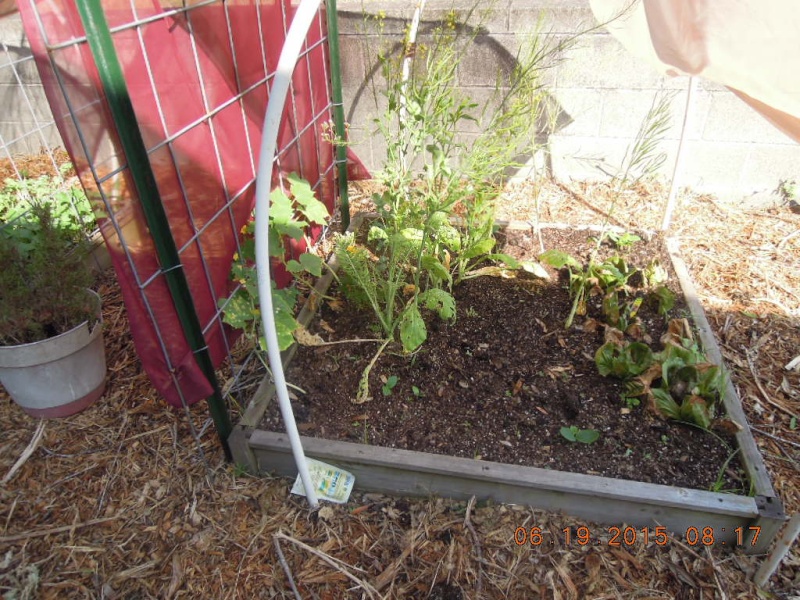 Fig bushes are doing ok in their buckets.  Gave them a good top dressing. 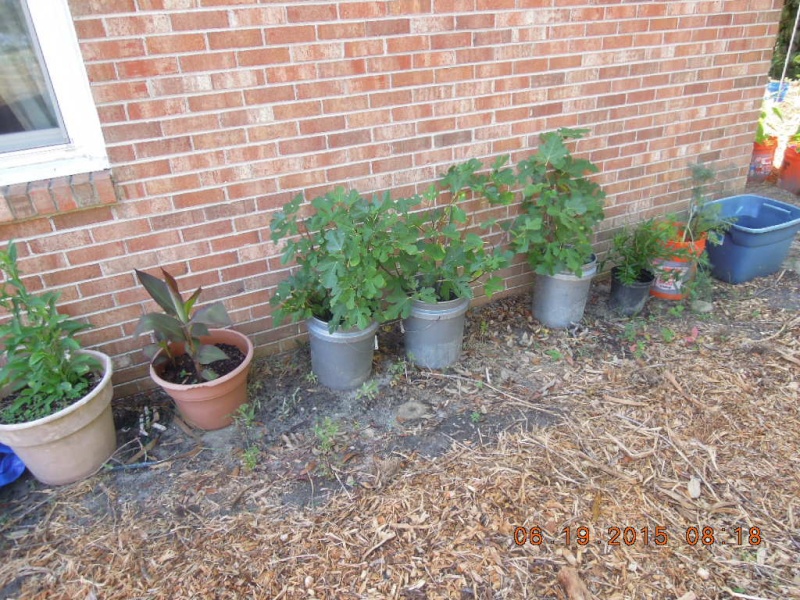 The greenhouse frames are doing double duty.  When the temps hit 100, I bought some shade cloth from Lowes and attached to the tops.  Now I'm weaving a trellis on the the sides for tomatoes and some newly planted buckets of armenian cukes, which are supposed to stand up to heat better. 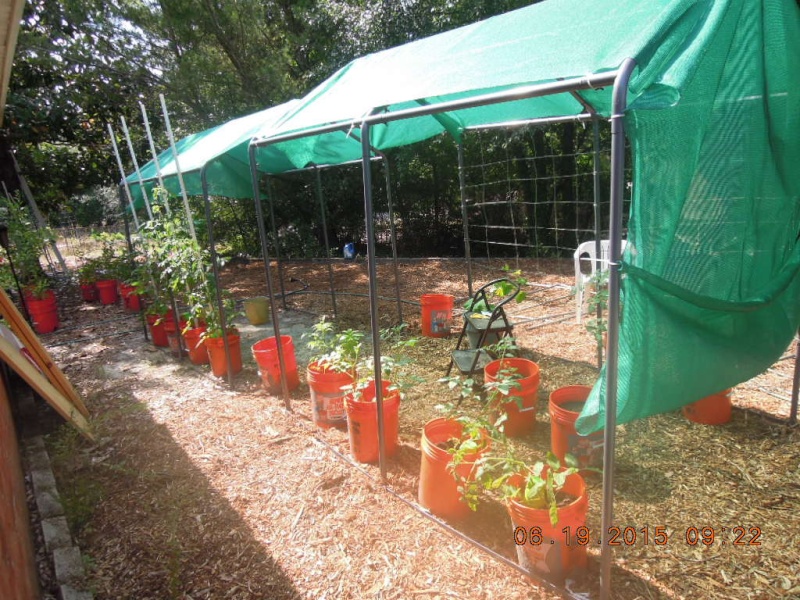 another view of the greenhouse frames.  camera fogged over from cold house to hot muggy outside.  Other pictures taken after the fog dried out. 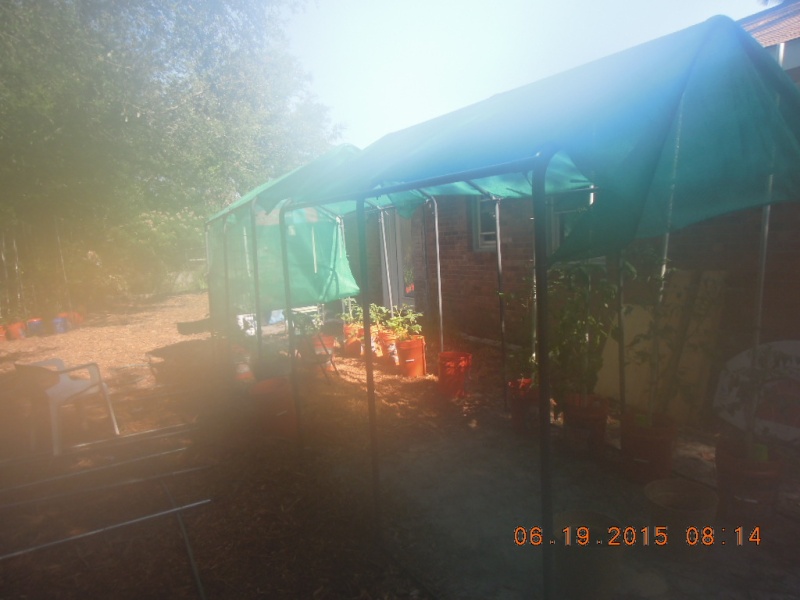 An experiment.  Bought some marked down asparagus roots and put them in this flower pot.  Will look for a permanent home next spring, but I just wanted to see if they would come up. 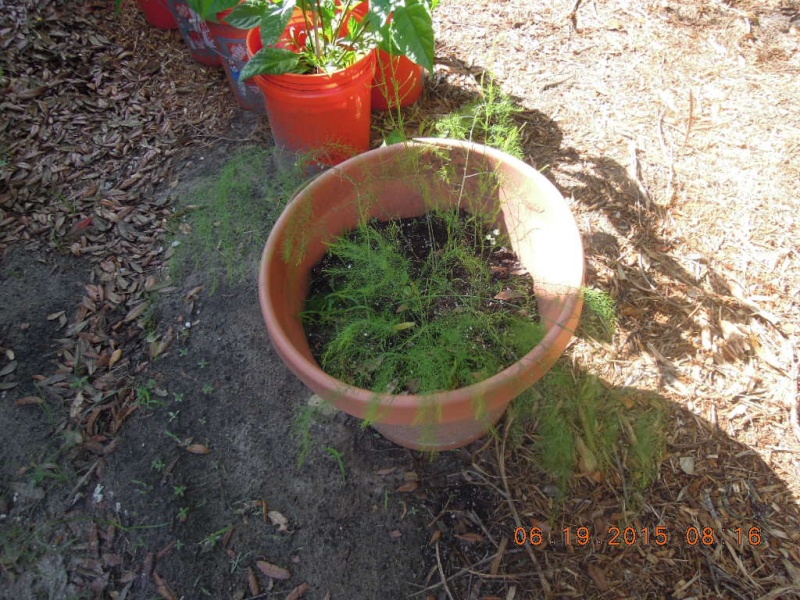 And the pepper buckets are doing well.  I already have some peppers on some of  them. 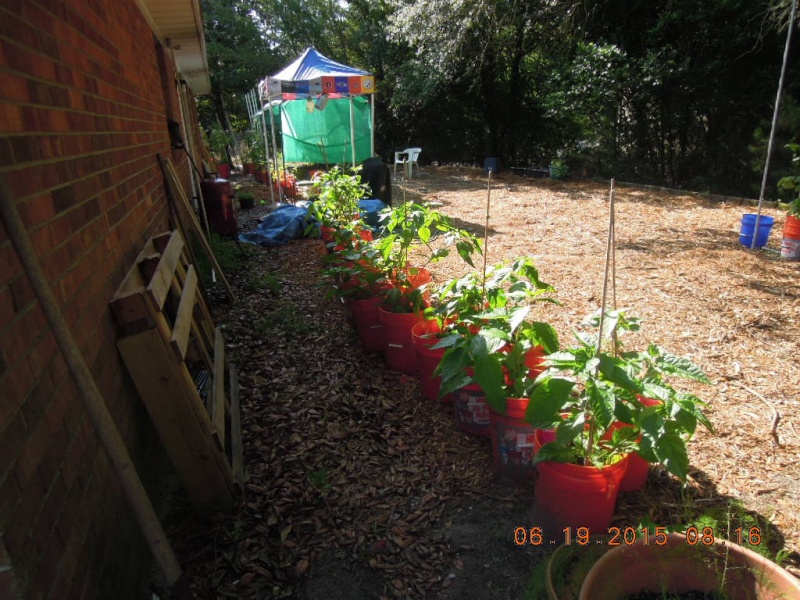 The tomato bucket brigade is doing well.  They are on the edge of shade from the big pin oak tree. 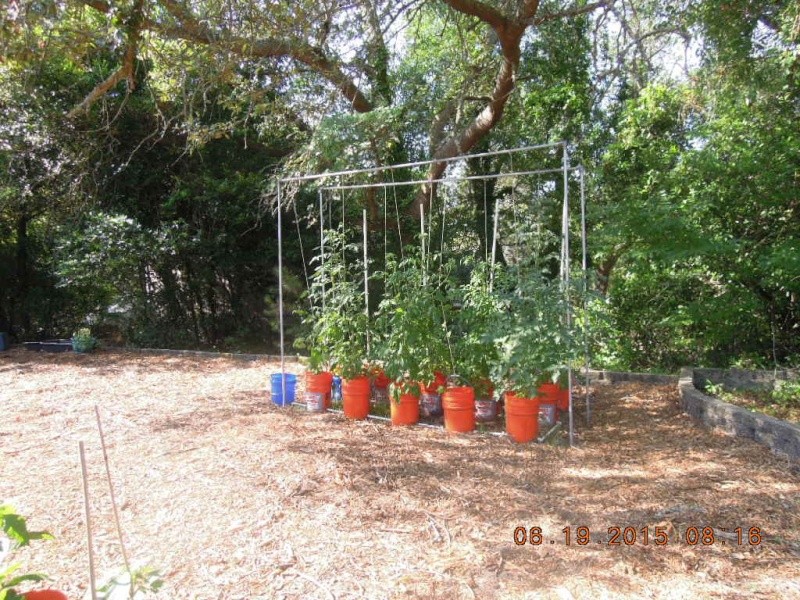 And my lettuce has sprouted in the shade.  Hope I can get a cutting or two before it gets bitter.  A third tub is awaiting seeds in about a week.  Hoping to get bigger than micro greens but small than spring lettuce. 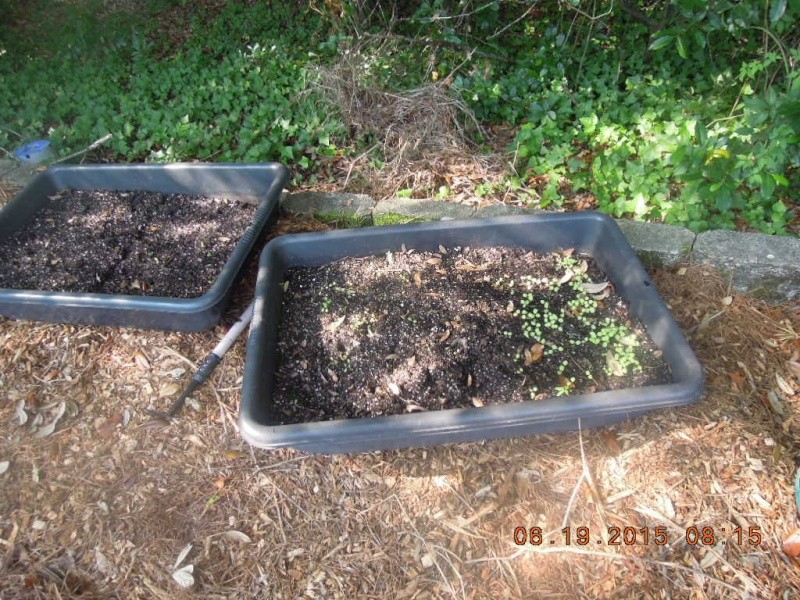 That's my garden this morning.

Wow, you have done a lot of work there.  Is this all at your new home?

I am interested in the shade cloth you purchased at Lowes.  Can you be a little more specific on the exact name of the cloth.  Also, is it intended for shade or did you repurpose it.  How much light does it let in?  Can you leave it up and get enough sun thru to benefit your plants.

Kay, do you cut those figs all the way down every year and bring them in?

It may provide more shade than I anticipated, but something had to be done immediately.  All my plants were looking half dead in the middle of the day in spite of watering every morning.  Saw improvement the very next day.  High noon sun now and nothing is super wilted like before.  Plants are on the outer edges so not completely blocked from all day sun so I'm hoping.  I didn't want to cut the shade cloth, so the excess is hanging on the west side.

Cape Goddess,  this is just the second summer on the figs and my first attempt at growing them.  They were just 1 in high seedlings when I planted them last spring.  Normally figs are hardy in my zone, but because they were in buckets I put them in a straw bale corral next to the house foundation this past winter.  Now I'm looking for a permanent spot for them.  Will probably plant out in the fall. Three different varieties

Kay, you've done some beautiful work.  Wow, I'm so impressed!  Thank you for sharing your photos.

I smiled when I read the quote you have about a weed being a flower in the wrong place.  I just posted a question about a mystery plant in my garden... and when I posted it... I remembered your quote.  I'd forgotten who quoted it... but I just saw that it was you!

I really like your set-up, Kay. Your frames and trellises are so sturdy, neat and organized.

@Marc Iverson wrote:I really like your set-up, Kay.  Your frames and trellises are so sturdy, neat and organized.

Well at least it helps justify the cost of the greenhouses.  Those frames are from two that my son used for the past 2 winters for the citrus trees and his hot pepper collection.  The covers are in the shed for the coming winter.  If I remember correctly, I paid $199 each for them at Lowes.  Greenhouse prices have gone up considerably.  The trellis is just jute twine strung on the frames.  I have to get out again tomorrow morning to finish the job.  I can only take about 2 hours work from 6-8 until this heat breaks.  Older age is the pits.

Working on ideas for TTs to go inside this winter and still leave room for the citrus.  I have a smaller greenhouse that I'm bringing from the old house which can be used for the peppers IF I SO DESIRE.  Or for extending fall greenery.

I think it is time to sell off, give away some of the dozen calamansi plants.  I'll keep a few and the 2 key limes. 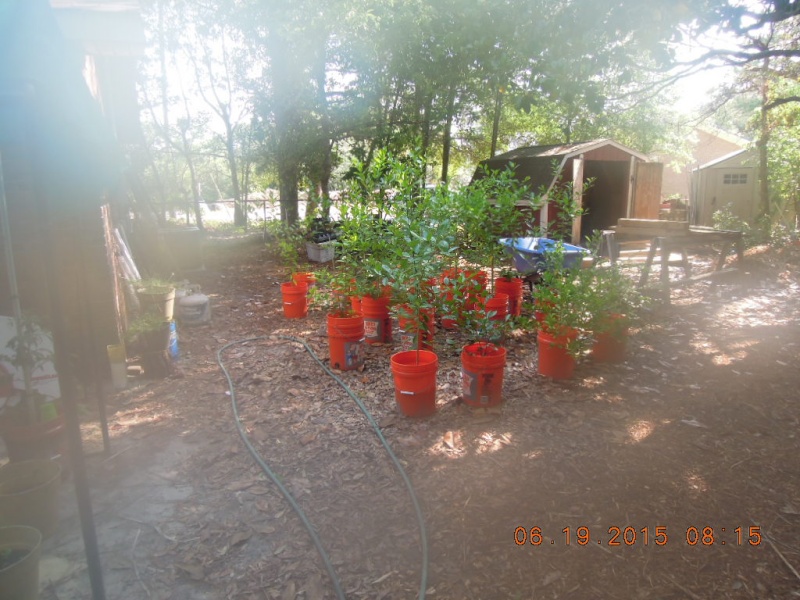 The smallish, easy to assemble greenhouse-in-a-box types tend to rocket up and down in price seasonally. One day I'll manage to match up some free cash with noticing a good sale in time.

Your types look more like permanent installations. For $199 they look very solid.

Last week I was at cub scout camp all week helping out and boy did my garden get pushed to the side. Now that I'm some what recover I have a mess to deal with. Bugs at the wazoo. My corn blow over twice. Squash, zucchini, pumpkins, and cucumbers have powered mildew. also my tomatoes are getting bigger than they were suppose to. I got cherry tomatoes but that are about the size of a soft ball. Now if it would just cool off a bit I can get to work saving my garden...

Good luck on the powdery mildew. I can never get ahead of it for more than a day or two at best before it comes roaring back.

Well at least you came back to the pleasant surprise of huge tomatoes. Not bad! And cherry tomatoes are so productive, if you get big tomatoes on those you'll be in tomato heaven.

@mschaef wrote: I got cherry tomatoes but that are about the size of a soft ball.

That really made me laff! I can't even imagine that. Photos please?

l post pictures tomorrow. As for an update on my garden. My pumpkins are dying due to vine squash borers laying eggs in the vines

. My boys are upset but I told them we still have time to re plant to get Halloween pumpkins. Tomatoes are finagling blushing so exciting. Which if you remember a few years ago I never would eat a tomatoes grew them for my boys but never ate them... well I do now.