Turned off the drip controls,we got 1 1/2" last night, with more to follow. I hope this becomes another "miracle March" for all of us who are in areas lagging behind.

Yardslave wrote:. . . I hope this becomes another "miracle March" for all of us who are in areas lagging behind.

in the mountains and moderate, continuous rain

in the Valley, perfect for the farmers. Some harsh winds in some areas.

The burn areas, like the Creek Fire,, near Fresno, will be bracing for landslides.

This is the most scary thread i have ever read. i just read from beginning to end - right from 2015. i kept looking at the dates i read

. not much difference today!!!

while i understand commercial farming uses most of the water, i am surrounded by teens n children so i have to set an example. so i do go to extreme lengths to drive the point home.

we recycle our water.

anyways brand spanking newbie here. my roommates planted a garden here so i am taking care of it. winter will be my time to plant my sfg. meantime getting my supplies ready while researching and sooo much learning!!

Hi Clay, you must be in the Redding area. ?? I'm down in Fresno, Zone 9A, bracing for the coming heat wave.

We are not supposed to discuss politics on the Forum, but if you are interested in the history and back room story of the drought, PM me for a link to a Facebook thread regarding CA water.

Thanks Sanderson for the heads up. Not talking about politics here. Just what I see around me. Near Sacramento area. Visited the river the other day and was shocked at how low the water was. The trees here don’t look healthy at all, many drying from the top.

3 or 4 years ago lived up in the foothills through the big fire n had to be evacuated. first time bought n95 masks.

don’t know if it’s overkill but before SFG book i was studying the temperatures here trying to figure out frost dates n planting dates as i’ve lived here for 25 years n i see the climate be so different now. Cant remember such intense summers so early on.

I can't believe how early summer got hot for us this year.

Really fills me with worry about the future more so this year than any previous ones, going to have to completely rethink my garden I think

Our dam system was designed to hold enough water to get through 4-5 years of drought.  Doesn't help when they are emptied into the Pacific Ocean.  First photo 2018 following a great snow melt, second photo April 2021 and the third photo just last week. 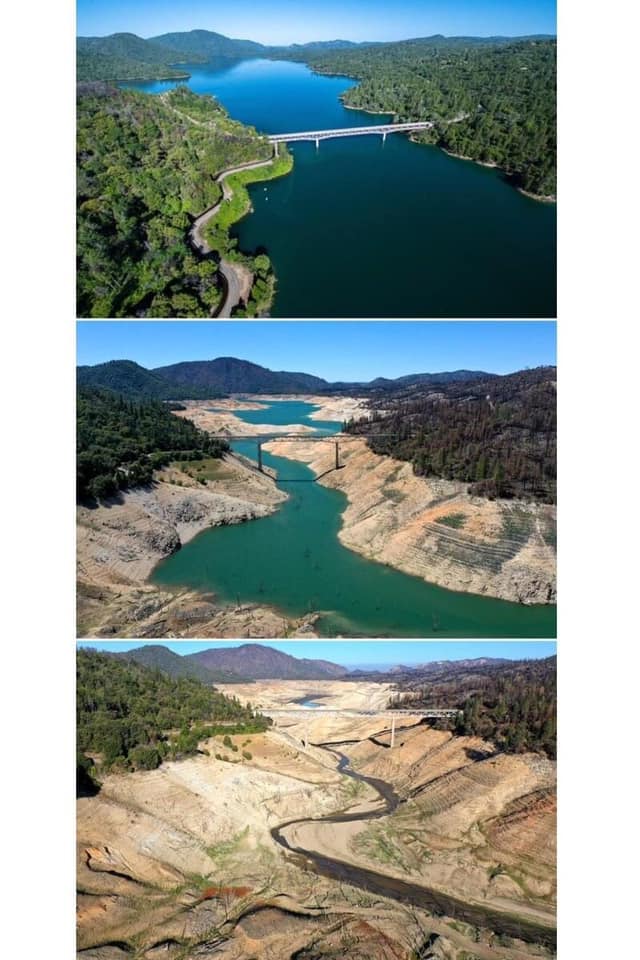 That's a huge difference even from April, way to scare me even more haha.

Do they purposefully drain it in to the pacific ocean?

Example: The Oroville dam and hydroelectric plant was built so that water that has flowed from the forebay to drive the pumps and generate electricity during the day, is saved in an afterbay so it can be pumped back uphill to Lake Oroville during the night (off peak hours) and reused the next day when peak use demands maximum electricity. It's a clever reuse and reuse of water. Of course, the afterbay inlets to the uphill pumps are now above the afterbay water level so this clever design is worthless.
____________________________

The two central coast lakes that serve the Monterey region of the Central Coast are incredibly low.
Naciemento lake is at 7% capacity, and San Antonio is at 14% capacity, and the sad part is that no water restrictions have been instituted yet. My guess is that the light bulb will come on when mud starts pouring out of our faucets.

Sad part is that the two dams release water for farming throughout the Salinas valley, as well as providing drinking water for the county. I fear that of this continues. California may become America's new Dust Bowl.

I was talking to one of our members earlier today and they mentioned California almond orchards.  It surprises me when I am faced with the fact that national news is so cherry-picked.  How must people view my State?  So, I decided to break one of our rules about politics.  Yep, I'll self ban myself to the stool in the corner afterwards.  The following are facts.  Not feelings, thoughts or propaganda.  Just facts.

California is not experiencing a real drought.  As I have explained earlier, our dams, and hydroelectric power plants than many of the dams have, can store enough water to get through 5 "drought" years.  That includes water for people, industry and agriculture.1  You see, the early fathers of CA realized that the soil was exceptional and the eastern mountains provided fresh, cold water every spring thaw.  If they could capture some of that fresh, cold, clean water behind dams, not only would it help with flooding when the mountain snow melted, it would also be a reservoir for several years' worth of water in "drought" years.  When the tectonic plates crashed, they formed a unique area called California.2  Just a result of natural activity.

So, why are our the dam reservoirs dry?  Because 5 years worth of stored water was released into the Pacific ocean within 18 months.1  Just a fact.  Why?  Now that is a political hot bed.

The result?  Farmers in the most fertile soil in the U.S. can no longer receive even 5% of their annual allotment.  Forced from using flood irrigation to using drip lines, the water table began to drop as farmers and cities pumped the water from the ground.  This has caused some towns and water delivery canals to literally sink.  People who relied on our agriculture became unemployed, and all the social trauma that results from unemployment.  The shutdown of the Keystone Pipeline immediately caused over 10,000 people to lose their jobs.  Now, remove just the CA almond orchards and 10X that number, or 100,000+ people, would lose their jobs.3

13% of all US Agricultural production is based in California alone. California is the nation’s largest Ag producer and exporter – exporting around 28% of its volume, which alone is about a $22 Billion sector of the California economy. The rest of California Ag goes to feed the nation as a whole directly or as part of intrastate trade. California leads and feeds the world with its farmers.
California is the nation’s sole exporter of many agricultural commodities, supplying 99 percent or more of the following: almonds, artichokes, dates, figs, garlic, kiwifruit, olives and olive oil, pistachios, prunes, raisins, table grapes, tomatoes for processing, and walnuts.

1  Facebook - The CA Water For Food and People Movement

Sanderson, I just read an article in the local news this morning about how they are going to use Lithium Mining operation to rescue an "dying lake" in southern California. What makes the idea a little suspicious is that it is being funded by GM. 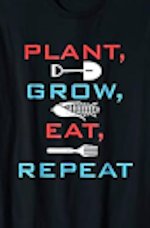 What a depressing area, and then to have mining operations! Rechargeable vehicles are being pushed in CA where rolling blackouts occur. CA, the land of unrealistic programs with no thought to the back end of the programs.
____________________________

I don't think that anything else can be done with that "lake" since the developers (aka. Real Estate Vultures) left and, unless the Colorado river breaches again, it will dry out completely and become another salt flat like the rest of the inland vernal lakes. My area's water supply is dwindling and we have recycled waste water to make up for the tug of war between the for-profit Water company, a local start-up public water system, and the farmers. Our coastal waters offer an unlimited supply for desal projects, but no one wants to open their wallets for a desalination plant that isn't ham-stringed by environmental red tape.

California is in a drought, we are in a 20 year Mega Drought. Not unusual in California's tree ring history. We have trees that are as old as 5000 years and the tree rings show that 50 year droughts are not uncommon with some lasting as long as two hundred years. The rings also show that the 20th century was one of California's wettest centuries. Climate change is exacerbating the the problem since we are now not sure what the new normal will be but models have predicted droughts will be worse.

The reason they released all that water from those dams is that before the spring melts the reduce the levels in the dams to prevent to possibility of the dams overflowing with a sudden large influx of water. The problem is they don't have enough dams in the system to hold all the water during wet years. The system was built decades ago and is insufficient to support California's population now.

The lithium is a byproduct of the geothermal power plants around the Salton Sea and was just pumped out into the lake. It has always contained Lithium, but now there is Gold in that there water so it is now a viable business model to start extracting the Lithium from the water.

This drought could go on for many years, and there is most definitely a shortage of water, They will be cutting water supplies to Arizona next year from the Colorado river allocations. Lake Mead hasn't been this low since it was filled.

I was reading that farmers are allowing fields to go fallow in order to use what water they are rationed to feed water their cash crop the almond trees and that is causing a shortage of tomatoes.

Bottom line is we need to start changing are habits and the ways we waist water in this state, we could use much less water by adaption our farming practices. Lawns were originally planted to imitate Europe's wealthy and are water sucking, ecological dead zones. It's only a matter of time before the orders to stop watering lawns occurs.

I quit drinking almond milk and eating almonds. I am in the process of solarizing my lawn to replace it with native California plants that will only require watering every 3 or 4 weeks once established. Its a Win Win Win Win Situation. It will save water, It will help with saving our native plants, it will provide food for our endangered Native bees, and since Native bees are 100 times better pollinators than Honey bees, my vegetable garden will be more productive and it will provide habitat for all manner of critters. I guess I should have added another win.

I totally agree we must adapt our watering with the climate. Israel has managed to turn the deserts into croplands, if they can do it , we can.

CA has plenty of water for people, food and recreation/industry.  It's just being badly, badly managed.

Water lost to the Pacific through the SF Bay just in July 2021.
https://www.facebook.com/groups/CaliforniaWaterForFoodMovement/permalink/2915990675284679

Other areas that needs water badly are the coastal and inner coastal valleys and mountains. Drive the H-101 from Gilroy to almost Paso Robles, and it is amazing to see the fields of produce destined for produce isles at the grocery stores, restaurants, processing plants in CA and many other states. Where there are fields, there are people. Cold, clean water from the Northern Valley needs to be piped to these areas and out to all the communities from the coastal mountains to the coast. Water is way too $$ expensive in some of these communities.
____________________________