» Catalog season has begun!
by Scorpio Rising Today at 5:47 pm

We purchased a variety of corn that says to space seeds 6 -10 inches, so I'm planting 2 seeds per square. My question is - can I also plant a bean in the same space so that it grows up the corn stalk or is that too much in a square?

We planted four corn per square foot, and one bean per square foot at the borders between squares. It seemed to work fine and we could probably have grown more beans. I'm glad we didn't, though, because all the corn was picked before the beans were ready, and the bean vines (or whatever you call the climbing bits) ended up pulling down the dead cornstalks. We had a cooler summer than expected and the beans took longer than they were meant to. 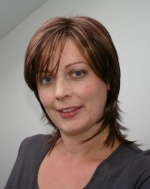 Good to know daisy. Got that bit of experience filed away for when I am ready for corn.
BTW, how much corn (garden size) did you plant and was that enough to get full ears of corn? It is hard for me to imagine beans that harvest later then corn.

To ensure good pollination (and corn!), you should plant corn seeds close together (4 per square foot) over a big area.

Plant a lot of seeds close together!

We planted 12 squares of corn in a 3 x 4 block. Everything grew, although the front row was much shorter than the rest, and we got one big cob or two little ones off each plant. I learned since then that I should have removed one of the little ones to allow the other to grow larger, but ignorance is bliss and we were still really happy with our harvest. I did cut the top off one stalk and used it to dust around the silks to help pollination. Can't tell for sure if that helped, but I don't think it did any harm anyway.

The beans were borlotti beans and purple pole beans. I don't know what happened to make them grow so slowly, but they did eventually get there! Could have been my erratic watering schedule before we got the irrigation set up, I don't know...

Thanks all for the input. The confusion came when I read another SFG board where someone said the number of seeds you plant depend on the type of corn variety. Some seeds are specifically for home gardeners and the plants are shorter in height (under 6foot stalks) and those should be planted 4 per square. Seeds that result in plants 6-7 foot stalks should be planted 2 per square and seeds that result in over 7 foot stalks should be 1 per square.

All of my seed packets say the stalks will be between 6-7 feet tall and that seeds should be spaced 6-10 inches apart -- thus resulting in my confusion when Mel indicates we should plant 4 per box.

I started off with 2 per box plus 1 pole bean in the center of the box. Think I'll add another 2 corn seeds per box tonight!

Your confusion is understandable. The three types of corn you describe by height, are also known as short, mid, and long season corn varieties. I first heard of folks planting 4 to a square last summer in the old forum, and I was appalled! There's just no way, I thought! I have a favorite long season variety that I have grown for years, one per sf; I wasn't aware of the smaller varieties.

Here's the root structure of a tall, long season corn. You can see why I couldn't fathom the idea of more than one per square! 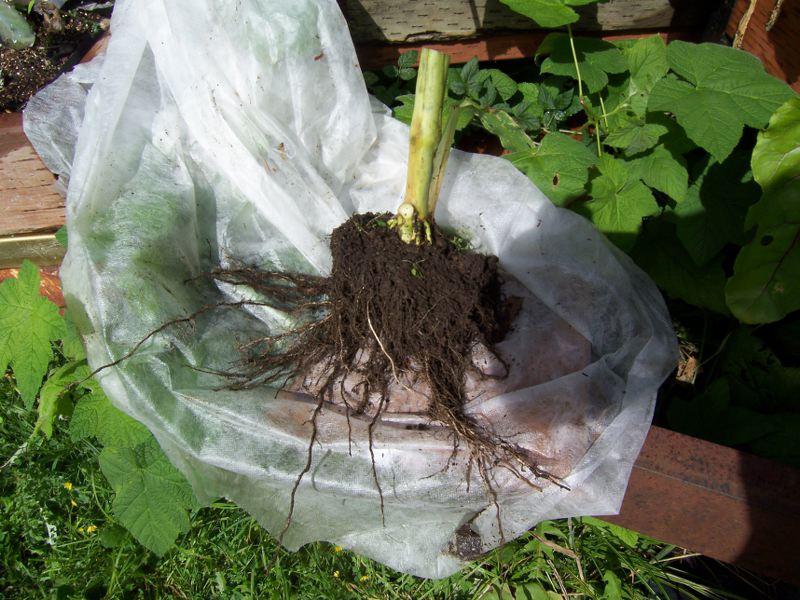 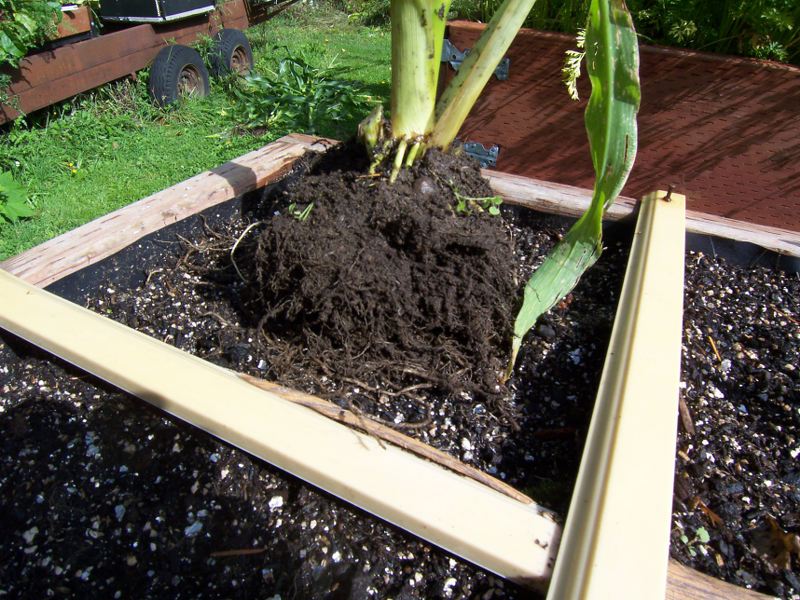 Boffer - if my seeds are the mid variety, do you think 4 per square will crowd them too much. Looking at the root system of your longs, I would say 4 per box is a baaaaadddd idea....

I don't have any experience with other types, but I'll offer my opinion anyway! I agree with you, 4 would be too many. Corn is a heavy feeder, so a little extra compost in those squares would be a good thing.

I would wait until your corn is at least about 12" tall - I found that the beans grow so fast that sometimes if they wind around the base of the corn they'll uproot new seedlings - so let the corn get established first!

I noticed that one person was saying they got 1 large or 2 small ears per corn plant.

Last year I planted my first corn, and most of the plants bore between 2 and 4 ears each - all the same full size. Most everyone I spoke with was highly surprised about that, so I went to the (Maryland) State Fair and asked the "corn guy" about that. After I explained my SFG to him, he explained why it worked that way.

2) I used almost pure compost. Since I had 16 c.f. of vermiculite and 16 c.f. of peat moss in 200 c.f. worth of volume, most of the "soil" was compost.
This allows the corn to never have to fight hard to find food.

3) The beds are under some high-voltage power lines, in the center of a 150' wide clearing.
So they get maximum sunlight: from about 8:30 until almost 6:30 pm each day.

4) I hand-watered the corn each evening, missing only if it was raining. And my bed is 2.5 feet tall (to avoid bending over).

5) I would hand-pollinate them, gently pulling off the pollen from one plant to then hand-sprinkle onto the silk of another plants ears.


Because the root balls were so large, It would make it hard to plant more than 1 per s.f., but I may try to do 4 per s.f. this year, just to see if I can compress my garden and grow more food without having to build any more beds.

You might wonder why I build them that tall:

1) Wild bunnies that come into my yard from the adjacent woods and briars. My kids love the little critters, and I'm not for the flavor of rabbit, so instead I build tall enough to keep them out. (There are no deer in this area, and roads/interstate would keep them from migrating into the neighborhood.) The only other herbivore is a ground hog, and he can't get up there - plus he has plenty of grass and clover to share with the bunnies.

2) Removes the need to bend over as much.

3) Reduces the seeds blown in by the wind. When the dandelion war moves to near the raised bed, I've less weed seedlings to pull out.

No pictures from last year, but I'll try to get some from this year. I'll probably starting planting corn in the next couple of days. If it takes a bit longer to germinate then that'll not matter so much, and I'll be trying to stagger a few plants each day, so that the harvest is then staggered as well.

Hm - Perhaps I'll try doing it both ways, with one section at 1 plant per s.f. and one section at 4 per s.f., and see which yields more corn per s.f.

That is fantastic. Did you plant a newer corn, or an heirloom one? I have planted to try the Three Sisters arrangement, am curious about how many corn to square foot, too. What I've read says that older versions of corn are bushier and take up more space, while newer ones can probably be planted 4 to a square foot. I've planted 4/sf, but I have an older variety, so I'm thinking I might have to end up thinning out later.

I planted a hybrid late season. This year I planted some starter corn plants, but have been putting in 2 more squares of early season every week or two. If I had a large enough space I'd plant a square every day, but there's only so much space, and I'm trying to restrain the time-consumption of adding in beds.

Whether it's heirloom or late season, it needs 1 square foot. But the early season (which grows faster and shorter) can be planted 4 per square foot. I use the lower-right corner, the center, and then the other two seeds go in along the middle of the right-edge and the bottom-edge of the squre. It looks odd at first, but if you plant an adjoining square then you can see that all the plants will be six inches apart from the nearest plants.


We have a lot of birds, so I'm considering building some cages to protect the plants when they're small. Once they're large, most birds won't bother them, and the few that "taste" them won't kill them.

Seems that birds aren't that bright, and in the early Spring they're pretty hungry. So... anything that might seem to somewhat resemble an edible worm or small snake or ... well they'll peck small plants to death occasionally. Eh - Bird Brains.

Thank you for the info! So far I have only one corn sprout, but it is early yet. Birds seem to be leaving everything alone, thank goodness!

The variety is Country Gentleman Sweet Corn (shoepeg) listed at 90 days... is that mid-season? Also, has anyone had experience with how tall this variety gets? The vendor's website has one review that reports 9 feet, I am curious if that is average.

If they were underwatered, I'd expect to see their leaves drying out and turning brown.

Are they a weack, limp yellow, or a dry and shriveled-up yellow?

My raised beds are 2.5 feet tall, and one of the benefits is that I can't really overwater - the excess water drains downward to the lower layers of compost. (I fill the beds with pure compost.)

I have trouble telling yellow from brown
It looks to be a pale yellow then the ends of the leaves turn brownish. I need to try and get some pictures up

Here are some pictures
Can anyone help me 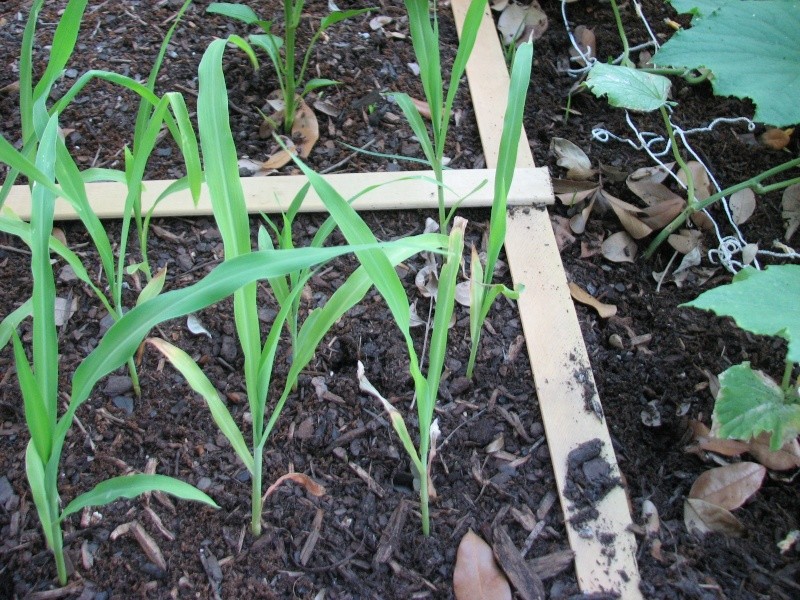 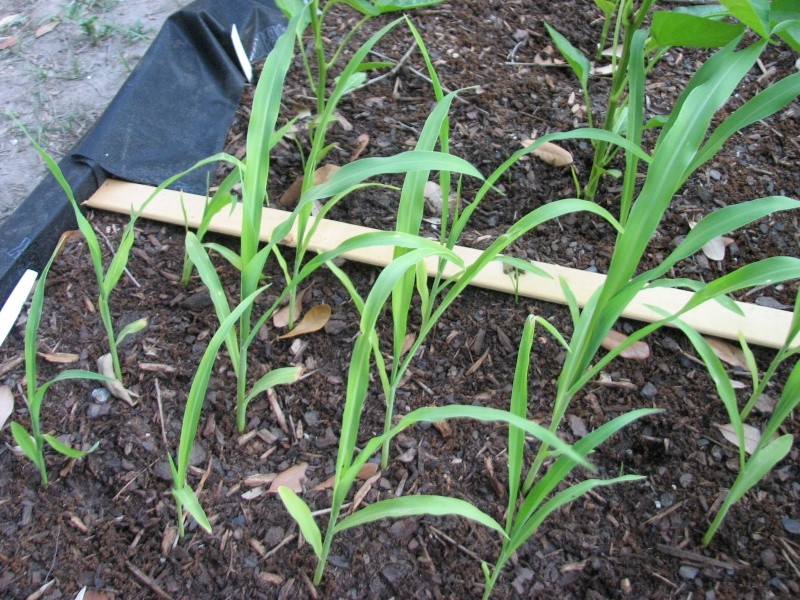 It looks like those that are browning were the first two leaves to pop out of the ground - yes?

If so, then they might just shrivel off and die as soon as there are enough "true" leaves.

I have some left over boxes in my potato box because my seed potatoes did not produce as many extra sprouts as I thought they should of. My box is 4x8. I used only have for the potatoes. This leaves me 16 sq, would I be able to plant corn in those boxes?

p.s...I know I can plant the corn....I guess the real question would be is it worth my time. I have a large family. I cook 24 ears when I buy them from the store.

You could also plant some pole beans in there so you can get a little extra crop. I will do that once my corn gets about 24" high