» Upcycling milk cartons into starter packs
by sanderson Today at 2:36 am

» Planting egg plant
by sanderson Today at 2:26 am

» My first crack at making tabasco sauce
by CitizenKate Yesterday at 8:18 pm

» February Avatar: Time to Wake Up!
by countrynaturals Yesterday at 4:09 pm

» Sixth Year SFG in Canada
by trolleydriver Yesterday at 10:15 am

» Happy Birthday!!
by AtlantaMarie Yesterday at 9:37 am

» February: What to plant in Northern California and Central Valley areas
by countrynaturals 1/26/2020, 12:32 pm

Last year, I did my first SFG box. Some things grew great (basil, peas, cilantro, cucumbers), and others not so much (lettuce, spinach, broccoli, tomatoes, jap peppers, melons, and especially zucchini). Most of the plants that didn't do well, I had a lot of growth, but not much fruit. I pruned the tomatoes, and they still got huge. They did produce some, but not as much as I thought they would.

My lettuce, spinach, and broccoli were all a complete bust. My cantaloupe plant spread like crazy, but I only got one fruit from it before the season ended (I let these sprawl on the ground). My sugar baby watermelons (on a trellis) produced a couple golf ball sized melons, but never went any further. I think the vines developed a disease maybe. The zucchini was the worst. They got really big, but produced fruit that wasn't pollinated. Then they got completely ravaged by the SVB. I tried to pick them out, but there was so many, I destroyed the plant stems. I tried to start over with some new plants, but it was too late in the season. What kills me, is the year before, I only planted 2 zucchini plants, straight into a dirt patch, and had zucchini coming out my ears.

I am using Mel's mix, but I used a compost I bought in bulk from a local organic garden shop. They said it was their own that they made, and included horse manure, grass, and other yard clipping, and other things they throw in there. I did give the tomatoes egg shells, tums, and epson salt. I didn't use any treatments on the garden last year except insecticidal soap.

This year, I have already spread some organic fertilizer, and I still have some of the soap spray.
So what else do I need to do different this year? I had read about using foil on the stems of the zucchini to trick the SVB. Any other tips/tricks/ treatments that you all suggest? 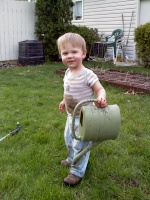 I should add that I have a 2 year old and another one coming in May, so I won't have a lot of time to spend in the garden this year. Also, I am planting a few different things this year, including full size watermelon, yellow squash, butternut squash, yard long green beans, cayenne peppers, eggplant, artichoke (not in sfg), blueberries, and tatume zucchini (round zucchini). So any tips on those items would be appreciated as well.

I have to go out every morning and pollinate my squash with a paintbrush. I've even seen bees out there sometimes, but I guess they aren't there often enough to count on them.

I'm learning that I have to keep on top of not only trellising/training the Tatume, but pruning it as well. It wants to put out a million vines in all directions. Doesn't seem to phase it when I take of side vines, though. Hand pollinated the first of those yesterday. I missed the first one and it shriveled up unpollinated. I feel for you on trying to get out there and garden while pregnant. Hopefully that'll be me within the next year and I keep pondering when the best time would be in terms of not letting the garden get out of control, lol. My 18 month old gets me up before his 3 and 5 year old sisters are awake and we go out and pollinate/trellis/prune/water first thing. He tries to do everything I'm doing, so a lot of plants have leaves they shouldn't be missing, etc, but they're surviving.

Have you tested your soil? It sounds to me that you have a phosphorus deficiency and possibly a potassium deficiency. Nitrogen is responsible for lots and lots of green growth. So, to me, if you are getting lots of green but not much fruit your levels are a bit off. You also might want to check your soil pH. You want a pH of about 6.5 .

You can get soil test kits at your local hardware stores, but they aren't the most accurate. Still, they can give you a ballpark idea of what is going on. For the most accurate you should contact your local agricultural extension office. They usually offer soil tests for free or for a very minimal fee.

Once you know what your levels are you can adjust accordingly using compost and fertilizers.

As for your SVB, cover your plants. This seems to be one of the most effective solutions, but it does require hand pollination.

I know of one lady who uses foil and swears by it, but I know of several others who say it doesn't work. I think the key is effective application of the foil.

Another thing you might consider is treating the soil around your plants and the stems of your plants with BT. The SVB will die before it can do a lot of damage. I've even heard of some folks injecting a little BT into the stems of their Zukes and Squash all in an effort to kill the SVB before it can do much damage. Just remember that you will have to continuously apply the BT. It washes away with water and degrades in sunlight. The bottle will give you instructions as to how often to use it.

Best of luck to you.

I started a thread in the Pests section
http://squarefoot.forumotion.com/t6109-an-ounce-of-prevention
It has a link to a discussion we had earlier here on the forum, the post I made on the linked to has a bit of info I learned last year while stuck on the couch from a back injury while the bugs devoured my garden. 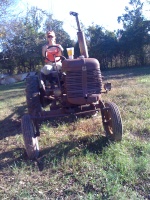 Here is the fertilizer I used this year, do you think that would help with the lack of nutrients?

And where do I find BT?

Bt is short for Bacillus thuringiensis.

You can sometime find it at Lowe's/Home Depot/Walmart. If not there you should be able to find it at any local garden center or feed and seed store.

Otherwise, you can always look online.