@Scorpio Rising wrote:A canoe would have really been helpful.

They are telling us now that we are going to get the remnants of Hurricane Florence by this weekend.

Finally got the tomatoes picked today and a lot of them had split open from all of the moisture. Most of them went into the VitaMix to make Marinara Sauce for dinner this evening.

I threw a bunch of tomatoes out.  Just not doing it....peppers, OMG!  Gonna see how and what to do with them here in a picture!  Probably pickling them!  Jalapeños, King of the North and Big Red, sweet bananas.  Tons.  Still a bunch on out there.

Ohio Gardener’s Recipe has been moved!

OG, your Tomato Pie recipe (which sounds amazing, by the way!) has been moved to Recipes per my request so others can enjoy it and use up their tomato bonanza if they are lucky enough to have one this year!  I am making it this weekend!  Sounds delish!

@Scorpio Rising wrote:OG, your Tomato Pie recipe (which sounds amazing, by the way!) has been moved to Recipes per my request so others can enjoy it and use up their tomato bonanza if they are lucky enough to have one this year!  I am making it this weekend!  Sounds delish!

Humid, warm here, but nothing like poor Carolinas are experiencing.  Need to mow and bale!  Good heavens...garden cleanup continues this weekend.  Beans done.  Melons done.  Pick lettuces.  Might try to get another radish square in!

Thinking of making pepper jelly with jalapeño peppers, and pickling some of the peppers???

About the same here, SR.  Picked a peck of Sweet Banana Peppers, which will be pickled and canned tonight, over a peck of bell peppers, many of which will be diced & frozen, and 7 pounds of tomatoes, which I don't know what we are going to do with them.

The leaf lettuce bolted to seed and I removed all of it. Have 9 empty squares which I applied compost to, and have ready to re-plant. Some of them will be filled with new Black Seeded Simpson seedlings as soon as they are hardened off - probably early next week, and some will be filled with radishes. The Red Russian Kale, Brussels Sprouts, Mizuna, Swiss Chard, and Tomatoes are still in full production and will be until a heavy frost kills them mid-October.

If it had not been for the raised beds, we would not even have had a garden this year because of all of the rain - what used to be the in-ground garden has been a swamp most of the summer.  But, the raised beds don't seem to mind the rain, and just let it pass through.

A few pictures of the raised beds today.

Those tomatoes are 8' tall, and have completely outgrown their Texas Tomato Cages 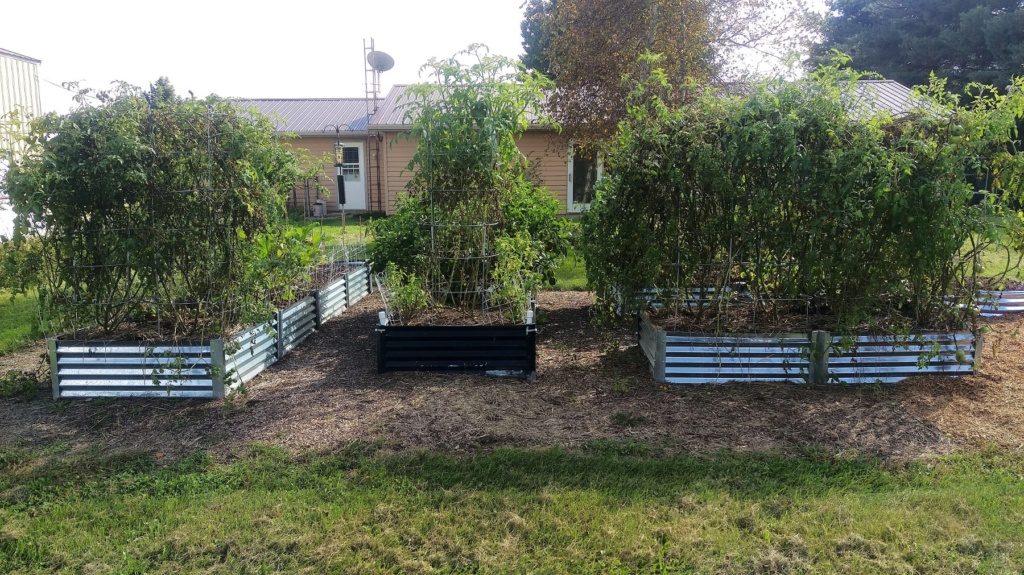 Some empty squares waiting to be filled. 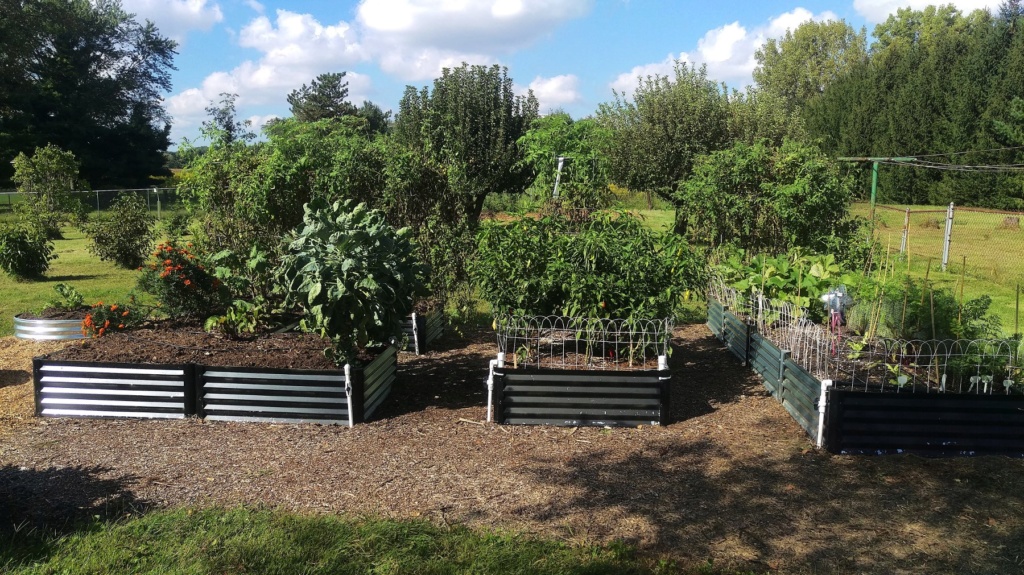 Had to fence off the carrots from the rabbits. 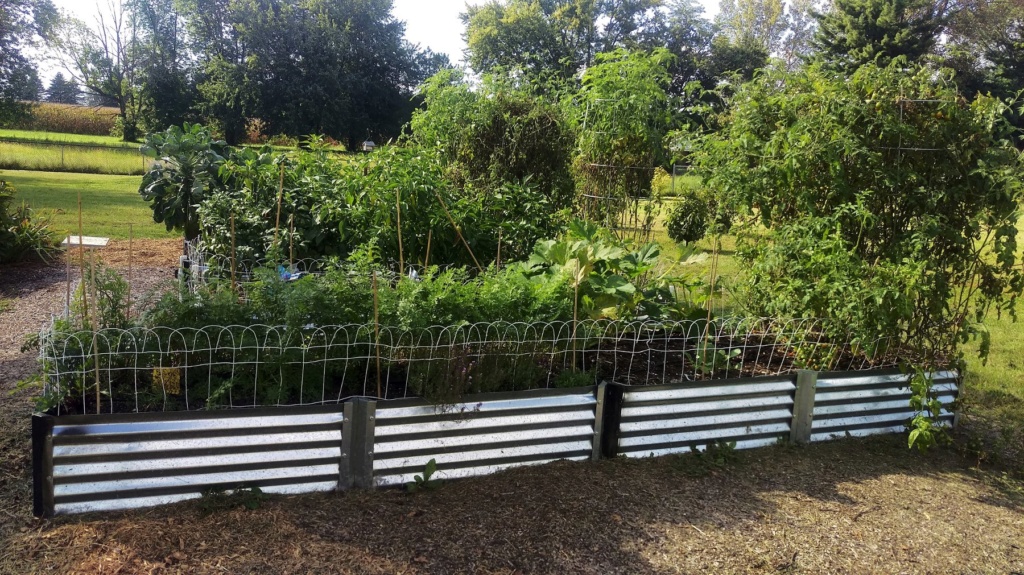 A couple new beds to get the Rhubarb out of the wet ground. 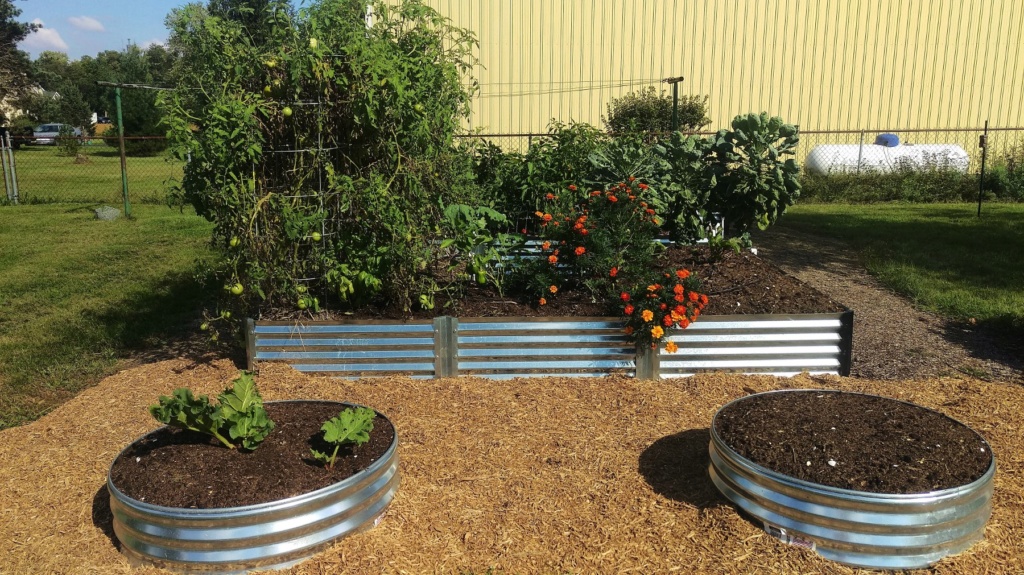 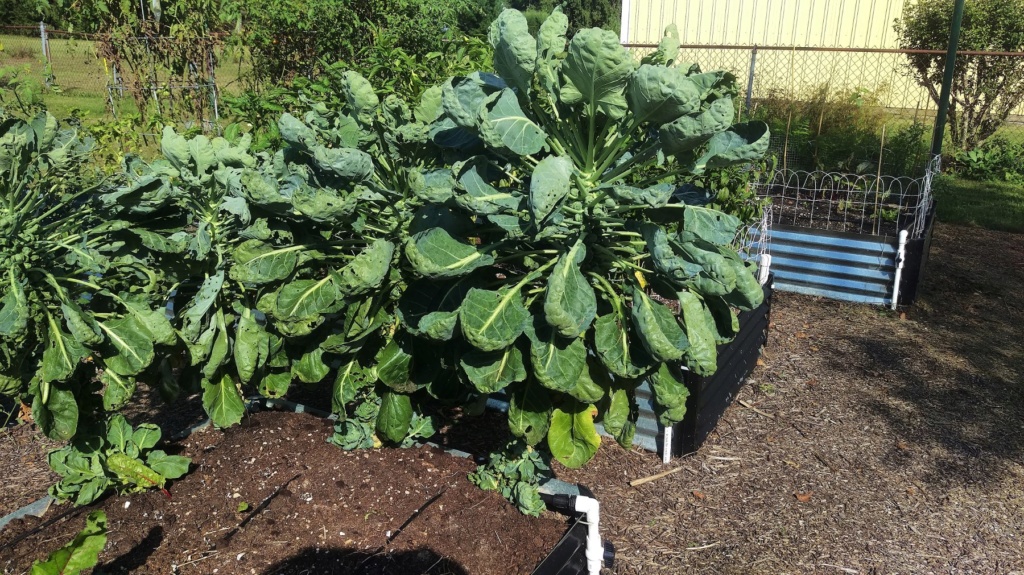 Lots of peppers still to harvest. The plants are over 3' tall. 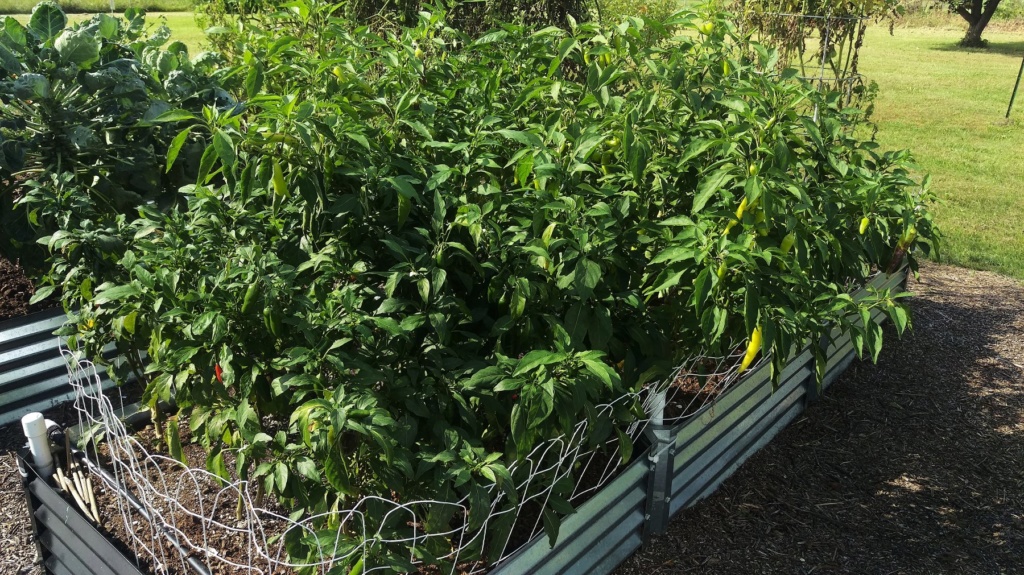 Love the pics!  Yeah, my original raised beds (old legacy boxes which I LOVE!!!) are like oblivious to the swamp that they are situated in.

I like your corrugated metal thing!  Tell me more?

@Scorpio Rising wrote:
I like your corrugated metal thing!  Tell me more?

Are you asking about the round corrugated metal beds?  Those are inexpensive fire rings that I bought at the local farm store (Rural King).  They are 36" diameter by 1' high. The farm stores normally put them on sale for about half off in the fall after the camping season ends.

Our rhubarb plants were dying from crown rot because of all of the rain we have had this year, and the ground never dried out - the heavy clay subsoil doesn't drain well. So, I bought two fire rings and filled them with modified Mel's Mix (added sand and Azomite, which rhubarb love), dug the few strong rhubarb plants that weren't yet affected with the crown rot, and put them in the new fire ring beds. They have really taken off since being moved to drier ground.

Great idea!  I was just thinking I want a dedicated tater bed...

I lost 3 rhubarbs in a row, moved them up on a slope by the pool area, hopefully the drainage is better there.  I love rhubarb!

Interesting that you would mention that!  That is how I got the idea to use the fire rings for the rhubarb - which we absolutely love, and always freeze a lot for winter use.  I was visiting with a friend that lives up north and near a river, and he was showing me his gardens.  I noticed the rusted fire rings with potatoes growing in them, and asked them about why he had those. He said that because their ground is always wet he could never grow potatoes without them rotting in the ground.  He got some used fire rings from a nearby campground that was being renovated and used them to grow his potatoes "above ground". He said he had never had such big beautiful potatoes in all the time they lived there. A bulb lit in my head, and I told him that might work for my rhubarb which was dying due to the wet ground this year. He liked that idea since he had never been able to grow rhubarb. And, since the rhubarb plants grow to about 3' across, the 36" fire rings are perfect size for them.

So, off I went in search of some fire rings...

September is HOT!  And wet here...

Slowing down out there.  Have some eggplants to pick this weekend, and maters and peppers.  Need to figure out what to do with all those peppers!

Maybe some freezable casseroles?  Will need to look in the search box!  I thought about pickling some.  But they are so sweet and lovely tasting....cukes and beans are over.  Like I said, might replace with a couple squares of redishes and spinach.

Garlic will go in a box that doesn’t lend itself trellis.  Need to start thinking about where stuff goes NEXT year!

@sanderson wrote:I freeze most of my peppers for winter use.  Wash and slice as they will be used and then vacuum seal for the freezer in smallish bags.

I know...I love freezing too, sanderson!  I just love the crunch of the fresh green-red peppers....they lose crunch once frozen but I love the ease of freezing!

I am going to do some clean up this weekend...it ends, but plans begin!

SR, use a few of your bell peppers by making baked bell pepper rings. I put the recipe we use with our air fryer in recipe section.

@OhioGardener wrote:SR, use a few of your bell peppers by making baked bell pepper rings. I put the recipe we use with our air fryer in recipe section.

Yum!  I will make those and the tomato pie this weekend, since the heat wave has moved on finally!

Spent a couple hours yesterday cleaning out squares in the SFG (legacy boxes) that were over.  Beans, cukes, 4 out of 7 tomato plants gone.  Did some weeding.  Messed with the compost pile.  Looks nice!

Gave my neighbors a bunch of lettuce and peppers.  Got a couple onions from my “convert” neighbs, they put up 2 elevated boxes after talking to me, and seeing what was happening!

Weather was cooler over the weekend, very nice.  Today, rain.

What’s going on out there, Midwest?

Warming up a bit again, but still autumnal.  September almost gone.  Wow!  Where did it go??

I still have a couple tomato plants out there, they look bad, but there are maters o ‘em!

Peppers still going!  Also, lettuces.  Radishes too.  And my eggplant has got to be getting cold!

Will try to get out there this weekend, at least for a bit!

We are still harvesting about a gallon of cherry tomatoes daily, though the plants are beginning to look haggard. Picking 3 or 4 large Golden Jubilee tomatoes a day from the 2 plants.  Harvested 1/2 bushel of Brussels Sprouts today - tomorrow they will be steamed and frozen for winter use. Still harvesting more peppers than we can use, and are giving a lot of them to neighbors. Had guests for dinner this evening, and we had prepared a large batch of Stuffed Bell Pepper Soup - all guests loved it, and wanted the recipe - served with a dinner salad of all fresh ingredients from the gardens. Not looking forward to the rapidly approaching end of the the gardening season!

I think I am going to make a big batch of that soup too, or chili.  The peppers freeze really well, I froze tons of jalapeños last year, they held up really well.  Great for chili and soups all year until next harvest.

I dread the season that is coming, all we can do is dream, plan, and live vicariously through all the folks who can grow all winter long!