Last spring I got a gallon baggie full of worms and some of their compost. I put them in a plastic storage container I had and made a sleeve for it from a paper grocery bag to keep things dark. The guy I got them from keeps them in kiddy pools under his house and he told me that I need to watch the moisture level, too dry or too wet will kill them, and he said that the most common problem he sees with people who get worms from him is that they forget about them. I haven't forgotten them, but I worry that I'm not doing the best I can for them, so I thought I'd ask some questions of those who are raising worms and see what advice you guys had.

I tear newspaper in strips and wet it with a mister, then put it in the container. When I initially set it up I put wet paper strips over top of the stuff that was in the baggie and I checked it every week or so. The top dried out and got kind of hard so I dribbled some water in there, but I think I drizzled too much, so I switched to using a mister so I could control things a bit more. I give them apples and fruit trimmings and shredded newspaper that's dampened. I should probably give them more of the compost, I just don't want to put too much stuff in there and end up with rotting going on.

How often do you check on your worms?

How do you judge whether their environment is too dry, too damp, too much food, not enough food?

Where do you keep your worms? Here's a picture of the container mine are in right now. I only got a few when I started, so it'll take them a while to outgrow this container (I think). I didn't crop the spray bottle out of the picture so that there was something for size comparison. 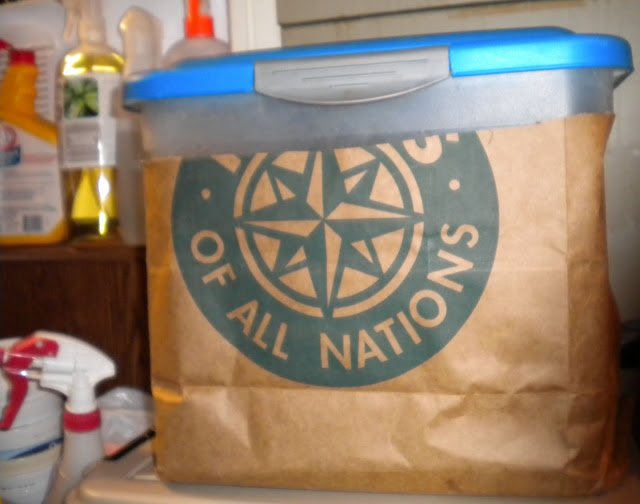 How do you harvest your compost? I know there was a post where someone shared that information, but I can't find it so I thought I'd ask in a thread that was specifically about worm keeping. If I find that thread I'll post the thread in this one too.

Josh posted about Worm Tubes and my 10-year-old son wants to put some of those in our beds this year, which I think is a great idea!

Here are some great threads about worms:

A great post by quiltbea about attracting garden worms

I found the post about harvesting worm compost! Thank you, quiltbea