May Avatar: Not Just Veggies! (click this)
Welcome to the Official SFG Forum
!!! Happy Gardening in 2020 !!!
Search
Latest topics
» TD - A Journey Through Prostate Cancer
by donnainzone5 Today at 2:20 pm

The book I have is the second one. Very good and is very particular about what each type of sprout needs. I would advise against soaking overnight,though. I've killed seeds that way, and the Brauenstein book differentiates how much of a soak each seed needs. Out of the dozens of types of seeds he covers, the soaking time is generally somewhere between 3 and 8 hours.

sanderson, each seed needs different numbers of wettings per day. Generally, 3 to 5 is about right, but again, it varies by seed.

Out of the several types of sprouters I've used, I like this one best, but it is being sold at a premium now:

The "updated" version is this, which looks like the same thing pretty much:

This is one of the flat tray types I tried, but as much as I wanted to, I didn't really like it because the roots went down through its holes and then the sprouts had to be cut or ripped out, shredding them up a bit:

This is typical of a pre-made sprouting jar:

You can see that it isn't so different from what you could do with a spare jar of your own.

As far as seeds, I had good results from Todd's Seeds through Amazon. I also get good seeds from my local farmers market store, including some raw mung beans I just tried out that all sprouted well.

This is the updated version of the lettuce spinner I have:

Excellent for helping remove hulls from the sprouted seeds. That's especially important with mung bean sprouts, as the hulls have chemicals in them that we don't want in any quantity in our bodies. It's a bit of a fussy job, I won't lie. Sometimes the hulls help by rising to the top or sinking to the bottom, and you can pour or strain a lot off quickly that way. But there will always be plenty that give you an argument. A lettuce spinner helps a lot, but you may be spending a few minutes per tray occasionally.

I've been sprouting for...oh lessee...decades actually...and I've always soaked the seeds overnight.  I rinse only twice a day, morning and night, treating all the seeds the same way.  They all do their own thing in their own time.  I have never read a book on how to do it properly or what tools to use.  With my li'l pea brain, a book might complicate things.

I should also add that normally my jars are set up tilted in the dish drainer or dishwasher, where ever there's room, to make sure all the water drips out.  But this time of year it's so dry in here that I just drain then lay the jars on their sides to retain a bit of moisture.

As for growing sprout seeds, the closest I've come so far was to plant some sprouted broccoli seeds.  They never flowered, hence no seeds.  But the leaves were delicious.

I also want to recommend The Sprout House for seeds, through Amazon. That's where I got most of my seeds.

Re how many times to wet a seed, the main thing is to not let them completely dry out. If you water some seeds more times per day, though, you'll get faster growth, speeding up your turn-around time till you can plant your next crop.

One of the weaknesses of sprouting is that unless you have multiple containers going at once, you'll have down times when you're just growing sprouts, not eating them. No big deal if you don't eat many, or there's only one sprout-eater in the house. But you may grow to really love fresh sprouts, and in that case, you'll always want to be growing them quickly and to have fresh batches coming in every few days.

Marc, thank you for all the information! 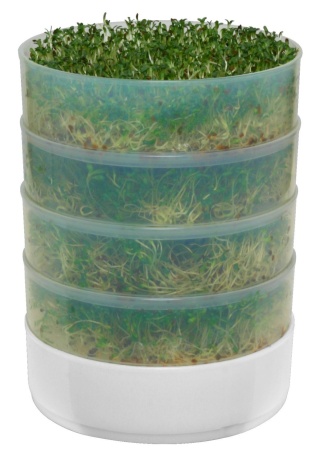 I haven't read starting from the first page so sorry if this has been asked already but by using the sprout trays from above can we start the sprouts on separate days so to have sprouts growing in different stages for our chickens?

Of course you can, Rose. That's why you have several trays.
Start them one day apart, two days or as many days  as you want. As you empty one tray, refill it it at once and keep the sprouts coming.

Only thing is, I'd keep mung bean sprouts on the bottom, as they leach a lot of green into the liquid that drains from tray to tray, and being that their hulls have mild toxins in them, I wouldn't want those toxins soaking into any trays beneath. In fact I grow mung beans each in their own separate home-made tray these days.