May Avatar: Not Just Veggies! (click this)
Welcome to the Official SFG Forum
!!! Happy Gardening in 2020 !!!
Search
Latest topics
» California - What are you doing this month?
by Yardslave Today at 2:33 pm

I'm starting to clean up my first square foot garden for the fall - and oh my goodness. I'm having a terrible time pulling up the dead corn stalks - they are ROOTED deep in the ground! Has anyone ever run into this before... and found a solution?

Corn stalks root from the bottom, then add anchor roots higher on the stem to keep them upright in wind. I'm wondering if you cut the anchor roots away from the stalk if that would make it easier to pull them?

HI and welcome to the forum.

If you let your Mel's Mix dry out a bit, they'll practically fall out. Lots of us have to support our stalks near maturity so they don't fall over because the MM is so friable. 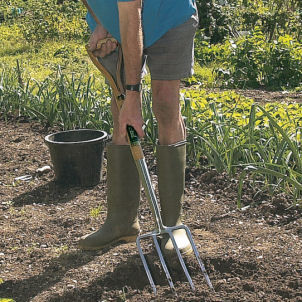 I had a problem with mine too! I grew a normal long season corn (Silver Queen) It grows long root system! The roots hook in from the top of the soil after the corn is on. It has a good taste and would work great in a high wind area.

I tried to just pull, no go.

I let the soil dry and even a shovel wouldn't work.

I fineally soaked the soil til really wet, then I could pull. after I got them pulled, I laid on top of the soil, to dry, so I could shake off the MM.

I had a hard time too. They never left the 6" of soil, but they were entangled with each other. Once the first one came the rest gave up the ghost. I let them dry (stalks) and they seemed easier to pull after that.

Thanks for all the advice, everyone - most appreciated.

In case it's useful to other folks... the strain I planted was Mirai, and it does seem to have a sturdy root system! The stalks are dry right now, and the soil is pretty dry as well, but they were still holding firm. I've found that cutting those top roots did help considerably, and I've gotten half of them out of the ground so far.

I'm curious about whether they'd come out of wet dirt more easily; I'm thinking about leaving a couple intact until it rains later this week, just to find out...

Thanks again for the tips.

Ha, yes my corn stalks were pretty cemented in also. It was funny because i was so afraid of them blowing over in the wind, but in actuality, I don't think a bulldozer would've moved those things. Fortunately I'm a procrastinator, so they were pretty dried out by the time I yanked them, and the soil was wet, but almost the entire square of MM would come up too. Then I laid them across the box and let them dry out, and I cut them into pieces - yes, with scissors (the clippers are somewhere around, but who knows where). And now I'll cover the cut up stalks and I THINK they should compost back into the soil over the winter. I'm actually not going to plant corn again next year because I didn't get enough bang for the buck with those.