Welcome to the South Plains!!!

Welcome to the South Plains!!!

Folks in west Texas and eastern New Mexico call ourselves on the south plains, but honestly we're on the Llano Estacado, also known as the "Palisaded Plains." The Llano Estacado stretches from down here in southeast New Mexico all the way up into extreme southwestern Kansas. The elevation starts around 3000 feet in the southeast and eases up to just over 5000 feet up on the northwest end. It averages out to 10 feet per mile so it looks flat unless you're running along the edge of the plateau where the escarpment can be up to 300 feet high. If you look at the relief map, you can see the flat plains that stretch from Big Spring Texas up into Oklahoma and Kansas. The only break to the north is the Canadian River which some folks say is the edge, but the wind and the cold keeps running north until it hits the high plains up in Kansas. 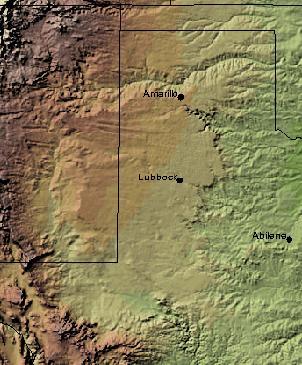 Our yearly seasons include cold and windy, hot and windy, Monsoon month...which will invariably be right around the time of the county fair....and then a cool and not so windy few months around the holidays. When I mention rain it's usually less than 23 inches, but we tend to get most of it all at once during the monsoons. We get a large temperature swing during the year... low 20's up into the low 100's so
folks will tell you we average around 65....haha gotta look at the guage quick!
Well if any of you are in our fair, windswept region come on in and say hello, introduce yourselves....and let me know if you've found that first set of lawn furniture I bought when I got out here in 2003! HA!

Am I in the right region for Wichita, KS? It says its South-Central KS but I cant quite figure out where I fit in these regional groups.

I don't know, but welcome to the forum and join in anywhere you see an interesting topic.

Someone could make some good money with found lawn furniture out your way it sounds like!