What kind of bug makes holes in basil? And what do I do? I would really like to stay away from chemicals. 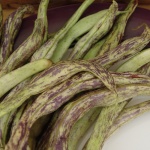 I'm sure there is several I suggest pictures. I have had trouble with earwigs. they can eat the whole leaf, just holes, but usually make the leaf look like lace.

I will borrow my daughters camera tommorow.

How do you get rid of earwigs, without nasty chemicals? I too have holes/lace in my basil.

tegaan wrote:How do you get rid of earwigs, without nasty chemicals? I too have holes/lace in my basil.

I was venting about this very thing :o) check here someone gave a great detailed way to get rid of them I'm excited to try! https://squarefoot.forumotion.com/t8084-venting-goes-here-what-went-wrong-thread

Ok, I made a trap, we will see how it goes. If it works I will make more.

My basil is happy as can be, but my bell peppers have little round holes. There are no bugs or larva visible, just holes.

Mamachibi, little round holes could be caused by flea beetles, which are very small and quick, so they can be hard to spot. Can you post a picture of the damage?

I am using Organocide or insecticidal soap. Organocide is OMRI listed and made from edible fish oil, sesame and soy oils. It has no expiration
date (a forever shelf life). Insecticidal soap I make myself from Dr. Bronner's liquid soaps.

Organocide says its a fungicide as well, last night I sprayed for blight am hoping it will work

We will see. At least keep it at bay.
Ive used insecticidal soaps on my basils before, I spray anything at night after bees go home. I do know organocide says it will not kill beneficial insects on their site, but I prefer to spray after they bees go home just in case.
Ha-v-v

I have used this recipe for the last couple years, the thing is I cant remember if the fish oil or soap spray did it

but I do use both on my plants.
Insecticidal soap - http://www.care2.com/greenliving/homemade-insecticidal-soap.html

P.S. when using organocide I can harvest right after spraying and eat

I tried the earwig traps, they didn't work that well. So my daughter and I were out in the garden and she spotted earwigs between the SF box and the stand it is on, both made of wood. So I had an idea, I grabbed my what I now call "bug spray", water, oil and soap. I also grabbed the hose. We went on a bug hunt. I sprayed the space with the bugs and seconds later they all poured out, ick ick ick, horror movie stuff. Then I sprayed them all with my bug spray within 5-15 seconds they were DEAD! We did this to all the spaces and got hundreds of earwigs, big ones, little ones and some white ones. I have been doing this for a few days and there are less and less of them......satisfaction!!! Now if I could just figure out how to keep the little black flies off my tomatoes.

Similar topics
» How do I get rid of chinch bugs on my tomatoes?????
» Good Bugs vs Bad Bugs
» Things I find in my compost
» Cool idea - The Garden stick
» Hi from Brisbane, Australia