» .?? Sfg to conventional bearing vegetables
by sanderson Today at 1:32 pm

» Happy Birthday!!
by AtlantaMarie Today at 8:01 am

» Hello From Wilmington NC zone 8a
by sanderson Yesterday at 5:43 pm

Its me again, another bug question...

I don't have a photo of this guy yet, he is quite too fast moving for my cell phone cam, but he looks like a spotted cucumber beetle, only bright red instead of green.

Here is a photo of a spotted cucumber beetle:

It looks just like that, size and all, but bright red instead of green. Have seen no evidence of damage, and have found them crawling over all manner of plants in the garden. Ive tried ye olde google, but thus far, cannot find anything.

I am going to call the extension office later today, but was wondering if anyone here might have a clue what it is and if I need to be concerned about it... 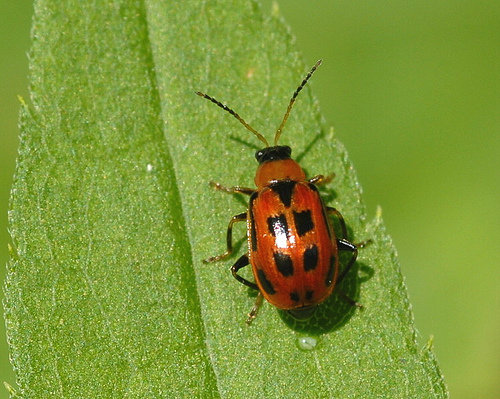 "Description: Adult bean leaf beetles come in several colors, from yellow-green to red, and their markings can vary as well. Regardless, all bean leaf beetles have a characteristic black triangle mark at the front of the elytra, just behind the pronotum. Generally only the adult beetles will be visible, as all other forms live in the soil. The eggs are oval and orange-red in color. Larvae are white with black ends. The pupae are ghostly white copies of the adults.

Life cycle: Adult bean leaf beetles overwinter in leaf litter or in the soil, usually preferring wooded areas for shelter. As soon as temperatures begin to warm up in the spring, the first adults emerge to feed and mate. Females lay about a dozen eggs at a time in the soil under legume hosts. After several weeks of feeding on the roots, larvae pupate in the soil. Adults emerge to repeat the cycle. In southern areas, bean leaf beetles can produce multiple generations within a growing season.

Crops damaged: Snap beans, soybeans, and other legumes. Adults feed on both the foliage and pods, while larvae feed on the roots.

Signs and symptoms: Round holes in foliage, within the leaf margins. Stunted plant growth due to larvae feeding on roots. Cosmetic damage to pods late in season.

Great info. I'm hardly ever out in the afternoons as I work nights and sleep in the afternons. Now I will go out and check on my beanie babies.

Thanks for the help! But... turns out, it is a lady beetle.. a spotted lady beetle. After you posted the info on bean leaf beetles (which I do have some munching my beans, but those guys are a brown color...grrr), I went out, hunted em down in the garden, and looked for the triangles... nope, and they looked like they were feasting on aphids.. so 2 hours of googling later, I find this-

Yay! Finally something to feast on the aphids!

Tril - Thanks for your helpful post and photo above! I just stumbled upon this thread, ran outside with cup of soapy water to check, and lo & behold - found a bean leaf beetle! I only had a few holes on a three of my seedlings, and only saw the one beetle (may he RIP), but I'm sure he probably has some family members lurking around. Now that I know what to look for, I'll stay on top of it! Can't say enough about the great help folks offer on this forum!