I live in MA and am just building my very 1st square foot garden and am very excited! Can anyone suggest plants vs seeds for anything that grows well in this area. We're thinking about tomatoes, peppers, cucumburs, lettuce, radishes, cilantro, oregano, basil, broccoli, spinach, sugar snap peas and any other vegetables that grow really well in our area! I'm curious if it's too late to grow seeds, etc. thanks for your help!

Welcome to the SFG forum from a recent newbie.

Why not go to the garden centre (sorry, center) and buy a few lettuce and anything that takes your fancy and plant them and see what happens?

In addition, plant things like radish which will give you a quick and encouraging return. (I know, kids' stuff). That is the first seed I plant each spring.

Please don't try and do everything at once but enjoy what you are doing. Many gardeners here have years of experience and when you comeup with something you are trying, if needed they will jump in and try to put you right. Even the short time I have been here I have learned several new things.

from Kelejan (Lady Kelejan in case you think I am a he. lol)

I would plant the cucumburs, lettuce, radishes, cilantro, oregano, basil, broccoli, spinach, sugar snap peas from seeds and peppers and toms from plants to save time. Next year if you wanted you could start your own peppers and toms inside or in a cold frame from seeds.

Hi Icorm! I am down in NH near Vermont, where are you located? if you read this thread May 1st in New England there is some info about what you can plant now.

I'm in Maine but our zones are pretty similar.

Right now you can put cool-weather seedlings in the ground and since you couldn't start them yourself, buy them from a nursery or Home Depot or Lowe's nearby. You can shop for broccoli, brussels sprouts, cabbage, Chinese cabbage and cauliflower and get those planted now. They can take the cool weather, but not freezing.
If you want some herbs, seedlings can go in now for thyme, rosemary, parsley. I'd wait on the basil. It can be needy for warmth. Some of the herbs are invasive so be careful on putting them in your raised beds. You can always plant them in pots but keep them outside.
Sow seeds in your beds for sugar peas, turnip, carrots, lettuces, greens, spinach, radishes, Swiss chard, and parsnips.

The warm-weather plants don't go in til the last frost date and even a couple weeks later but again, you'll have to buy them.
When you do, you'll need to harden them off unless they were living outdoors when you bought them.
To harden off, just bring the plants outdoors, in a shady spot at first, out of the wind, for an hr or two the first day. Each day increase the time spent outdoors, adding sunshine hours to the mix but bringing them indoors at nite. At the end of the time allotted, leave them outside overnite. Some folks take up to 2 weeks to harden off. I take a week, but I also make sure I cover my newly-planted seedlings with cheesecloth for a couple of days so they don't get sunburned. 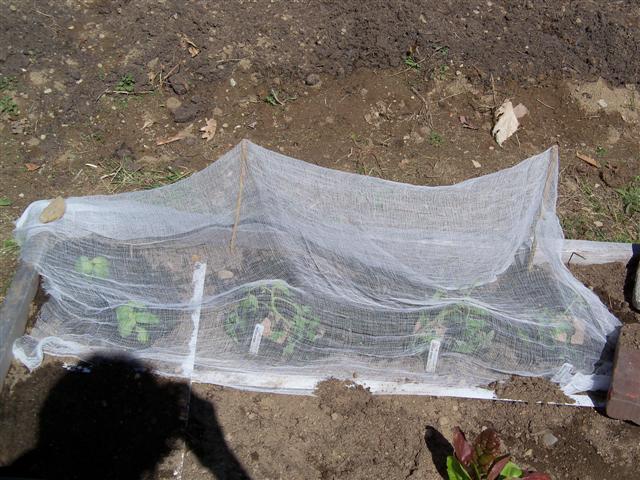 I just take a couple of wire clothes hangers and shape them into an arc, and with a couple of spring-clip clothes pins, I pin some cheesecloth over the new seedlings.
Those would be tomatoes, peppers and eggplant. Tomatoes are a bit hardier so I'd plant them around the last frost date. Hold off on the peppers and the eggplant another week or two. They like it warmer, especially the eggplant.
You can sow cucumber seeds a week or two after the last frost date as well as melons and squashes. Read the seed packets. They don't like having their roots disturbed so using seedlings won't gain much. Seeds sown will catch up to any seedlings that you plant too early. Cold just slows down the growth on plants

Have a great time with your garden. I started 3 years ago and I get more involved each year. Its exciting and the food is so tasty, I couldn't believe the difference from store-bought veggies. I now eat veggies I would never eat before now, like broccoli, cabbage, spinach, and squash.

Thank you all for your feedback. I bought a lot of plants and seeds over the weekend and plan on planting some of them this week (the seeds & plants that are not sensitive). Thank you!!!

It is wonderful watching them grow, such magic!