October Avatar: Fall Gardening!! (click this)
Welcome to the Official SFG Forum
!!! Happy Gardening in 2021 !!!
Search
Latest topics
» What Have You Picked From Your Garden Today
by markqz Today at 7:57 pm

My Swiss Chard is growing like a weed! In an effort to try and use as much as possible, I have searched all over for recipes. Here is one of the most interesting I found. Not sure if it is a side dish or desert but we had it for breakfast and it was a hit. One note............I could not find puff pastry at my local grocery store so I used crescent roll dough.


A specialty from Nice, in the south of France,
this dessert surprises anyone outside of Provence or Italy (where they make a
similar sweet), because few people think of putting greens in a
tart.

I love how easy Swiss Chard is to grow! And it's so pretty! (I have the "Bright Lights" variety) It wasn't fazed by the freeze/ice we had in Feb with just a tarp covering it. And although it does a fainting act in the heat of the day whenever it gets over 90 or so, it bounces right back, even when we hit 103.

My only trouble has been getting brave enough to eat it, lol. I used some in a soup earlier this year, then left it alone for a couple more months. 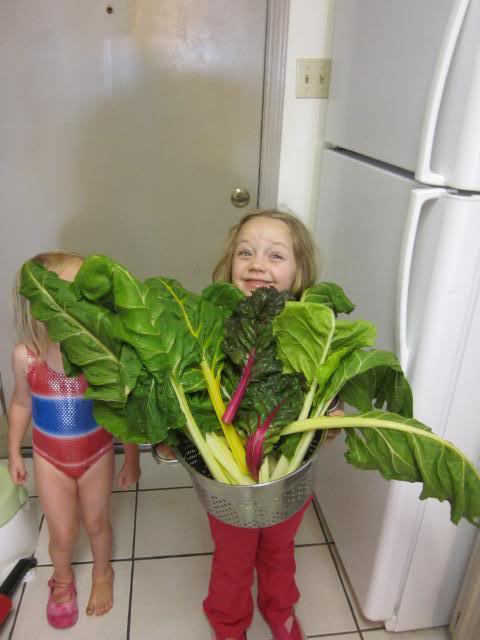 Here's what I harvested in one day, still leaving quite a bit, from one square. I have 5 plants in that square and they are crowded, but I staggered the planting, so one is getting big as another gets cut and they don't seem to mind it a bit. I did that because I wanted a variety of colors.

I also found a recipe for just the stems in How to Cook Everything that I thought was pretty good and the kids ate (with the promise of dessert, but without gagging).

There are a ton of recipes out there for "Kale Chips." You can do the same thing with Chard. It was pretty good, but the kids weren't fans, so I probably won't make that again.

My current square has been going since Sep/Oct or so. I'm going to plant a fresh square as soon as I can get around to it because I'm not sure what it'll do long term.

That is the cutest picture.

Your swiss chard is beautiful. I think you should just put in a vase and make it an arrangement if you don't like to eat it

Just chop up the chard.
Heat 1 Tablespoon each of butter and olive oil in a pan.
Add one (or more if you like) clove of garlic and 1/4 cup of onion to the oil mixture and cook until the onion is translucent.
Add the chard to the pan and saute until it has wilted down.
Add salt and pepper to taste (sometimes I even use 1/4 teaspoon of chicken bouillon powder instead of salt)

THAT is some BEAUTIFUL CHARD!!! Congrats!!, I usually slice it into 1 inch ribbons (including the stems) and lightly steam it all then I serve it with Newman's Own family recipe italian dressing. If I have lots and lots, I will slice into ribbons, blanch, drain and freeze a few cups into freezer bags. I am still eating kale from the freezer.