» Using misters
by OhioGardener Yesterday at 7:32 am

Probably not too many of us will ever grow pineapple in a SFG (I certainly won't!) but I've been wanting to try this recipe for quite a while now. 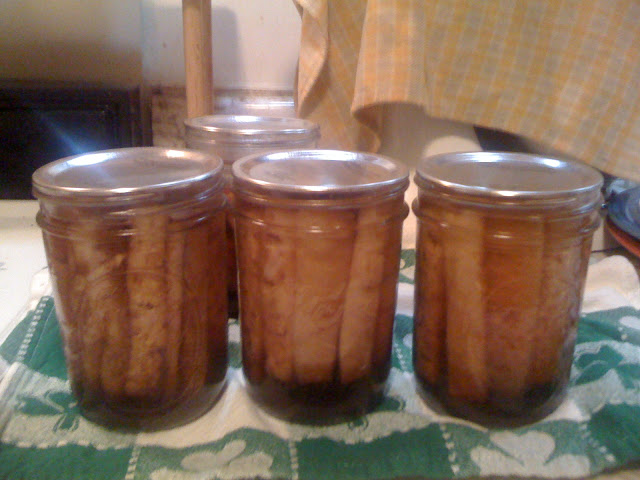 The 4th jar in the back is only partway full and I will use it soon. What happened is, the recipe called for 2 pineapples and a cup of unsweetened pineapple juice. I didn't have the juice, as I thought I'd get enough from cutting up the fruit. Not true! So I had to sacrifice some of the fruit to make juice.

It smelled AMAZING while it was cooking up...can't wait to try some! We are going to have a ham soon and that's what I'm aiming for... but from licking my fingers, I think this stuff would be absolutely wonderful over vanilla ice cream, too.

2 fresh pineapples, peeled, cored, and cut into spears (about 5 pounds each) (note: I tried to measure the pineapple against the jar, which left me with equal numbers of spears just about perfectly sized, and short ones.)

Add pineapple to syrup, simmer until hot through. Remove the fruit from the syrup and keep warm. Bring syrup just to a boil and remove spice bag.

I like pineapple now and then but don't buy the fresh any longer. I can't eat it alone fast enuf.

Let us know how it tastes.

I'm with you on that one, quiltbea. I love fresh pineapple, but I can't eat it fast enough either. Can't wait to pop open that first jar!

Can you believe you've been canning for less than a year? It's addictive, isn't it?

Actually, I can completely believe I've been canning for less than a year.

That was another reason I wanted to make this batch...sort of "stay in practice" as it were!

Those pings really are music to my ears, though!

My homemade canning rack of bands has rusted a bit. I don't know whether to hit it with CLR (and then worry about chemicals from that! I think not!), just scrub it really well, or make another one. This time around I just rinsed it off really well and used it as-is.