» Johnson Su composting Bioreactor instructions for home, not the farm.
by has55 Today at 10:57 am

» homemade vermicomposting/Worm Casting Compost Sifters
by has55 Today at 10:45 am

» Soaking Seeds for Better Germination
by Simso Today at 9:34 am

» Famous Gardening Quotes
by OhioGardener Today at 8:29 am

Can plants be topped?

Can plants be topped?

I fast approaching "critical mass" on some of my plantings (my cuke vine hit 6' height yesterday) & I'm running out of vertical height on the trellis.

Being an old Bonsai/Topiary guy ...my first instinct is to "top" it & my assumption is that it won't hurt the plant, just make it bush out and/or redirect resources to producing fruit/veggies.

Does that work on "food plants"? Or should I just do a Macgyver and come up with a way to extend the trellis height?

Not sure about topping the cukes. I have cut off side branches on my squash without a problem, though.

Any reason why you can't just bring the cuke back down the trellis on the other side? Or even on the same side (though that will take some convincing.) I learned this year that you can guide a squash vine that way (needs some tying).

Plants about a foot taller than it was in that picture & I've already run eight tendrils all the way up (X-frame trellis concentric to a barrel trellis....one up each support & one up each crossmeber face)

So your saying to train it over and start it back down the trellis/stake?

I'm not used to working with stuff this "fragile" ..... can you bend it back on itself without it snapping, or is there a trick to it like there is for other plants (1/3 radius, let plant dehydrate, string tension, etc)

Thanks for thee input guys.

Think I'm going to start with a bottom trim and clear all the growth/buds from the first 12-14" from the bottom. I've got 30-40 more blooms/buds than the plant can handle, clustered at the base of the plant & a lot of foliage down low that is undoubtedly sapping resources from the developing fruit thats higher up.

I'll probably wait a week, make sure everything heals up & there is no ill effects & then top it off at the 6'0 mark.

I was good with my daily training/trellis duties & have really sturdy/well-supported growth in the 2' to 5' portion of the plant, so hopefully I can re-focus all the plants resources to that area.

Besides I really don't want to be picking cukes from a ladder.

Not helping with today's problem, but this year I had one large arch with a twine trellis. I want to do several more next year. I'm writing from a different computer so I can't post my photo, but the feet of the arch were in boxes, but the cukes and little pumpkins grew up and over.

Sure wouldn't work with tomatoes, though.

That is a pretty cuke plant Acara. Don't see many around here that big without some kind of fungus by that height.


An Arch---------after my own heart.
Been dreaming a veggie Arch for over a year now. One of these days!

If you do nothing, it will flop over on its own and just start down. I've never had one break on its own. My 21 peas have done the same thing -- they wave in the breeze about 1 foot or so above the trellis, then just give up and start back down. Except the one that reached WAY over and snagged a hanging basket on an adjacent garden and is now climbing the basket hanger. I decided to let it go so see how far it would travel.

I forced my squash to do a 180 turn and head back down the trellis. I was afraid I would break it... it did need a certain turn radius to do it. I used nylon stocking footies (your ties look much more professional.

Edit: Here are some pictures of the turn I engineered. I have to laugh as I post these, as the plant looks SO SMALL!!! They are from the end of June. 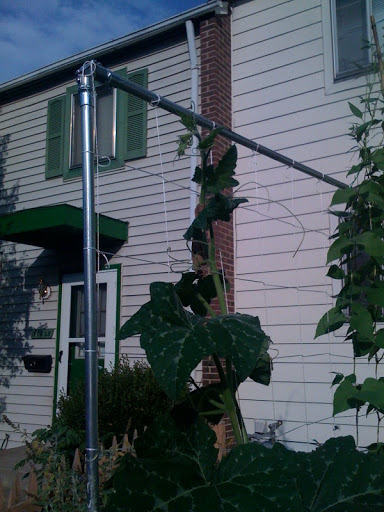 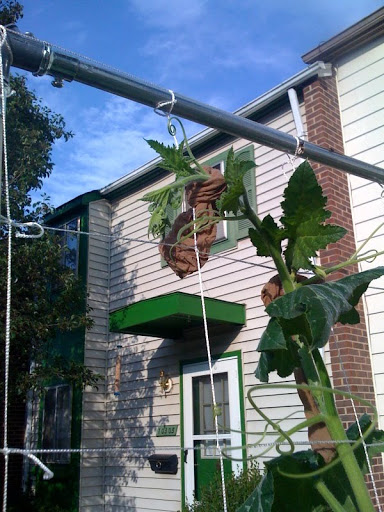 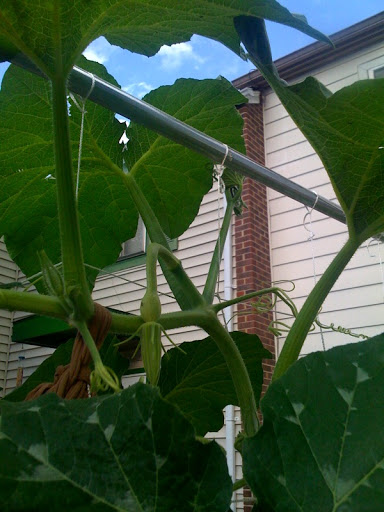 Here, it's headed back down, but it still wants up. Eventually, it got the idea and I removed all of those ties as the tendrils latched onto the trellis. There was a lot of tension on the nylons for a while, though... I kept it tight as I dared. 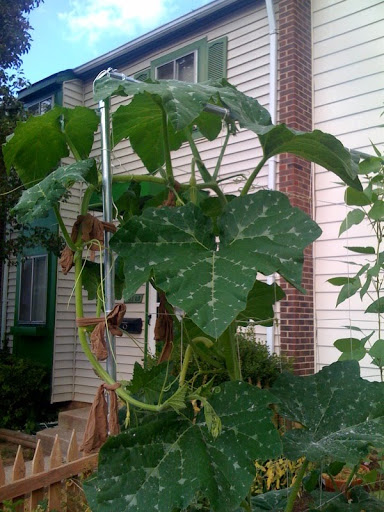 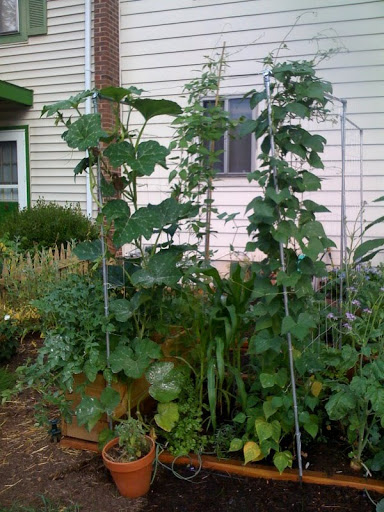 It later turned into this.... this pic is from early Sept. It is actually bigger now, if you can believe it! 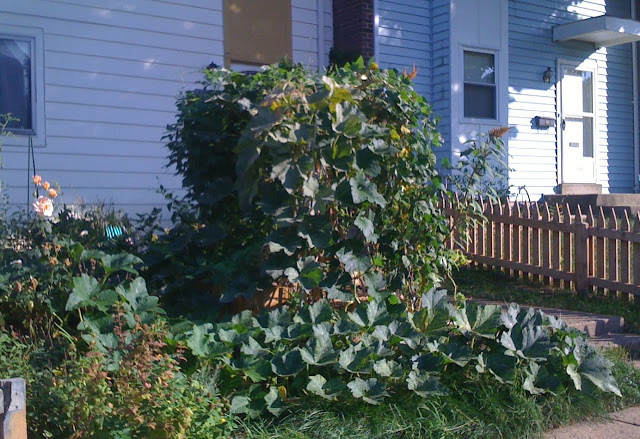 The lesson I learned from this was that rampicante completely laughs at any trellis you care to throw at it, and I needn't have bothered trying to train it, unless I had been a LOT more attentive about pruning, had devoted the entire trellis to it (rather than sharing with the limas) and done a series of S-turns up and down across the full width of the trellis. This particular plant is extremely sneaky, though, and sends branches out at the drop of a hat. Also, I would NOT grow it next to a mature tree, because you will be picking squash 30 feet up.

Cukes, on the other hand... I think would benefit from either letting them come back down the trellis, or training them back down if you feel that is needed. Gravity will eventually take over when the weight of the fruit comes into play.

Thanks ..those pictures help alot.

I gave "stanley" a pedicure(cleared the first 18" of all leaves/flowers) two days ago, and I thought he threw a temper-tantrum, because he dropped another 20 flowers yesterday.

Came home today & "Stanley" was over the 7' mark, had replaced 12 of the 50 buds I removed, and a dozen of the cukes had doubled in size ..... I gotta do something or I'm going to have to pick cukes from my roof.

Good news is the SFG cukes appear to be getting jealous of all the attention I've been giving Stanley & have started their own growth spurts.

Official 'lessons learned' for next season .... 1 cuke plant is enough

Welcome on the photos.

Just how many cukes did you plant? I grew two this year, but the EVIL cuke bugs got them early.

Welcome on the photos.

Just how many cukes did you plant? I grew two this year, but the EVIL cuke bugs got them early.

Megan wrote:Just how many cukes did you plant?

Oh, wow. Hope you know how to make pickles (or intend to learn!)

Speaking of which, I need to make more zuke pickles this weekend....