Garlic jam is officially AWESOME! (That plus the following was our breakfast...though we only made it through one sausage.) 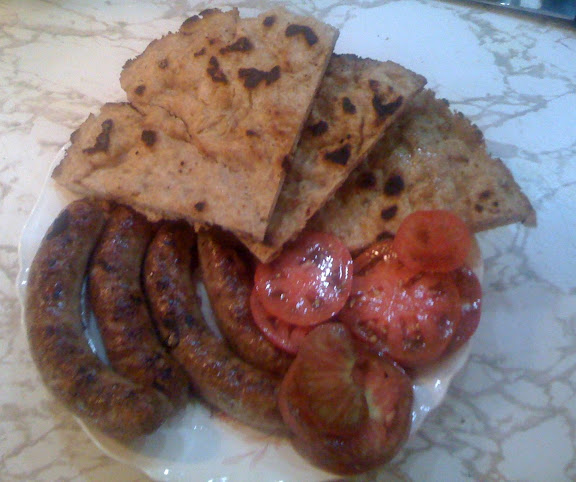 Thanks! I have made yeast-raised flatbreads before; this one just used baking powder and was done in 15 minutes. Gotta love it.

I would love it if you'd share the bread recipe!

I first saw it on a Jacques Pepin show. I eventually found the recipe here: http://www.lafujimama.com/2009/06/tibetan-flatbread-perfect-soup-dunking/ Enjoy!

I just whipped up a batch and it's cooking now

I fear my pan is too small and the lid doesn't completely seal, but I'll let you know how it goes!

Let me know how it goes! Mine did burn a little on the bottom (I was afraid of upsetting the rise by jiggling the pan) but it was still really good.

The bread was simple and delicious, and I can see where adding herbs or different kinds of flour could make it even better! Thank you for the recipe

That all looks so delicious. I love flat bread and grilled tomatoes are to die for!
What is the link to the garlic jam recipe? Please, pretty please?

Actually, those were just sliced tomatoes...

The garlic jam recipe is from the Blue Ball book this year. I didn't find it on their website (sorry, Ball!). Please do look at their website, though, as they have many great ideas including a cranberry mustard I want to try: http://www.freshpreserving.com/

Roast garlic under a broiler or on a grill at 425 for 10-15 mins. Cool, peel garlic. Puree the garlic with 1/2 cup vinegar in a food processor or blender. Combine this, the remaining vinegar, and sugar in a large saucepot (I read that as saucepan. No! Use a big stockpot!! My large saucepan boiled over!), stirring until sugar dissolves. Bring to a boil, stirring constantly. Stir in liquid pectin. Bring back to a rolling boil. Boil hard 1 minute, stirring constantly. Remove from heat, and skim foam if necessary. Ladle hot jelly into hot jars, leaving 1/4" headspace. Adjust caps, process 10 minutes in boiling water canner.

Megan & those who like to make their own bread...

Seeing pix of your rustic breads, Megan, reminds me of Artisan Bread. Are you familiar with the method in these two books? http://www.artisanbreadinfive.com/

I am sold on it! The basics...Mix the dough (no kneading) and keep in the fridge until ready to bake.

I've tried a variety of no-knead recipes. I've seen that one -- looks really good! -- but haven't tried it yet.

We are not huge bread eaters so I don't know if keeping a big container of dough around would work well for us, though I love the concept. My favorite bread of all time is challah; I've been making it for almost 10 years now, mostly for holidays and/or as gifts. I recently found a rustic black bread recipe that may displace the challah as my favorite, though I've only made it once so far.

!. Does it nmatter what variety of garlic?

I've never made it before now, so I just used whatever kind of garlic, and the standard white vinegar. If you get better results with something else, please let us know!

I tried the bread for dinner tonight. The first pan-full almost set off the smoke alarm. I tried again and it worked much better. I turned the temperature way down. To me the bread was a little bland, is it supposed to be that way?

I've made the bread three times -- first time it was charred black. The next time it was soggy around the edges, with about a 6" circle in the very center OK. The last time I finally got it right, with only one soggy edge. My stove is an electric flat top, and I'm still learning how to use it. I had to turn the heat to low so as not to burn the bread. I use iron skillets, so in theory it shouldn't have burned so badly. And, yes, I also found it quite bland -- I think it's supposed to be a dunking bread.

It is just a quick-bread, so yes, it doesn't have a lot of the savor that yeast and gluten development would bring. I thought it was fine, but then, I put garlic jam all over it!

I think it's good for when the choice is lazy bread vs. no bread.

I have a gas stove, heavy frypan and use a heat-diffuser as well... and cooked it on medium heat. It did get a little charred on the bottom but I thought it was okay. I might try it in the cast iron skillet next time, but I think I would let the skillet heat up a bit first.

Belfry, you might be aided by a heat diffuser. With a flat top I would not use an actual heat diffuser unless there is one made for flat tops (which I've never heard of?) but you could set one pan inside another to help spread the heat out. Also, be careful using iron skillets on a flat top unless you know they are made for it. A cast iron skillet can scratch a flat top. (If it has a coating on it like Le Creuset, it is probably okay.)

If you want great flavor, there is always challah. It takes some time, but worth the effort. This is one of mine.... I learned how to bake yeast breads with this beastie. It is a little weather-sensitive but I have never had one fail on me. 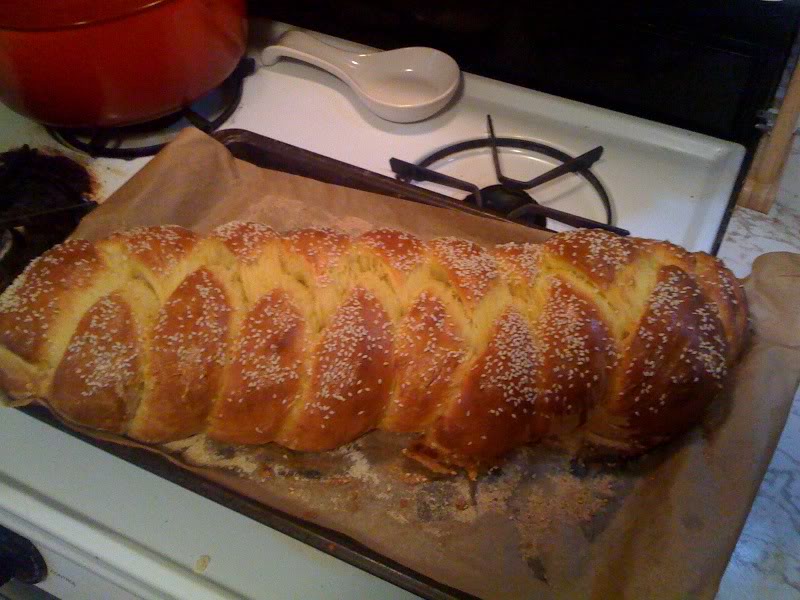 Here is another bread which I recently found, have only made it once but I am totally addicted. It's a black bread and easier than the challah but has 17

ingredients. (The hardest part is just measuring everything.) It cracked a little more than I wanted it to, but oh yum! Love the caraway and fennel. (Which is weird for me because I normally hate fennel!) 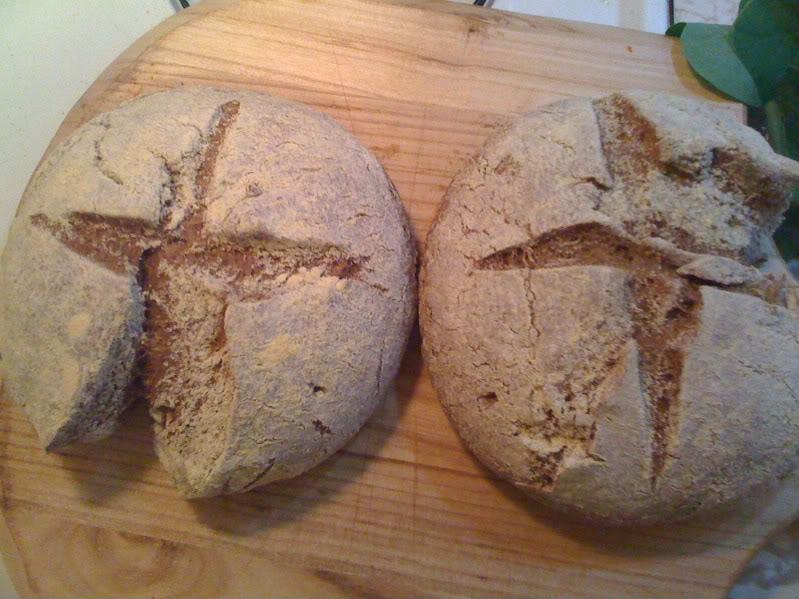 OMG this sounds great. I will try this is a couple of weeks when our rainy weather starts in. Think pork roast, saurkraut (sp?) potatoes, green beans and black bread.
I had plenty of light bread recipes, but really needed this one.
Thanks so much!

Welcome! It is a really nice hearty bread. It eats more like a quickbread (close grain, not real chewy) but the flavor is great. It would make fantastic toast, mine didn't last that long.

Megan I put this link in the recipe section. I have to try it some time!!! Yum!

Thanks... let me know how it works out!

I am sure it is not "traditional" black bread, because the traditional stuff is surely peasant food and would not have a lot of ingredients. But, it's yum.