October Avatar: Fall Gardening!! (click this)
Welcome to the Official SFG Forum
!!! Happy Gardening in 2021 !!!
Search
Latest topics
» What are you eating from your garden today?
by OhioGardener Yesterday at 6:05 pm

It's September already! It doesn't seem like it could be possible, as hot as it has been here this week! Today it was 96 degrees here in the mountains of WV, but looking ahead into next week I see cooler temps are on the way. Despite the heat during the daytime, the night temps have been getting cooler. I don't mind the cooler temperatures, but I always feel a little sad because I know that soon the fresh produce will come to an end for the year. I do "put up" tomatoes for the winter, but you know it just not the same as eating one ripened by the sun!

Have you done any Fall planting in your SFG? Are you still harvesting produce from your boxes? Are you canning or freezing your produce? Take a few minutes and let me know what you are up to this September in your SFG. I have a busy week and weekend coming, so please feel free to start without me. :-) I'll take some new photos and will post my garden's status later.

Here in Southeast Missouri it is finally beginning to cool off. We need rain though, and once again they are missing us.

My turnips, radishes, winter radishes, and beets are up. The slowpoke carrots are taking their sweet time. We plan to plant mustard greens, kale, lettuces, fennel, arugula, and spinach this weekend. I may try a little swiss chard even though it's supposedly too late. If we have a late fall it might make it through a light frost or two.

Our late plantings of beans are flowering and beginning to set pods. We have bush limas, dragon's tongue shell beans, improved horticulture shell beans, and bush Blue Lake snap beans. Our late planting of corn is now growing ears and silking but the tassels already gave up their pollen and the ears are not filling out. Something triggered early tasseling, apparently. We had another heat wave and it must have hit at the critical time. So, again no corn.

We are still picking tomatoes, jalapenoes, basil, and parsley from the SFG boxes. We are getting okra which is growing in a bed, and the sweet potato vines are still growing in a nearby bed.

That's our fall report from SEMO.

Well- my tomatoes are dying off- due to lack of water. the swiss chard loves the heat, the potatoes need to be dung up along with the onions. The strawberries look great as do the hot peppers.

I was thinking about putting some stuff for a fall harvest, but the lack of rain and the recent water bill forced that thought out of my mind. My goal now is to prepare at least 2 rain barrels this winter to use next year, that way I can offset the water bill.

My next plan- moving the gardens into the yard by another 6 feet so I can get the holes dung for the 4 dwarf apples trees that I would like to put in for next year.

Hermine left us nearly six inches of rain - yay! We needed every drop of it.

We delayed planting our lettuce and greens beds until it rained, so we accomplished that this week.

Hubby had planted bunching onions a couple of months ago but they never came up in spite of frequent watering of the bed. So I planted turnips, beets, radishes, and carrots in that bed. After our six-inch rain, we now have little sprigs of onions popping up all over that bed among the root crops. (Why didn't they sprout when we watered with the hose? Were they holding back because of the heat?)

Our Blue Lakes, Improved Horticulture, and Dragon's Tongue beans are setting pods, but something is eating the flowers and pods from the bush limas as soon as they start to set pods. What insect singles out bush limas from those other beans? I suppose I'll have to call our limas a trap crop and be thankful whatever it is hasn't moved to the others. The same thing happened with our Scarlet Runner beans this summer.

As I said in a separate post, the voles are attacking our sweet potatoes. I hope they leave us a few.

Here it is September 15th already and I haven't continued my September garden update yet! Here's view of the whole SFG on September 3. 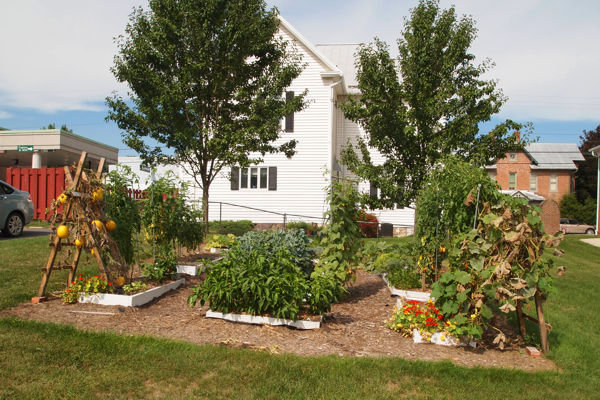 I have added some pictures from September 3 to my forum gallery page, take a look when you get the chance.

Tomatoes are still coming on! I have almost a half bushel of the Opalka paste tomatoes picked and waiting to be canned into sauce, salsa and some canned just plain. I made 6 quarts of pasta sauce/marinara to put up in the freezer last week. I started with Mrs. Wages seasoning packet, but doctored it up with extra herbs. We've eaten three already! Two jars went for a family get together and one was left at home for the hubby to eat. I made it as a basic pasta sauce, but to serve it I added sauteed zucchini, peppers and onions as well as some browned ground beef. Much better than Ragu any day! 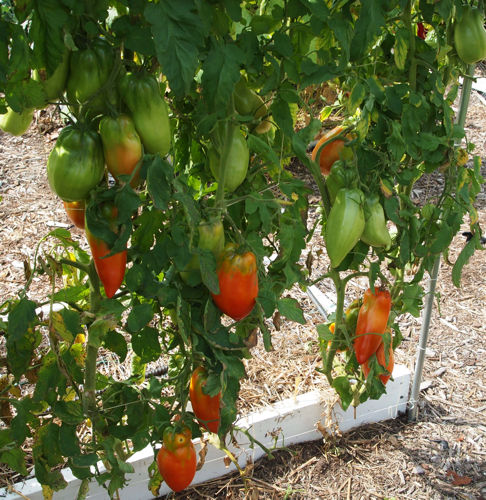 WV '63 are slowing down and our sole Sweet 100 cherry tomato plant looks like a small tree. I'll be roasting some more of those!

Zucchini is still bearing, but we've pulled up the yellow squash. Bonbon winter squash is about ready to pick and we've picked ten of the spaghetti squash so far. Powdery mildew killed all the leaves on the spaghetti squash, but we sprayed the main stems with neem oil to keep them alive until the squashed ripened. 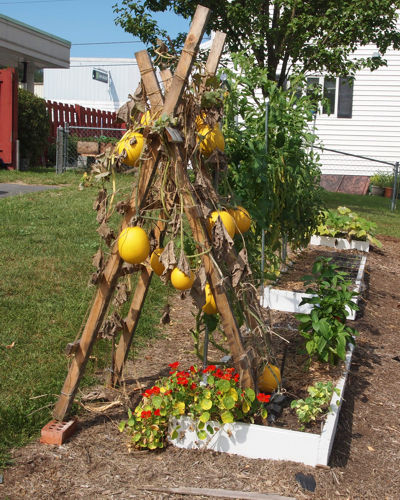 Close up of a very healthy squash! 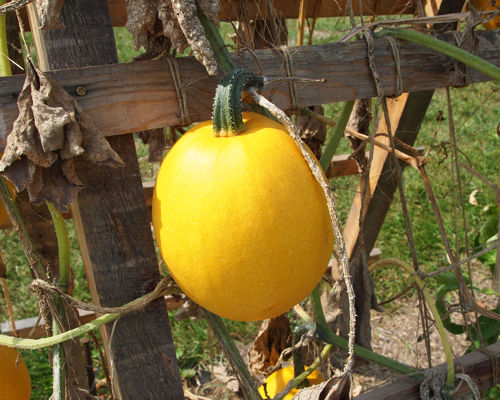 Dragon beans have come and gone. Unlike the filet beans we grew, which keep bearing over a span a a few weeks, the dragon's tongue only give you one picking. Next year I will definitely plant them at intervals to extend the harvest. I parboiled them and then sauteed in olive oil with garlic and shallots. They were sooooo good.

That Packman broccoli is still giving us little shoots of tasty buds -- I can't believe it lasted through the heat of summer! Bell pepper plants are falling over from the weight of the peppers. I've picked and frozen some. Swiss chard keeps growing, but I am glad I only planted two squares! We can't eat it up fast enough. Cucumbers are still bearing too. I'll have enough to pickle again now that the weather is a little warmer this week.

For Fall I've planted radishes, baby Pak choi, three different lettuces, arugula and spinach. All looking fine except the flea beetles are eating up the Pak choi. I'm going to plant some more tomorrow. I should still have time, since it's a little hardier, plus I can cover it with a hoop house to extend its season a bit. I also planted a broccolini type (called Apollo). It's looking healthy, but it's not growing very fast. I may have not got it in the garden soon enough. We'll see...

Overall I am happy with the harvest from out SFG this year. Oh yes, and I haven't seen any evil squash vine borer moths flying the last two weeks -- oh ye!

Your photos are beautiful, Patti. I really like your wooden trellises.