February Avatar: Time to Wake Up!!
Welcome to the Official SFG Forum
!!! Happy Gardening in 2022 !!!
Search
Latest topics
» Plant Probiotic (EM-1) that got rid of whitefly
by KiwiSFGnewbie Today at 5:50 pm

I made my first batch of Zucchini Bread 'n' Butter pickles last night. They are my first-ever canned pickles, and the second thing I've ever canned at all (the first being garlic jelly which I made a few days ago.) The recipe is from the latest edition of the Blue Ball book.

It was a bit of a production, but overall MUCH easier than I thought it would be. I'm glad I did the garlic jelly first, as it was a really easy recipe and when it came to doing the pickles I had a better feel for the basic steps involved and how to time everything.

I used my zucchino rampicante squash, which gets just enormous. The recipe called for 14-16 small zucchini. What I actually used was just the neck from a single, large rampicante.... and I got an extra jar on top of the expected yield of 5 pints. The one I used is the larger of these two: 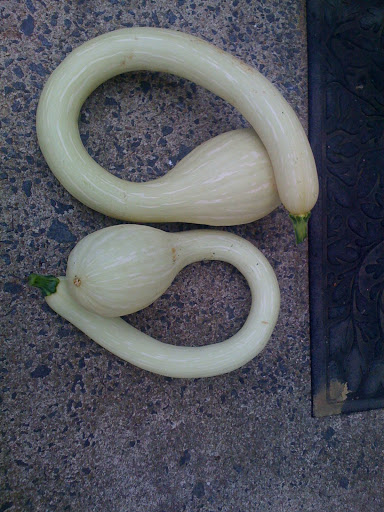 One cool thing about the rampicante is the necks have ZERO seeds. An unexpected downside is that the 1/4" slices I cut were so big (about 2" diameter) that I had to stack them in the center of the pint jars and stuff slices, onions and peppers down the sides however I could, just to get the jars full. Maybe next time I will try some elaborate layering, but I think that will be more difficult than with a smaller diameter cuke or zuke.

I didn't buy a special water-bath canner. For the garlic jelly I used a stockpot and a steamer rack, and since it was just half-pints that was fine. For the pints, I swiped hubby's kettle and made a rack by twisty-ing together a bunch of jar bands: 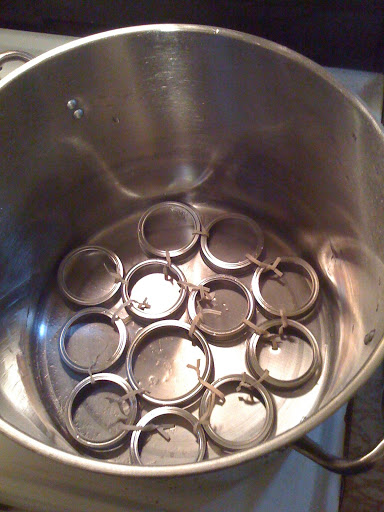 These pickles are pretty -- to me anyway, since I did the work! -- but I've been having trouble photographing them. Anyway, here you go. A canner is me! 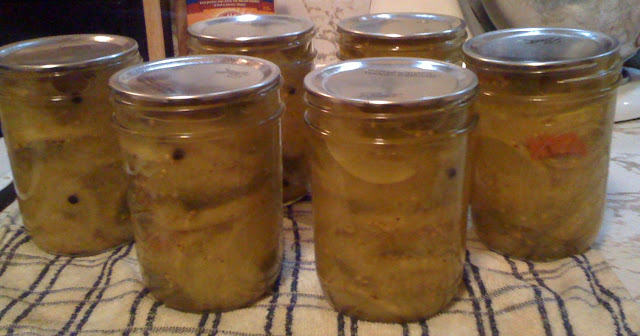 Very exciting! I am liking pickling and finding it lends itself to smallish batches.

Thanks! I am just going by the book. I have been warned not to try to double recipes, etc... if you have more than enough for one batch you need to do them sequentially. So that's what I'm going to do.

Megan, your pickles look great. Brilliant way to make a canning rack, too.

The only reason to spread out and overlap the layers is to make smaller diameter slices fill out the jar better. If you have large diameter slices that wouldn't work, anyway. You were right to fill in the spaces as much as possible.

I've never made zucchini B & B pickles. Let us know how they taste.

Yay! I'm so happy you're canning.

Thanks! I guess I have a month or two to wait before I can try them. Can't wait!

I agree with Ander. What a marvelous idea for a canning rack. Good Job!

Thanks! I can't take credit for the idea, though, I found it somewhere online while I was reading up on canning. Plus a big THANKS to Ander, for reassuring me that the sky would not fall if the jars didn't all go in at the very same moment like you would with a regular rack.

Megan wrote:Thanks! I can't take credit for the idea, though, I found it somewhere online while I was reading up on canning. Plus a big THANKS to Ander, for reassuring me that the sky would not fall if the jars didn't all go in at the very same moment like you would with a regular rack.