February Avatar: Time to Wake Up!!
Welcome to the Official SFG Forum
!!! Happy Gardening in 2022 !!!
Search
Latest topics
» Soaking Seeds for Better Germination
by OhioGardener Today at 7:41 am

I don't know if it was squash bugs or vine borers, but something got my squash. I planted nasturtium, but maybe I didn't plant enough? I'm curious if anyone has had any success with companion planting for squash bugs and vine borers, so I can give it a try next year.

I found an old thread that said catnip wasn't effective.

I've tried companion planting and IMO, it just isn't enough. I had onions, garlic, leeks or shallots surrounding all my curcurbits, had borage everywhere, nasturtiums (although they were doing very poorly in the heat), marigolds scattered all over, basil, rosemary, catnip and other mint trimmings, basically, every companion plant that I've ever read might help and I was doing weekly sprays with some sort of organic insect control, Everything did great until I missed a weekly spray. Then all the squashes got hit to the point where I've pulled the vines and had to throw away 3 spaghetti squashes that actually had borers inside the squash. Cukes and melons are still OK. I never got any tomato worms this year and I did last year.

My regimen is: week 1 - Liquid Seaweed, week 2 - Bt (Bacillis thurigensis), week 3 - Medina Plus, and week 4 - Spinosad. I also use an organic granular feritlizer about once monthly on either week 2 or week 4. I sometimes swap out between the Liquid Seaweed or the Medina Plus or swap the Bt or Spinosad. I think of them in pairs - either foliar feed (that has a little insect control) or straight insect control. I use one from each pair on alternating weeks. If I think the plants need a little boost, I might do a weekday foliar feed and do insect control at the next spray only 1 week from the last insect control.

I really messed up by missing a spray day, though, and paid for it in lost crops for the rest of the summer. My butternuts and spaghetti squash were doing so well, too.

My nieghbor across the street also does raised beds and organic and her squash were wiped out even sooner, since she wasn't spraying like I was. She was occassionally using neem oil, but not often enough apparently.

Apparently we have super borer moths in TX! They are around far longer than what I've read on the web, even from TX A&M web site.

I was told to plant radishes around my melon and squash plants and leave them there. So far, knock on wood, my melon and squashes have little damage because the bugs went to the radishes instead. I also go out daily and pick off any bugs from leaves and check underneath for the tiny clusters of seeds near the veins.
I think the best for me was to cover them with insect barrier until they started to blossom.
Before it became too tedious, I'd uncover, pollinate the blossoms with q-tips, one tip for each plant variety so they didn't cross-pollinate, and then recover. When they got larger, I just removed the covers.
I have back probs so I never was able to bury the covers under the dirt along the rows as instructed to repel ALL the bugs and just hoped a lose covering would help somewhat. It did, so far. 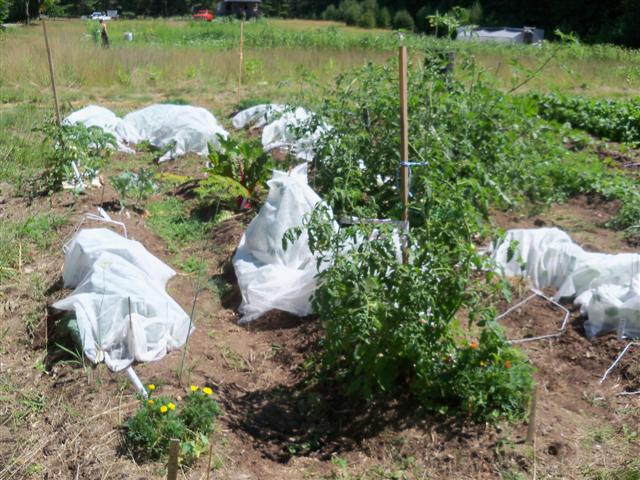 This was taken at my community garden rows where we are not allowed to put in raised beds due to tractor tilling the whole plot and manure spreading with equipt. The white covers are insect barrier fabric.

Just FYI, here's a link to a thread about companion planting in general.

Mine is going great guns. I thought I was completely SVB free until just over the weekend I discovered that SOMETHING had gotten my yellow crookneck. The stem damage looks like classic borer damage, though when I looked in the stem it was full of roly-polys. The poor plant was struggling to bloom -- it hadn't been doing well, I think too much shade -- but very recently it put out a burst of growth and blossoms, I think that must have been when the bugs attacked it and it was trying to reproduce before it died. I was sad to pull it, but I've got way more squash on hand than I need with the rampicante.

I did companion plant... I have onions EVERYWHERE, catnip, radishes (though those are all gone now). I did spray with Neem, but not early, nor, it seems, enough.

What little I have read suggests that nasturtiums' value as a companion plant is that they attract aphids. (So what do I have planted between my two tomato plants?? Doh!) I could certainly be wrong but I don't think they can help squash. They ARE very tasty, though!

I think squash bugs are particularly trying, if all of my googling is accurate. The rampicante had some on it, but we removed them as quick as we could and it seems to have worked. I went out tonight to take pictures of the cucumbers and saw two little teeny squash that weren't there this morning!

There are two of them growing, but I don't think they're quite big enough to pick.

Odd Duck wrote:I've tried companion planting and IMO, it just isn't enough. I had onions, garlic, leeks or shallots surrounding all my curcurbits, had borage everywhere, nasturtiums (although they were doing very poorly in the heat), marigolds scattered all over, basil, rosemary, catnip and other mint trimmings, basically, every companion plant that I've ever read might help


Ditto, I did all of these PLUS radishes and my squash were wiped out 2x's... The first time I ripped out everything and started over. This second time I thought it would be late enough in the season, but they too were hit hard. I have nursed some back and I am hoping that maybe I might get a fall crop from them.

Just a NOTE I have done all of this companion planting and I still have pest problems... My merigolds/nasturtiums/radishes/basil/rosemary are huge and doing great (over growing their squares) but I still have tons of pests...

I don't think you ever reach a state of 'pest-free' using anything but chemicals, but the problem with chemicals is that you affect a lot more than the pests, such as pollinators, soil quality, and water contamination. I just pulled three big hornworms off my tomatoes yesterday and as gross as that was, I'd rather pull them off and lose a few leaves than put chemicals on the food that I'm going to feed my family. I thought my tomatillos were toast more than once this year because they were ravaged by various bugs, but we got a couple of dozen tomatillos off two plants and I wonder if they didn't make drowning the bugs easier, because they appeared to attract just about everything so I started there when I went on a drowning spree

The only organic control for squash bugs that has worked for me is daily hand picking.

I carry a can of soapy water with me to the garden each day, and check every leaf and stem carefully. I quickly grab any bugs I see and plunk them into the soapy water and drown them. Next I scrape off any eggs I see into the water.

My husband learned that if the plants are watered first, the bugs which are hiding down in the dirt will crawl up the vines on the trellis, making them easier to spot.

I had one butternut vine which wilted due to SVB damage, but after I removed the borer I buried the stem in Mel's Mix and the vine recovered and put out more stems and leaves. No idea if burying it helped or if it was just coincidence.

ander217 wrote:I carry a can of soapy water with me to the garden each day, and check every leaf and stem carefully. I quickly grab any bugs I see and plunk them into the soapy water and drown them. Next I scrape off any eggs I see into the water.

Hm. I am having trouble reaching everything to check every leaf!

I had read that if you cut the borer out of your stem soon enuf, it will heal and the plant keep growing. Mel's Mix was not in the instructions, but I'm sure it helped keep your plant healthy and thriving.

I just discovered SVB for the first time today.

The research I did said that after you find and destroy the larvae in the vine to heap compost (or in our case MM) up around the stem where it was cut and that will help prevent leakage of fluids from the vine and also the plant should grow some more roots, which will help the plant to survive. So you did the right thing. I hope you got them all and I hope I got them all too. I discovered another plant that I think has been attacked but haven't gone out to deal with it yet. The site I read said that the adults are will fly up to a mile to infest other plants. Also said not to plant winter squash there for the next 1 to 2 years. This has discouraged me and I may not plant winter squash again. It says you can also wrap the stems with strips of stockings or aluminum foil to prevent the adults from laying their eggs. I may try that on my other plants. But my question is do you just wrap the bottom of the stem or the whole stem all the way up?

I tried aluminum foil this year around the base of the plant , so far my plants are doing well,I hope. The plants had a couple of dried up leaves at the bottom which I covered with compost ,may help. I also put strips of wood around the plant and in the morning ,where the sting bugs hide , I discard .