TimWardell is taking some time away from the forum, so I'm getting the first of the month update started. Where is your garden at now? What about fall planting?

My garden is a mixed bag - overall incredibly satisfied with my first year sfg though - absolutely thrilled. Oh and the things I have cooked that I didn't ever think of before I had so many veges to use

My limited selection of herbs (thyme, rosemary, basil, parsley, orageno) have been delightful - I will be adding to my herbs next year

this weekend I pulled out my wax beans and bush green beans that didn't recover the deer attack. I replaced with fall seedlings of broccoli and cauliflower - I ran out of squares for the cabbage seedlings. I also planted 2 types of bush green beans, snap peas, beets, spinach, arugula, lettuce, collards and swiss chard this weekend just gone - hopefully I am not too early - I will be diligent with water.

I also have just received a mammoth shipment of seeds - most of which will be more appropriate for next spring - it was a grab bag of ~ packets of seeds, with ~35 or so different varieties - it was a painful effort actually getting the seeds from the distributor, but now they are here, I am very excited. I have posted the ones that I either don't want or are surplus to my requirements on the IHA site - and I have a huge selection to play with next year. I will try carrots and radishes again although my spring crop not anything to talk about - every heard of anyone having trouble growing radishes! lol - I had mostly leaves - and the root was woody - perhaps too much nitrogen? - will try in one of my less leafy gardens. My other leafy veges did really well in that garden.

I am about to built garden number 5 and probably 6 - currently I have 128sqft and want to add another 64 sq ft for next year.

It's been a fabulous summer for us. After years of trying to grow in-ground tomatoes and failing miserably due to soilborne disease, we are awash in wonderful, vine-ripened tomatoes! Our six Romas are about finished and so are a couple of other determinates, but the cherry tomatoes and a few indeterminates are still going strong. Our first Red Brandywine is ripening and I can't wait to taste it!

We've had more sweet banana and rainbow bell peppers than we could count, and those plants will probably continue to bear until the first frost.

Chinese eggplant got off to a lazy start (it was in the bed that sulked for a month) but is now bearing fit to bust! Flea beetles just discovered it last week, so I dusted with diatomaceous earth over the weekend.

Tomatillos are taking over one entire square foot bed! They're late bearers so we've harvested only a few, but the plants are loaded with blossoms and the bees are crazy for them.

Burpless cukes are doing very well -- they seem to have gotten a second wind. We currently have enough of an excess of them that later this week I will probably make B's Chicken with Cucumber (http://www.lpl.arizona.edu/~bcohen/cucumbers/recipes/chicken.html).

The only real disappointment has been the yellow summer squash. It has bloomed like crazy, but only ever set two squash! Guess we should be picking and eating the flowers, eh?

This morning before work I planted indoor-sprouted seeds of broccoli and bok choi. I also noticed that beet seeds are beginning to germinate, so they'll go in next. Carrot seed still hasn't germinated. We bought that from a local feed store where the seed has been sitting in a canister since early spring, so it may or may not still be vital. Time will tell!

It's been a great experiment, and I'd like to grow twice as many tomatoes next summer. I'm saving seed from four of the open-pollinated varieties that have done very well: Mom's (variety unknown, seed came from a friend's mother), Rutgers, a volunteer round, and a volunteer plum. Both the volunteers germinated in my worm bedding, and they've done so well I want to grow them on purpose!

Your garden sounds lovely, would love to see pics !! I understand about squash, not sure why they didnt produce much. I hope someone can shoot some ideas in here. I have had better luck with squash than my row garden. I got one yellow squash in 3 yrs

This year I got three, but quite a few zukes and lots of butternut. 3 acorn squash that wont get to full size it looks like. But I happy with them beings Ive not seen so much harvest until SFG. I went out today to get pics for an Aug update, the batteries died in the cam, ugh. So tomorrow I will try again.
Share pics when you can, it encourages us

So I went to rip out my yellow summer crookneck squash plants on Friday evening, and guess what? They're bearing. Got two baby yellow squash on there! So I will wait a little longer.

We also need to take new photos. Maybe tonight, if the camera batteries are charged.

junequilt wrote:So I went to rip out my yellow summer crookneck squash plants on Friday evening, and guess what? They're bearing. Got two baby yellow squash on there! So I will wait a little longer.

We also need to take new photos. Maybe tonight, if the camera batteries are charged.

My garden is not doing well at present. 100+F temps for the past month has done just about everything in. Most of the tomatoes are dried up, except those planted in the lasagna-style SFG. I've decided not to pull them up right now as the tops are still green and blooming, and there's a chance with cooler weather some might still put on. Okra that is planted in the ground is bearing well -- those planted in Mel's mix are 1/4 the size and not really producing at all. Peppers, cukes and squash are all taking a break, and it looks like most of the squash are dying (normal at this time). Time to plant fall squash, but not sure I can even get it germinated in this weather. Beans are history, but I had a fairly decent harvest. I planted a fall crop and something is chopping them off, so need to replant and put fine screening over them. Thankfully there's still time.

Cool weather plants are just beginning to germinate in the house and if this weather breaks, I'll put them out in late August -- otherwise I will wait until September. 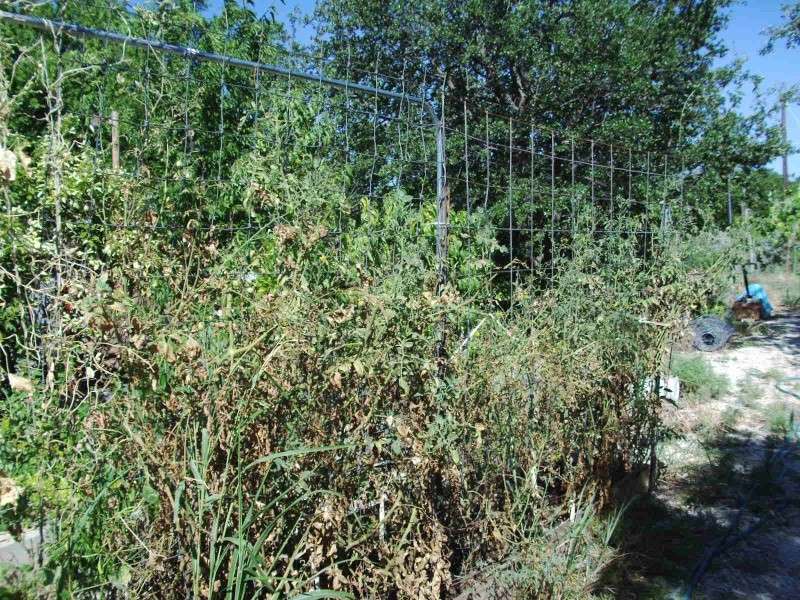 Tomatoes in lasagna SFG (one plant): 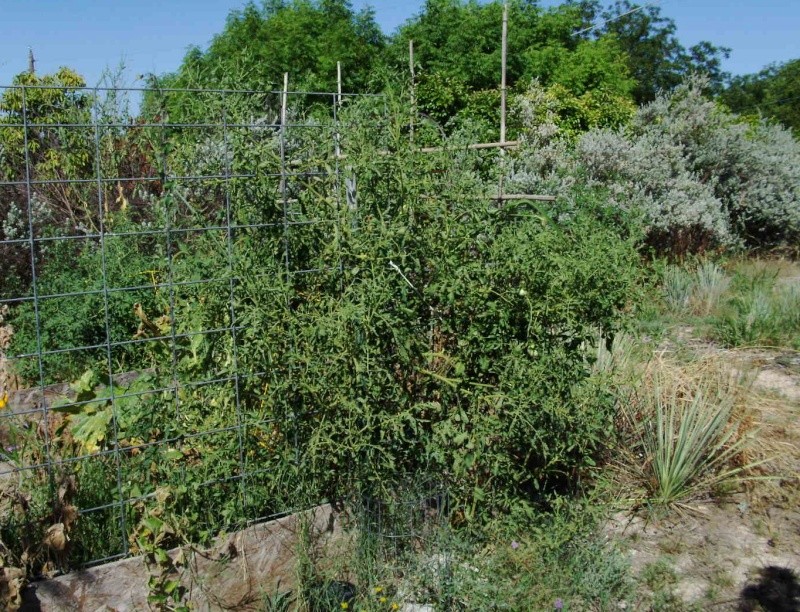 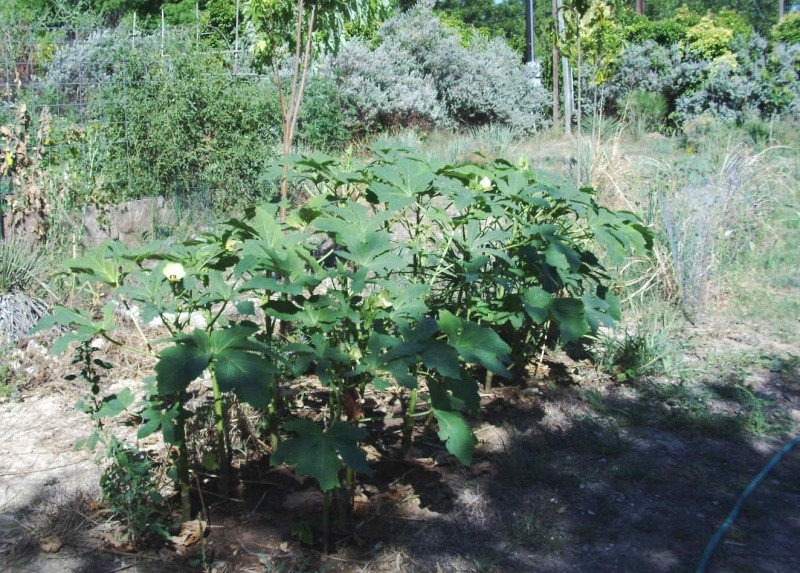 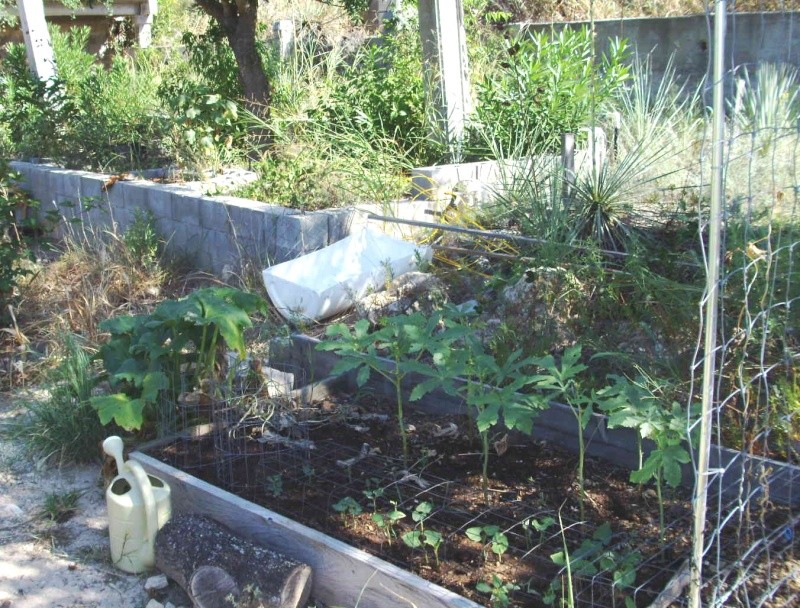 This fall, I'm going to mix in compost and sandy loam into the Mel's Mix beds to try and strengthen the soil for the fall crop.

Well... I'm in the process of changing out the soil in my boxes cause I only learned about MM when I joined this board and read Mel's book. So I decided this would be a good time before planting the fall crop. Besides I have another sort of a whimsical project in mind for the old soil, filling a bed frame that I got from the thrift store and planting just flowers in it. Will post pix when done. Hopefully I can get my boxes done and plant within the next two weeks, wish me luck!

Finally able to post pics of what's going on down here. The corn never really made it

Im ok with this I just know I can grow the smaller corn varieties with 4 to a sq ft. Butternut squash did really well I will grow those again. Zukes did well even while I was fighting the evil "svb"

. Im ready to rip those out now though. I have tomato bushes not plants. Ive let them grow without pruning. I've already started hacking at those, while hacking I take a cutting to make a new plant as well, just in case the hacked plant doesnt survive. Bell peppers are hidden in the bushes, thats one of the big reasons for cutting them out. Plus not a heck of a lot of fruit on them when that bushy. The basils blessed me beyond measure I will do something differently for them next year. More room for sure. I have 3 tiny acorn squash dont think they will get bigger but thats ok too. Just not the size I would get in the grocery store. I have 4 honey dew, I have two to cut open today to see if they are ok, one came off the plant with help, (I dont know who) its my largest, its huge, and one was on the ground and had a spot of yuck. I have to take pics of those and havent.
I am quite happy with my garden this year, Ive done better and had more harvest than any other year of row gardening. (all 3 of them as first time gardener). Yellow cherry tomatoes are still producing I like them a lot.

Im posting the link to the photos this time. Lets see how that works.

for tomatoes!!! I want to be able to walk around the plants and work on them, with the middle being in the box, its very difficult. I will be cutting the existing beds up as they get cleared of stuff.
I am a bit overwhelmed with those plants, who knew I would be overwhelmed from too many plants!!!! Not me:)
Ha-v-v

Oy vey! You better get some steel I beams in there for trellises!

Ha-v-v wrote:....I am now going to say I will never have 4ft wide beds again

Rather than disassembling and re-making your beds, why not make some new ones just for tomatoes? Do you remember that making more beds for your second year is part of the SFG program?

I'm enjoying your success and hoping next year's harvest is twice as big!

Belfry I love your garden !!! We are again the same, we battle the weeds in the walkways. I would love to sit in your garden and sip some sweet tea in the shade of the day!! Its very inviting.
Ha-v-v

Hopefully I can get my boxes done and plant within the next two weeks, wish me luck!

Hope all goes well with your project !! Cant wait to see the end product. I have a friend who took an old bed frame and planted it!! Maybe some frizzy headed lettuce to put in that bed, for the bed head look

Similar topics
» N&C Midwest-it's August...SOUND OFF!~
» Monthly Avatar Theme August 2013: Your Garden in August. Part 2
» Does this sound like you?
» Does this mix amount sound right?
» Watering my SFG