I finally put these into slings today. This squash is supposed to be usable as both summer and winter squash. These are trying SO hard to turn into winter squash, but they are not there yet. And they keep growing! Over 2 feet long now.

I have picked them just a little smaller than this, same coloration, and they are quite tender. No seeds in the neck at all, and just hints of them in the bulb. I caught myself eating a lot of it raw while I was prepping for dinner. 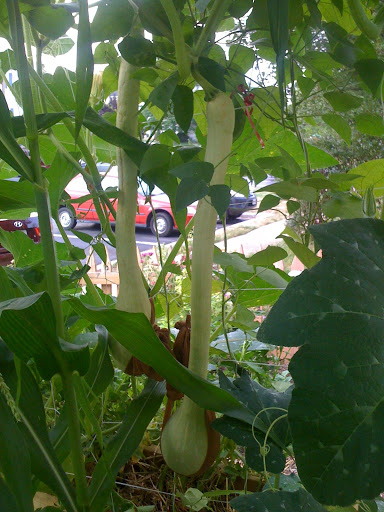 Megan: How awesome!!!! They are beautiful. What kind are they?

trustinhart wrote:Megan: How awesome!!!! They are beautiful. What kind are they?

Thank you! I take no credit... I just stuck it in the ground and it grew. It is zucchino rampicante (C. moschata). One of the vine branches on the ground is producing now, too, and the squash fruit on the ground is curling up like shown on the Baker Seeds website. http://rareseeds.com/cart/products/Zucchino_Rampicante_Squash_Zucca_D_Albenga-1140-16.html

Hi,
I am on my second year of growing the same zucchini that you are. I love them, you do not need to support the fruits. That squash plant will grow huge and it really loves hot weather. I am concerned with my harvest, because my plants have started to produce a month early. I may have to leave bags on neighbors front porches. While I have some squash bugs and powdery mildew problems, that plant still keeps on growing. Enjoy your harvest.

Great news, thank you! I thought the stems seemed strong enough, just didn't want to wake up one morning with a mess on my hands. So glad someone else is enjoying this plant. It's so much fun! And yes... mine is growing like crazy. I have been pinching side branches but some have gotten away from me.

There is a comment on the Baker website about needing to keep them from forming "winter" squash until the fall, lest it stop producing. Have you run into that? I am still seeing other fruit forming. I had some BER but Tums seems to have helped (?)

Patty from Yorktown wrote:Hi,
I am on my second year of growing the same zucchini that you are. I love them, you do not need to support the fruits.

Well, this fruit was in a sling (as is another one.) I went to re-adjust the sling this evening and it slipped. That particular branch was growing crosswise at the top of my 6.5-ft trellis.... and when the fruit slipped, it took the whole vine down with it. I was immediately covered (literally) with a 12 foot squash branch plus a bunch of pole bean vines came down with it. I yelped and was flailing around, trapped by the vines and trying to find my way out without breaking anything. Fortunately my husband was napping, as I'm certain he would have been rolling on the ground laughing at me if he'd seen it.

(He recently started asking me when that plant would start attacking people, you see.)

Finally found my way out and tried to re-hang the vine, but it was dipping dangerously into a deep "V" shape at the point where this fruit was attached. (Maybe the vine would have been stronger if it had been growing with the full weight hanging from it the whole time? I don't know.) So anyway, I clipped it and re-hung the vine. (Then tied a second sling around the second fruit, about the same size as this one, that is hanging from a different branch!)

My not-great scale says this one weighs 5-6 pounds. I don't know if it is really in "winter squash" phase yet? It still has those light stripes. I can mark the skin just a little with my thumbnail. 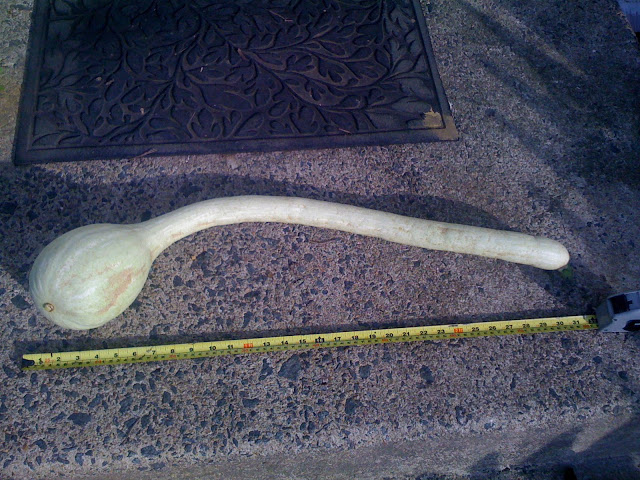 Good luck with your harvest!

Megan wrote: I had some BER but Tums seems to have helped (?)


I know I'm gonna feel dumb when you give me an obvious answer, but what is BER?

I am so jealous! Not much chance of growing that here though.

Is the neck part edible?

Icemaiden wrote:I am so jealous! Not much chance of growing that here though.

Is the neck part edible?

Yes, it is. No seeds in the neck, either!