March 10th I thought I'd begin a running account on this year's experience with the new SFG method. Boxes are finally made and I will complete the grids today if the projected winds allow. I am beginning to make the vertical frames and hope to have them completed by next week.

My boxes are all made of scraps and are not at all pretty, so I am a bit reluctant to post pics. Eventually they will be encased in old bricks so I didn't want to spend anything on the frames.

Lettuce, spinach, turnips, onions, garlic, swiss chard and snap peas are growing in two "lasagna garden" boxes as they needed to go in before I found a source of that elusive vermiculite. Next year they will join the SFG.

With the warmer weather, I couldn't stand it and planted 3 tomatoes and 2 squares each of three different beans yesterday. The former in walls o water -- my first attempt at using them. Today I will get two peppers and one eggplant in the remaining walls o water. With 45+mph winds forecast, this will be a good test of how the walls o water stand up. The beans are grouped so I can cover them easily if we get a late frost.

I'm trying heirloom seeds this year, so will be planting many more varieties of tomatoes and beans than I've ever tried before. 10 different tomatoes and 8 different beans. Which is why this post is titled a "grand experiment".

I know I'm starting with many more squares than Mel recommends. 1 4x6' for asparagus, 3 3 x 7' with an end trellis, and one 2 x 12' for vining plants. Not counting the asparagus, that gives me a total of 87 squares. Yikes!

I'm excited for you BC. I want to follow this one so I'm slipping in an answer.
I'm doing the same thing in the PacNW section.
Gonna have some fun.

I'll be watching and living vicariously through you.

Hehe you use my word. "The Grand Experiment" Thats what I called my garden all last year. The experiment continues at my house too, but not with 87 squares, OH MY! I'm just trying some new veggies this year and also I'm going to experiement with the same types of tomatoes - mels mix vs native soil. Its not that I dont believe in Mel's theory, but New Jersey is FAMOUS for their tomatoes grown right here in our very own sandy soil. My tomatoes last year were almost a complete failure as I looked across the street at the commercial farmer with endless rows of beautiful tomatos! Needles to say I need to try some different things for my own peice of mind.

It is 85 right now, but tomorrow isn't supposed to get above 60. Ah, the joys of spring gardening in Texas!

Thanks all for your kind comments. 87 squares might sound like a lot, but at least 36 will be taken up by summer squash and I need to plant the heirloom bean seeds a few feet from each other so I can keep seed for next year. At this point, my paper plan only shows 6 squares not used so I'll put nasturtiums and marigolds in them. The bottom half of each bed is almost-done compost with about 4" of Mel's mix on top. I made several lasagna beds last fall and have lots of compost from them.

Since I am doing much more in the garden than SFG, I have been working as long as possible each day, hence my absence from the forum until today. Since this is an account of my SFG efforts, I won't bore folks with describing trying to plant 15 to 30 gallon trees in caliche/ clay "soil" by myself. I could have really used a backhoe these past few days.

But today was the day for planting more in the SFG squares: peppers and one eggplant in walls of water and heirloom bean seeds -- just three squares as we might still get a late feeze. Three years ago it warmed up like this -- even the mesquite trees were leafed out and they are the last, and wham! Snow on Easter Day, April 14th. The bluebonnets were lovely covered with snow. 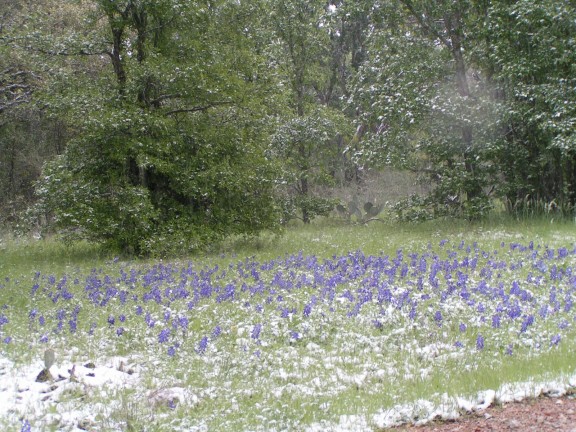 Getting back to SFG -- So far I have planted a second crop of lettuce around where two of the zucchini plants will go, 3 squares of pole beans, 6 of bush beans, four tomatoes in walls o water, two peppers and an eggplant, also in walls o water. Oh, also two squares of turnips and three each of marigolds and nasturtiums. The latter is an experiement as I think it's too hot here to grow well.

And ... the asparagus planted 6 weeks ago is finally sprouting. I had just about given up. I spent some time putting more Mel's mix around the sprouts -- 6 of the 16 I planted are up. Whoopie!!!

When I find my camera, I'll take some photos even though my beds are terrible compared to the beautiful ones so many of you are doing, but eventually they will be surrounded by brick (probably not this year).

March 29th Everything survived the spring freeze of '10. This always happens around here: a couple of weeks of warm weather and than bam! a killing freeze for one or two nights then back up to the '70s or '80's. Part of the challenge of living in this section of Texas. I think the fruit tree blossoms are history -- lost over half of them and others are dropping like flies. But all the veggies and flowers came through fine under the array of protective covers. The tomatoes, peppers and one eggplant in the walls o water fared the best, so I consider those a good investment.

I will be planting more lettuce, beans, and tomatoes today. Also seeding nasturtiums and a mixture of annual flowers (the latter not in the SFG). And will seed squashes in the house in peat pots. Might even try growing some okra in peat pots as I've seen them in the garden centers (not sure they will transplant well--so will only do half that way).

My only "ought" so far with SGF is the beds are cat magnets--much more so than traditional in-ground garden beds. Any square not covered with wire gets dug up. Hopefully once the plants are larger that won't be a problem.

So sorry about your fruit blossoms!

Went to a Veggi class this weekend. Found out that cats WILLNOT dig in gardens that are surrounded by cocoa hulls (left over from making chocolate). They said the smell of the mulch is like an expensive dark chocolate. Someone in the audience did say that mice like them though. I think I'm going to pick up a bag or too.

Deborah ....LOVE what you are doing here!

Good ideas, thank you both. Where do you get cocoa hulls? Although I wonder if my dog might nibble on it -- chocolate is not good for dogs. Anyway, more things to consider.

It's been a while since I posted on this "journal". Have been incredibly busy with both edible and landscape gardening. Plus a few other events that took up my time.

I've planted all the cool weather crops and most are up and thriving. For some reason the turnips are spotty. Must have gotten some bad seed. But mixed lettuces, bright light chard, spinach, edible pod peas, sweet onions, Egyptian onions, and garlic are all thriving.

About 1/3rd the warm weather crops are in. Tomatoes that I had surrounded by Walls o Water are over 1 ft. tall and blooming -- the others are half their size and planted at the same time. Peppers and eggplants are growing nicely. 6 squares of bush beans are happily waving at me along with Kentucy wonder pole beans. I'll plant the other two pole beans today or tomorrow and 1/2 the heirloom tomatoes that are still in pots. Don't want to plants everything this early in case of a late frost.

I couldn't stand it -- I have been given so much compost material (hay w/ calf manure, green clippings, sawdust, more leaves) that I made two more lasagna beds. One 3x8' for squash and Israeli melons and one 4x4' for ornamentals. Will do another ornamental 4x4 either today or tomorrow.

I've decided that since the main distinquishing characteristic of SFG is the grid, that I'm going to start calling my lasagna beds SFGs, since I am planting them using them 1x1' grids. It will be interesting to see how the two different methods fare.

Well, except for eight squares of late beans, my entire garden is planted. Just in time for a cold snap tonight. I'm pushing it on the okra, but since I have a 1/2 oz. of seed I can replant if necessary.

AND it appears the late freeze of a couple of weeks ago did not appreciably damage the fruit trees set. Plum tree is laden, peaches are about half what I would have expected, and fig is full of babies. Not sure about the pear tree, but plenty of blooms survived so I'm hoping for a good harvest. Whew!

April 18 My word, I hadn't realised it's been so long since I posted to my own "journal".

Three days of rain (4 inches!!!) has kept me out of the garden, but everything except the okra is up and growing nicely. Today I'll put up the tomato trellis now that the ground is soft enough to pound in the t-posts. Some of the tomato plants are 2' high and beginning to lean over. Two have baby tomatoes (yeah!).

The next three nights are predicted to be in the high 40's, so I don't expect the okra to germinate. Will replant next week if they are still no-shows.