I've been growing tabasco peppers for a couple of growing seasons, and have long been curious about whether my home grown peppers would make a better tabasco sauce than the commercial product.

So after some research on how McGilhenny & Co. make their famous tabasco sauce, I decided to give it a go. They don't make any secret of how they make their sauce, probably because their exact same process would be pretty difficult for a home gardener to replicate. In short, they do the following:

1) chop up the peppers (seeds and all) into what they call a mash,
2) mix some salt into the peppers,
3) place the salted mash into oak barrels, and let them ferment for 3 years,
4) add some vinegar to the mash,
5) squeeze the juice out of the mash and bottle it up.

There's no way I was going to wait 3 years for my first batch. And the oak barrel... yeah, that's not going to happen, either. So here's what I tried...

Since one of my two tabasco pepper plants was under-producing, I ended up having to add some fully-ripened jalapenos (also out of the garden) to the mix to make a full pint of mash. 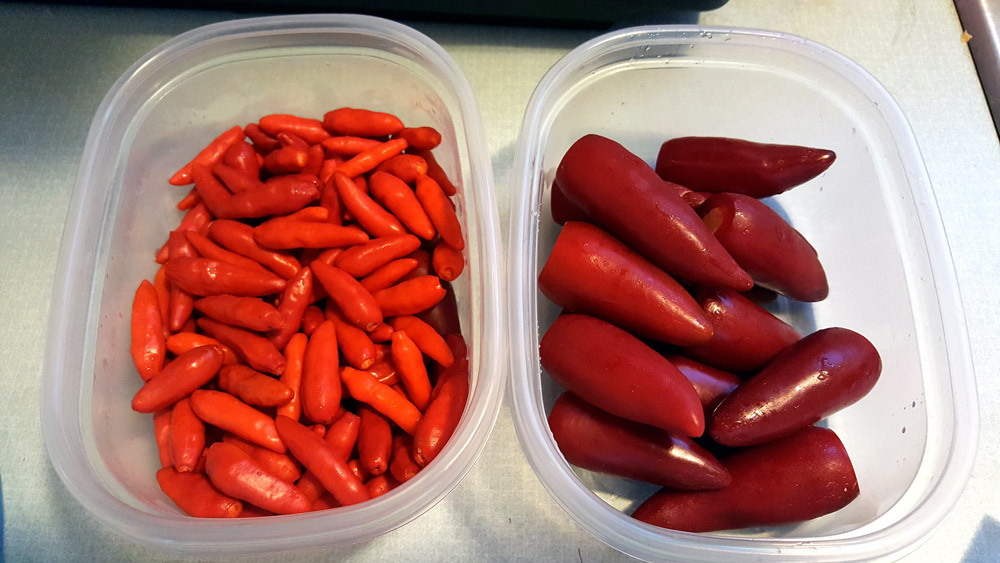 Into the food processor, seeds and all... 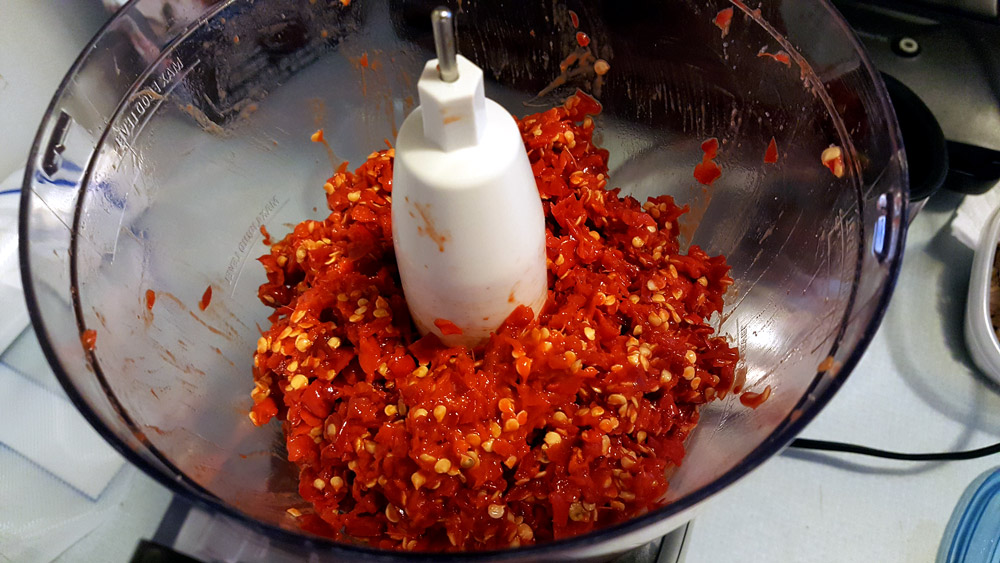 I sprinkled the mash with salt. The amount of salt is 2% by weight, of the weight of the mash. (For a batch this size, not much.) Then the mash went into fermentation for six weeks with some toasted oak chips to infuse some oak flavor. (I got these from my local brewing supply store.) Literally mashed it into the jar to release some juice to make a brine.

Before squeezing the juice out of the mash, I mixed in some vinegar - I think it was a couple teaspoons of it into that pint of mash. 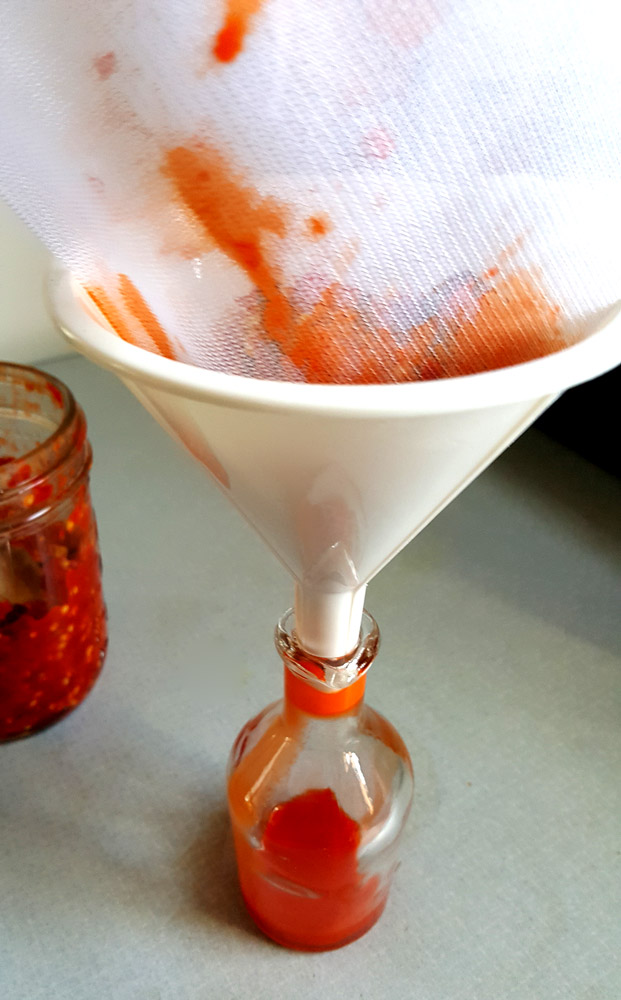 I got about 9oz of pepper sauce from the pint of mash. 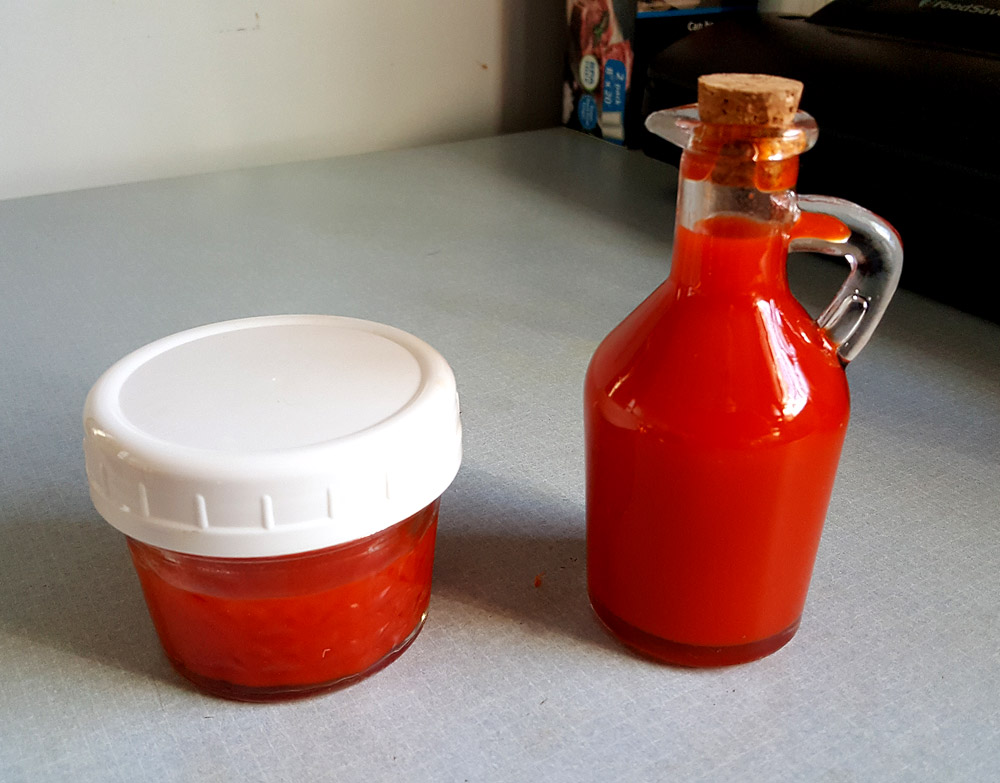 How did it turn out? It was surprisingly good for my first effort. The oak chips are definitely worthwhile, the salt was right, the vinegar was right, but on my next try, 2 changes:

1) Use 100% tabasco peppers. (This means more pepper plants.) Jalapenos are great peppers, but tabascos have their own flavor, and they're just not the same.

Anyone else had a go at this? I'd love to hear your ideas and tips.

Thank you for sharing. I was going to learn how to do this project, but you help out a lot with the recipe.
I'll be using Habanero and Ghost peppers.

@sanderson wrote:Kate, Thank you for sharing.  Where did you get the little fermentation bottle setup?

That is a pint-sized mason jar with a standard plastic lid on which I installed an airlock. I got the airlock and the stopper at a local brewing supply house for around $4. Installing it just involves drilling a smooth hole in the center of the lid that the stopper will fit in tightly.

That lid can also be used on a quart-sized mason jar, and I've also got wide-mouth lids that are fitted with airlocks, that can be used on jars up to a half-gallon.

@has55 wrote:Thank you for sharing. I was going to learn how to do this project, but you help out a lot with the recipe.
I'll be using Habanero and Ghost peppers.

I'm sure you can do this with any kind of pepper you like. Cholula sauce is made with piquin and arbol peppers.

I've been doing this awhile using Serrano chilies.  I haven't done the oak chips but will this year.  I also stabilize the sauce with xanthan gum ~ 1%.

Made mine some six or more years ago , got a reused 20 ounce screw top  glass jar that had been put through dish washer '

Washed nearly 1 & 1/2 pounds of mini ghost chili peppers , then using a plastic blade in the food processor mushed them up after adding two egg cups of table salt .
Almost half filled that jar with  the salted mush & 1/2 a cup of cooled boiled water stirred it in well , sprinkled in 1/4 teaspoon of fresh bread crumbs in a vague attempt to put yeast spore in it

Put food wrap on the jar left it for four days giving it a good shake each day .  After the final shake I put the mush through a fine kitchen strainer sieve to take the seeds out using a wooden spoon to rub the mush through the sieve  , putting 1/2 a cup of cooled boiled water through the sieve to rinse out as much chilli as I could into the glass collecting bowl , rinsed the jar out with a another 1/2 cup of cooled boiled water  again into the collecting bowl , returned the mush to the jar &  added three egg cups of vodka .

Put the screw cap lid on , gave it a good shake with the screw top lid on it


Removed the screw top  , covered the jar in two layers of food wrap film ensuring that there was a deep depression in the top .
Then got two long  bamboo kebab sticks and carefully poked them down to the bottom of th jar through the film  so they didn't tear a big hole . ( sort of replacing the wooden barrel for the evaporating by using the stick … well that was the idea .

Filled the depression in the film with cooking salt , put on a fancy sticky label with the date & what I'd done  and sat the jar on a kitchen shelf as an ornament for three & a half years . The salt had set to a rock hard crust and done its job of wicking any moisture away from the canes by allowing fermentation gasses to escape , slowly  wicking the moisture out the mix & keeping the mix free of any contamination .

By now the water & alcohol had wicked up the canes leaving about an inch & a half of a very thick paste of dark red ........almost brown red matter in the bottom of the jar .  Added another egg cup of vodka to it and used the canes to stir it in to turn the paste back into a pourable liquid .
Decanted the liquid into old Lea Perrins Worcester sauce shaker bottles & started using it for cooking .

Boy was it hot , had to check my underwear to make sure it hadn't burnt any holes in them & that was using just three small shakes of it . It took us a long while to use it up .

If I do it again I will keep the jar/s wrapped in cooking foil or store them in a room temperature dark place , again for the 3 & a bit years fermentation to see if it will keep is bright red colour  .

@nrasmu wrote:I've been doing this awhile using Serrano chilies.  I haven't done the oak chips but will this year.  I also stabilize the sauce with xanthan gum ~ 1%.

Does that keep the sauce from separating? I usually just shake it up before putting it on my food.

@plantoid wrote:Made mine some six or more years ago , got a reused 20 ounce screw top  glass jar that had been put through dish washer '

If I do it again I will keep the jar/s wrapped in cooking foil or store them in a room temperature dark place , again for the 3 & a bit years fermentation to see if it will keep is bright red colour  .

Lotta good info you shared, plantoid... sounds like it turned out great for you. I'll re-read all this before I make my next attempt. Thanks!