It's JUNE. How's your garden doing?
____________________________
I have seen women looking at jewelry ads with a misty eye and one hand resting on the heart, and I only know what they're feeling because that's how I read the seed catalogs in January - Barbara Kingsolver - Animal, Vegetable, Miracle

The vegetables I have in are doing pretty well, some better than I can handle. The claytonia has been like a weed, a lot of it was volunteers rather than me over-planting, and I ended up just ripping most of it out. The square of nine Grazia arugula I put in before winter needed to be cleared to make way for an eggplant. Yesterday, from that one square, I harvested 2 and half salad spinners full

I bagged most of it up and gave it to friends. The mustard greens are rolling in. I timed them right this year, and now I have too much. Mostly minor pest problems: BadBug@pa.gov confirmed allium leaf miner (a new non-native pest), spinach/beet leaf miners, black aphids on the favas, seed maggots got the last succession of spinach, root maggots in the radishes, flea beetles on the brassicas, snails/slugs on the lettuce, and mosquitoes on the me, but fewer cabbage butterfly issues than last year, so far.

The carrots seem stuck, like last year, and the year before that. They germinated, grew a little, and then the tops just stopped growing. I thought it was a watering issue, but that's definitely not the problem this year.

I'm still behind schedule. My attempts to catch up didn't factor in that things still needed to happen sequentially, and the weather hasn't really been cooperating either, so my curcubits are more grown than I wanted for transplanting. I've gotten the first cucumbers in (and then pulled one out two days later, mistaking it for a weed

because it's surrounded by full-grown radishes.)  I got the summer and winter squash in, but something killed one of the delicata already. I got the non-watermelon melons in. I got most of the peppers in. I got most of the ground cherries in. I got the tomatillos in. I got all the eggplants in. I got most of the okra in (there is still a blooming collard in my way!) The tomatoes still need to be hardened off, the poor root-bound basils are waiting on the tomatoes, and I haven't even touched the beans yet. Two of my bean beds are OSFG and I haven't had a chance to mix in more compost on one of them because it's been too wet. I guess beans would probably have rotted if I put them in last week anyhow. I'm hoping my nasturtium seeds don't rot.  I still haven't gotten all my trellises up, and my fence is mostly up, but isn't re-positioned like I want/need.

Here's a photo of the garden taken from the deck. The tomatoes and beans aren't even in yet, much less tall, but it's already hard to see what's going on -- you can still make out the raised beds peeking out. From now until fall my garden will just look like a jumble of various hues of green, with speckles of other colors as plants bloom (at least I hope that's what will happen!) 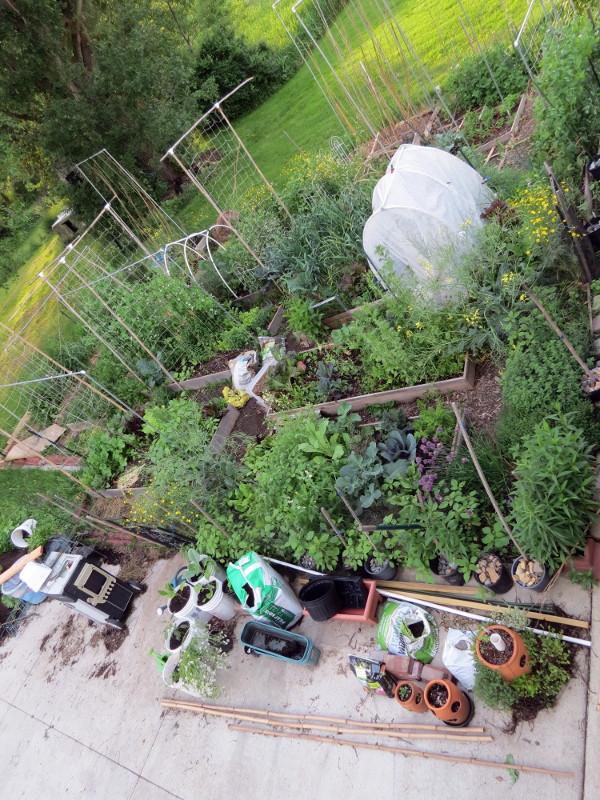 It's so big and full, Beetles! Lovely!

It's so big and full, Beetles!  Lovely!