Been watching this cold front come across the Country for the last week and it's finally arrived. It's now 5:30 Friday morning and currently 32.5 F. But Mother Nature is going to go even lower Friday night into Saturday morning.

Issued by the national weather service last night, Dark blue is a freeze warning while the light blue is a frost watch. 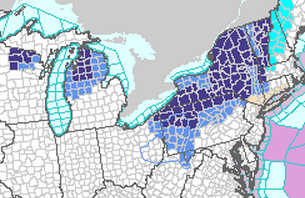 And here's the forecast from the front page of my weather site. 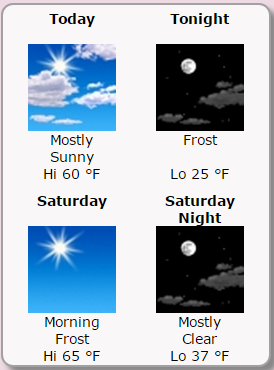 Hopefully it's the end of it for this season.

Doesn't it make you a little jealous at times of those folks who live in a year-round growing environment?

Kelejan wrote:Doesn't it make you a little jealous at times of those folks who live in a year-round growing environment?

There are those times, yeah. I have to admit tho that the worst ones come usually in February when the highs don't get above freezing for days on end.

And, with a little luck, the dag gum gnats that have been giving us problems early this year will take a hit.

I must also admit, MackerelSky, that I also enjoy the anticipation of a new season of gardening, and also enjoy the freedom from having to tend a garden year round.

I just wish the winter was a little shorter, and the spring and fall a little longer. I would only get that if I moved lower down the continent which would mean I would be in the USA.

One great advantage of that would be that the part of my pension that originates in England would not be frozen like it is in Canada.  For those who do not know, if you have an English pension, your pension is frozen at the time you receive it, if you live in Canada, South Africa, Australia or New Zealand, but anywhere else in the world it is indexed to the cost of living.

If I lived one hour's drive south, my pension would now be nearly twice as much as it is here.  This is  the pension that all working people pay into during our working lives.
One does not notice in the first few years but the older you become the less value it has.

Covered everything again Saturday evening and we had a good frost again this Sunday morning.

Saturday Morning we had a low of 25°F from that freeze warning. We went out around 9am to uncover everything and all was good that was covered except the corn. Dark green and bent over. Just tooooo many hours in the mid 20's. Even the asparagus was hit hard.

Oh well, it's still May and time to replant.

I was gone last week and the teen taking care of the house didn't know what to do when the temperature dipped. Luckily it wasn't THAT bad here.
____________________________
I have seen women looking at jewelry ads with a misty eye and one hand resting on the heart, and I only know what they're feeling because that's how I read the seed catalogs in January - Barbara Kingsolver - Animal, Vegetable, Miracle