February Avatar: Time to Wake Up!!
Welcome to the Official SFG Forum
!!! Happy Gardening in 2022 !!!
Search
Latest topics
» What are you eating from your garden today?
by yolos Yesterday at 6:18 pm

» Aero Garden for starting seeds?
by sanderson Yesterday at 5:26 pm

Tim Wardell was visiting a friend in state and found time to come by for a visit. He looks just like his picture, but I'm wondering if he hasn't put on a few pounds since it was taken!

Very little accent, and just as positive and friendly as his posts.

It was the first time anybody who appreciates sfg has seen my boxes. I don't know if I convinced him to try a table top box. He takes his tomato growing seriously! It must be nice to consistently have good tomato growing weather. I offered to ship him some of the excess compost that I have this year, but he declined! We had a great time-I just wish it had been in late July when there would have been a whole lot more to see.

We've had some crummy weather while he's been in state, but this picture proves he did see some sun-for about 30 minutes inbetween rain bursts! 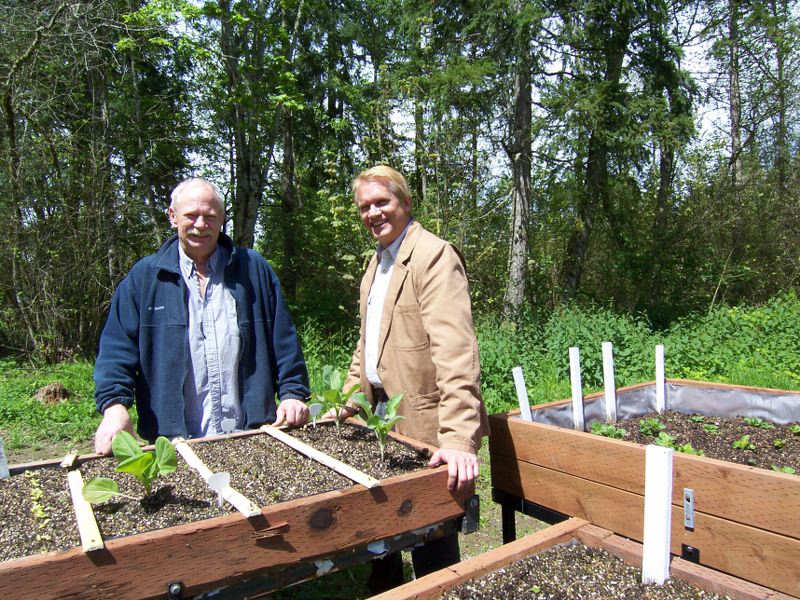 Thanks for sharing with us! You both look great in the photo. I love your raised beds! The weather has been real rainy back here lately, too! That's why husband and I finally realized we better hurry it up and get busy back here on the days when we can, or the season will pass us by!

Okay... so maybe I've added a few pounds, but not being able to go to the gym for three months while recovering from eye surgery to repair a torn retina will do that.

Are you sure it isn't just the layers of clothing required to function in the PNW Tim? There is a reason we put on socks even on sandal days.

We went for an urban hike along the Snohomish River, took one of the dogs and a kayak because my youngest wanted to place a 5-star GEO-cache on a wreck. Today he is looking for decongestant. But it's what we do, we cannot wait for hot weather. 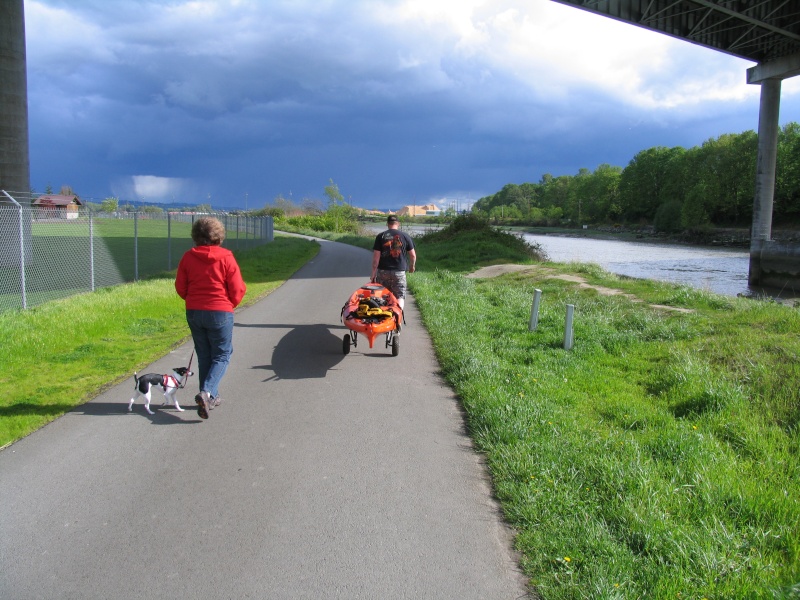 You know you are either getting older or are from out of town when you start dressing for the weather instead of the season in the PNW. Northwest weather is also why we do not understand the charms of a tomato meant to be green when fully ripe.....we think all of them are supposed to be green at harvest.

Deborah.....seriously wishing I could have been there even if just to meet the woman who takes boffers pics!

Lavender Debs wrote: Northwest weather is also why we do not understand the charms of a tomato meant to be green when fully ripe.....we think all of them are supposed to be green at harvest.

You probably don't want to quote yourself, but that is definitely worthy of being your quote of the moment!

I will say there was one disappointing moment when Tim was here. I've come up with another virtue of TT sfg, and Tim didn't want to take a picture for me to demonstrate it. I was going to actually get on the ground on my hands and knees to thin carrots in my cold frame. I was going to enhance the 'plumber's butt' look for the picture. Then, I was going to Photoshop a red circle with a diagonal slash on top of the pic. (TT advantage No. 11: no plumber's butt!)

Alas, Tim wouldn't volunteer to participate in my debauchery!

If I may chime in here; Visiting you Boffer was fun and enlightening. I can see the advantage of table top gardening. I'll have you know that it was after you mentioned the 'plumbers butt' photo that my camera stopped working and it's still broken!
~Karen

Everybody, meet Tim's friend Karen. She hadn't heard of sfg till Tim showed up, so it might take a while to make her a convert. But I've got a secret plan: she's going to come visit again to use some shop tools she doesn't have-so she'll see the veggies progress, and then when she tastes some....(imagine an emoticon of a fish on the end of a fishing line here

Kilroy was a TT SFG'er. 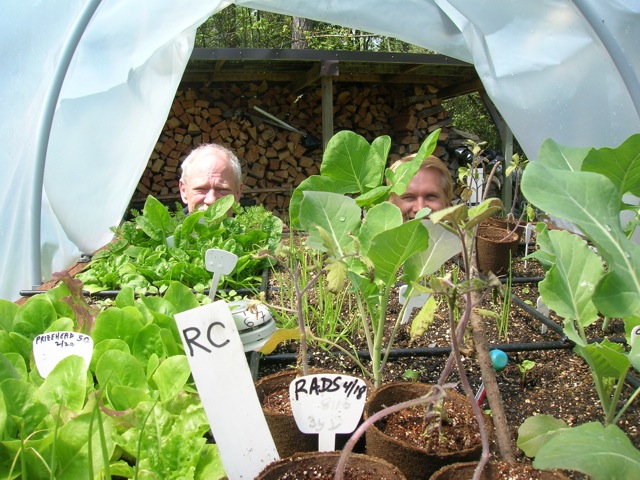 I'll be getting back on the plane in a few hours to head back to Texas. Since visiting boffer I've had a chance to reflect on his obsession with table top SFG's and I think I understand it now. Since he gets so little sunshine living in Washington he has to get his plants as close to the sun as he possibly can - the few days of the year the sun actually shines. If he put his SFG in the ground the veggies would drown and freeze.

Like they say, it's a nice place to visit but I wouldn't want to garden here.

Duly noted: TT advantage No. 12: It gets veggies closer to the sun!

It isn't always that rainy there. I know, I used to live in Oregon! Lately, we've had a lot of rain in NY. I was going to go out and paint the outside of my new boxes, but not sure if it is going to rain or not. Looks kind of iffy.

Thanks NY for defending the Beautiful NW!