» TD - A Journey Through Prostate Cancer
by donnainzone5 Today at 2:20 pm

I was gone for 2 weeks the end of June and early July.  When I left it was definatily spring.  I left plants in WoWs and various partial protections.  Thankfully DH and DS were home to open and close the greenhouse, which they did.  When I got home again summer was definitely here.  I carefully got the WoW off the squash and tomatillos so they could go free and flutter their flowers at the bees.

I will be back in a bit with too many pictures

How is every ones garden doing?   This is our glory season

Some pictures of a garden gone a bit to the jungle.  I attacked the paths with a weedwacker this morning. 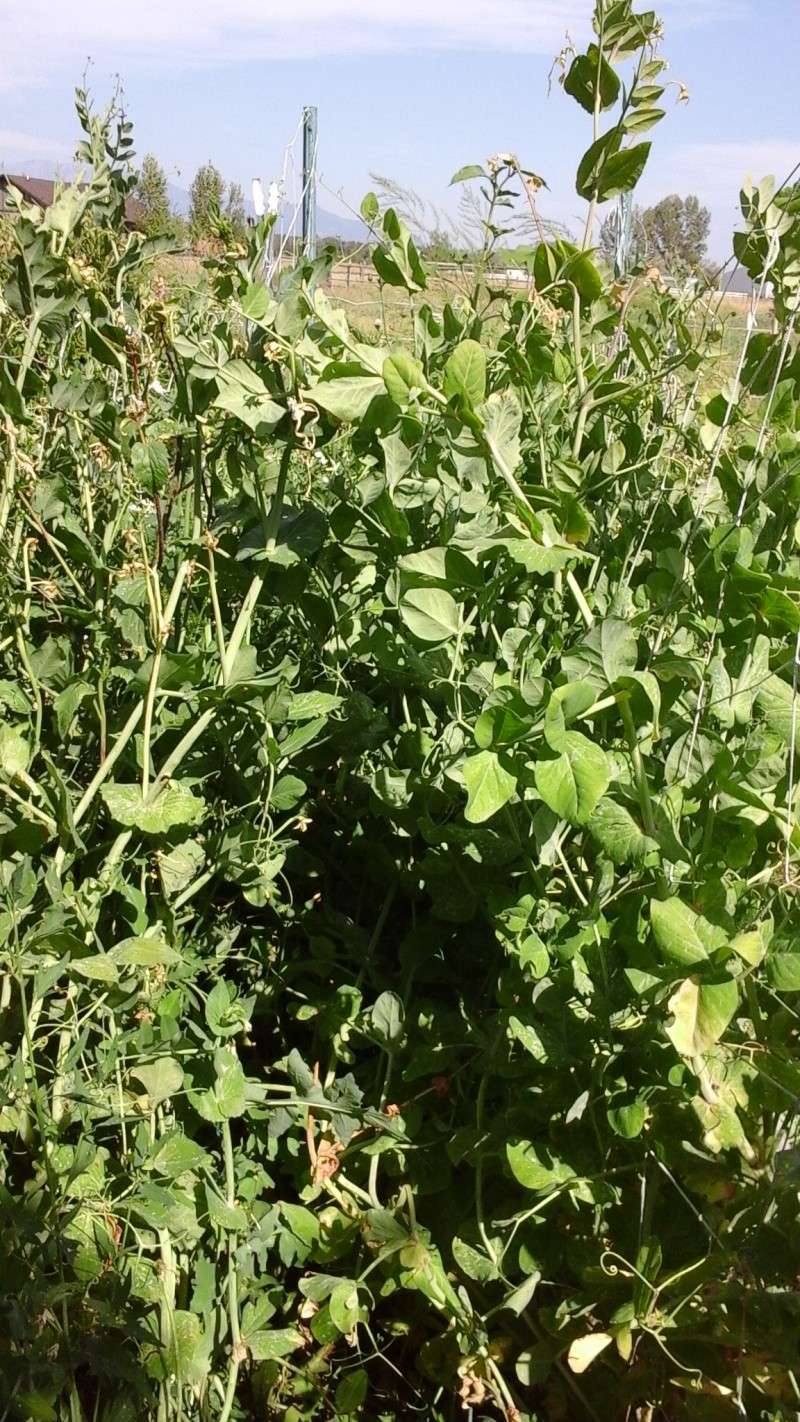 Sugar snap peas have just had their first big flush of peas. 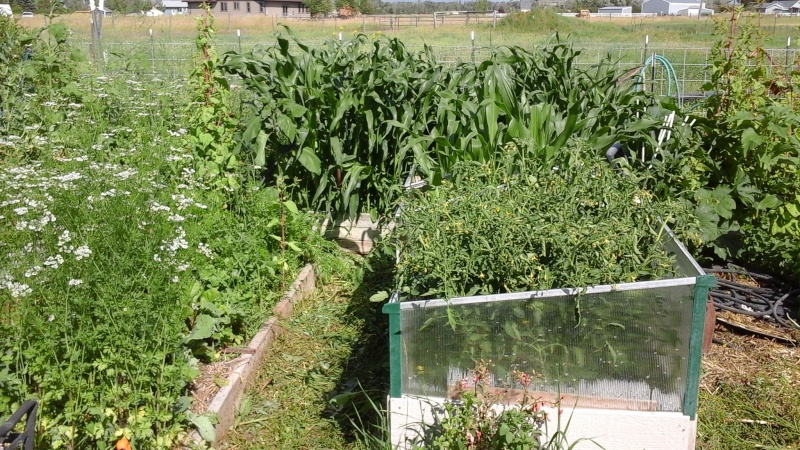 Roma tomatoes and corn with the roots garden to the left.  The white flower is cilantro.  We use it when it has bolted and it will reseed lots.  There are carrots ready to pull in there. 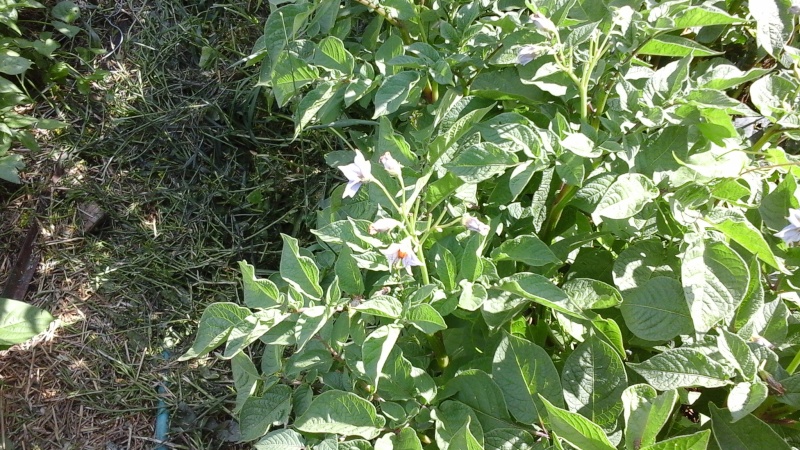 Potatoes blooming.  They are 3-4 ft tall, this worries me that I might find nothing underneath when fall comes. 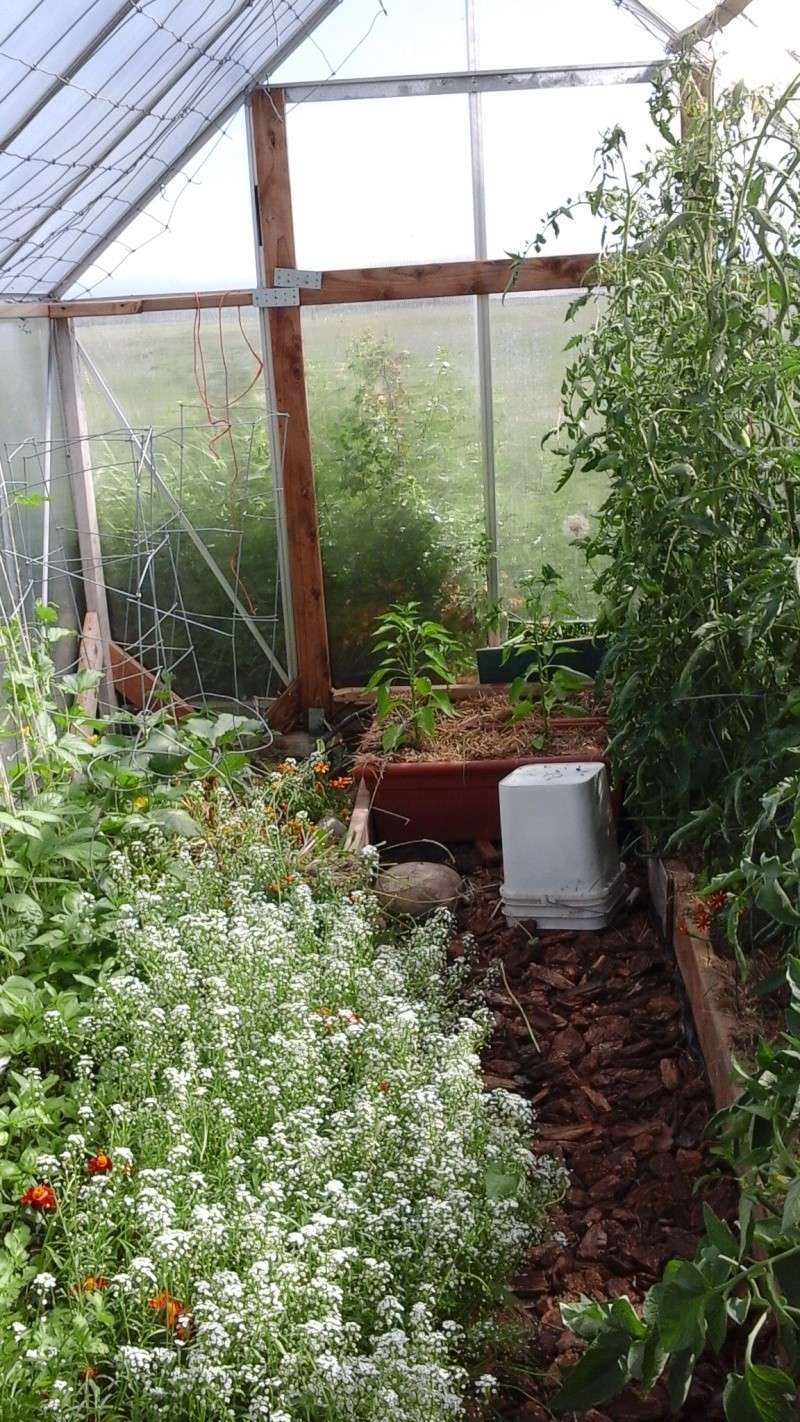 Greenhouse.  The tomatoes are to the roof and the cucumbers almost are.  It hums with bees and hover flies. 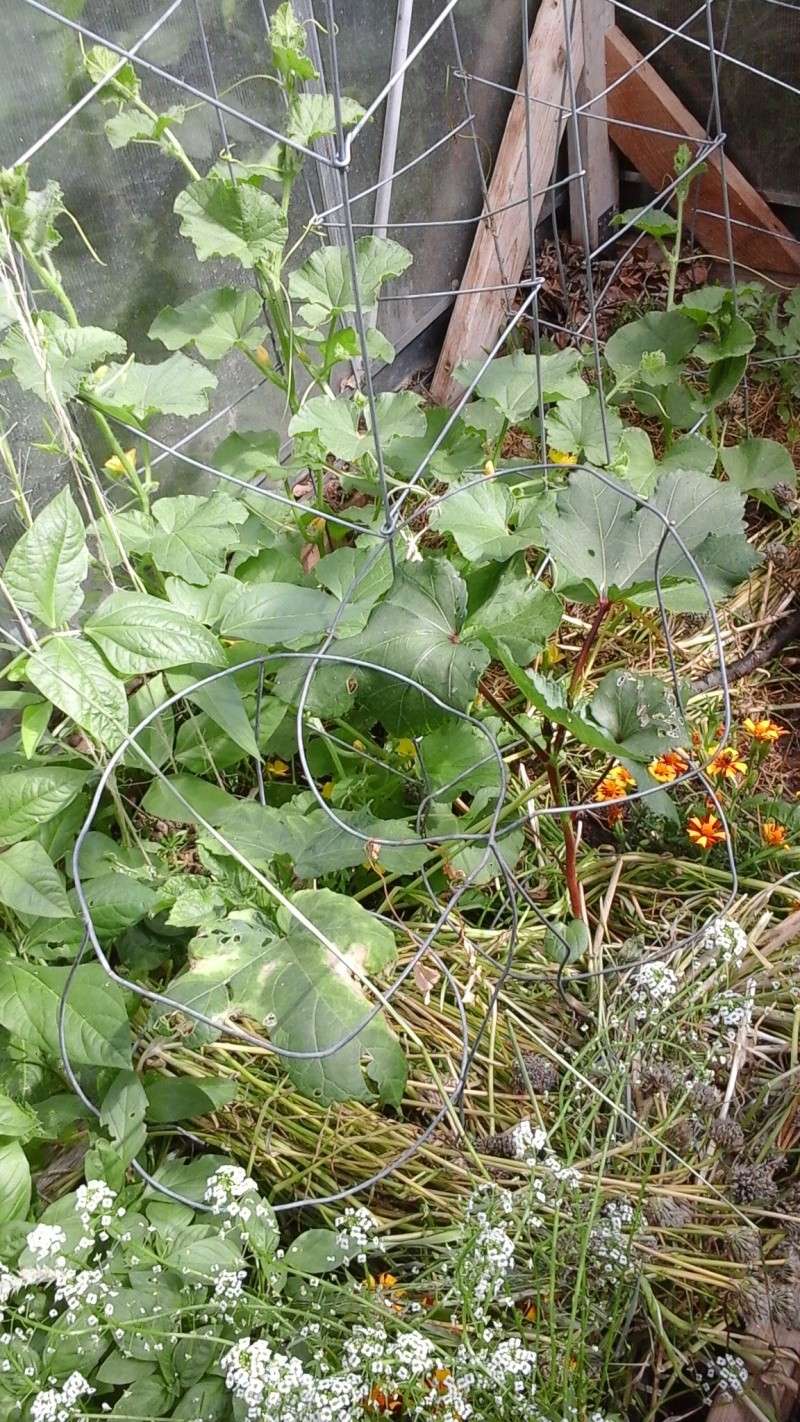 Okra looks happy and growing at last!  Those are Montana Gold melons behind it and they are blooming now. 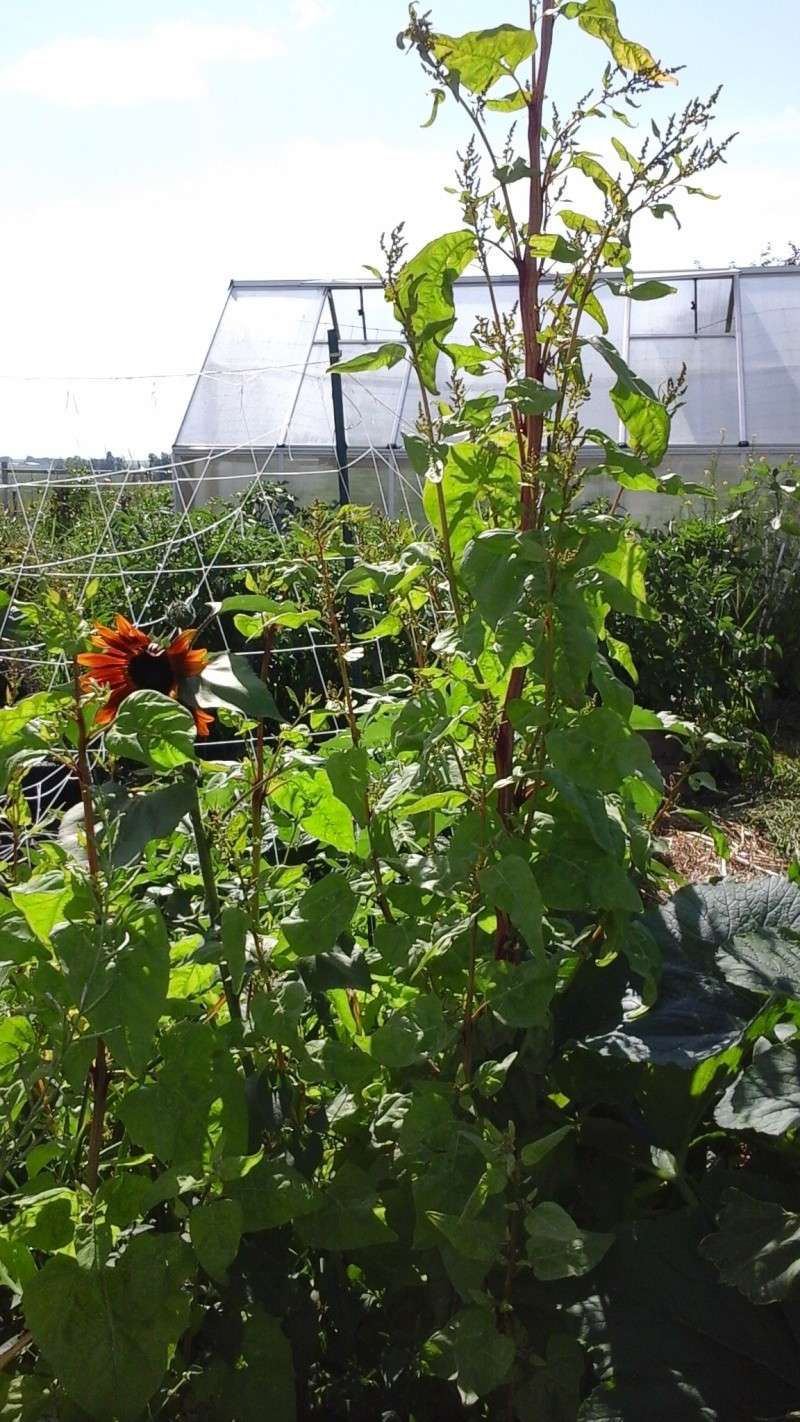 This is the garlic bed.... honest.  The orach and a few sunflowers volunteered and I had no heart to pull them. 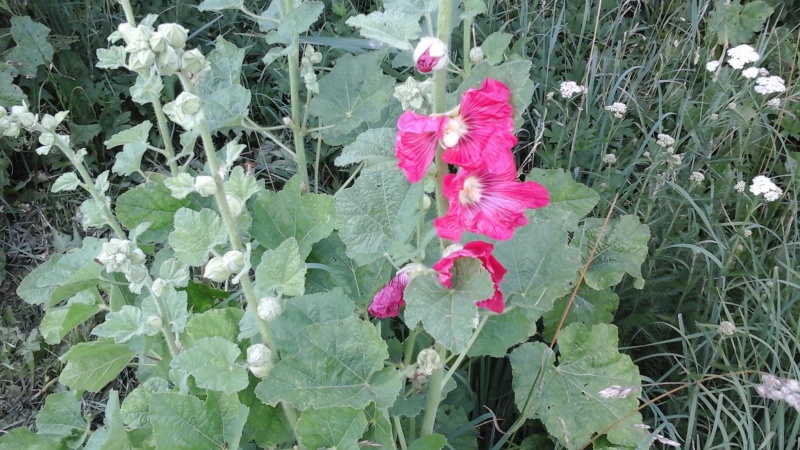 Very impressive. How nice that you can grow both inside (the greenhouse) and out.

Thanks, you guys.  It has seemed a very full of green leafy things summer, more than usual rain and never got above 90.  Sort of the opposite extreme from Sanderson.

We have had 2 light frosts this last week and there is a winter storm warning for Wednesday.  I think the flour corn and soup beans can stay out, they will just keep on drying.  But I picked all the green beans (they were in full flower, needed just a week or two more for a nice big harvest, o well).  I am hoping hte potatoes will be ok still under their mulch, the plants are still green.

I am glad I have a greenhouse.  There are 5 melons growing in it.  I am hoping they might even ripen.  This has been a good year for the greenhouse tomatoes, basil, cucumbers.  Not so good for peppers.

It hit 28F here (Bend, OR) early this morning.  Some of my squash plants were "nipped," and the beans aren't looking as healthy as they were.  Fortunately, I'd covered the tomatoes and tomatillos.

Will the squashes already developing be okay?  Not that I need any more of them....

You guys and your frost/freeze temperatures!!

donnainzone10 If it truly was just the big outer leaves being nipped then the squash should be fine.  If the fruits froze then they are done.  It was 24 last night so we went out in the morning and picked all the little frozen squashes beans and cooked them tonight

sanderson Temps here are supposed to moderate higher into the mid 40s at night over the next week.  It should be lovely until the next storm. I do not envy you right now, but will come december

It is clean up the garden time and I am still harvesting ripe tomatoes from the greenhouse.

12 ID tomatoes and 4 D tomatoes have filled a cupboard with salsa and sauce, 50 pints and 4 quarts so far and a baggy of cherry tomato 'raisins'.

8 peppers have given a handful of fruits.  They are actually now fruiting again.  Next year I use hybrid varieties, up here i need every edge I can get.  Also I let the tomatoes crowd them, that was bad.

16 sqf of potatoes (13 plants) came in at 65 pounds of big perfect tubers.  I thought I had misremembered what I planted but am now thinking they were indeed French Red fingerlings.  It has been a bumper harvest all over the valley due to a wetter and cooller summer, I guess.  My boss showed me a Russian fingerling as big as a child's arm.

18 sqf of drying beans gave a pint.  Sigh, there were soooooo  many pods of barely started beans.  That first frost was fatal.

11sqf of pole beans gave some nice dinners but none to freeze.  They were full of small starting pods when frost took them down.  Rattlesnake beans did not like it up here.  I barely got a handful of them, the Blue Lake beans did well and with 2 more weeks would of filled a few bags in the freezer.

24 sqf of Painted Mountain flour corn made a nice big basket of 50 ears.  Most of the ears are long and fully pollinated.  I planted 3/sqf, as you can see I got 2 ears /sqf.  The inner part of the block did not make ears, and that might be due to being blown over twice.  I am looking forward to trying out liming them and making hominy for stews.  Hookers sweet corn gave us a few ears, not really worth trying again.

Squash do not like cooler wetter summers.  They made lots of leaves and a few squash.  Mountaineer made the most which is to be expected as it was bred here.

I just dug 9sqf of carrots planted last april and got about 20lbs, a full fridge drawer.  We had thinned them in August by pulling some with shoulders for snacking and other ways just ignored them.  I dug a few beets with lots of greens from that bed as well.  The rutabagas are still growing, no swelling to be seen yet but the leaves are big and healthy.

Lots o garlic with big cloves.  I left them in the ground too long so they are splitting.  I'll have to chop and freeze after I plant for next spring.

On hte non tomato side of hte greenhouse~ Okra was a bust.  I got 5 melons and they ripened and were tasty but no water melon.  The noodle beans were fun but I think I'll plant regular pole beans in their place for a larger harvest.  Lots of basil.  Cucumbers did great.

Turan, I crowded the heck out of my banana peppers this year. Not intentionally, but a couple of my tomato plants ran wild over the top of them. Turns out they seemed to like it, and the extra partial shade kept the peppers from getting sun scald, always a huge problem around here. I don't know if you've tried banana peppers, but they might be an option for you if you were crowding them in an effort to save space.

Marc,  I can't disagree about crowding peppers.  There are 13 pots of various sizes in this 3 x 4 area.  They even had a canopy of curtain sheers during the high sun weeks so nothing burned.  I think they like the heat but not the direct sun when it's +100*. 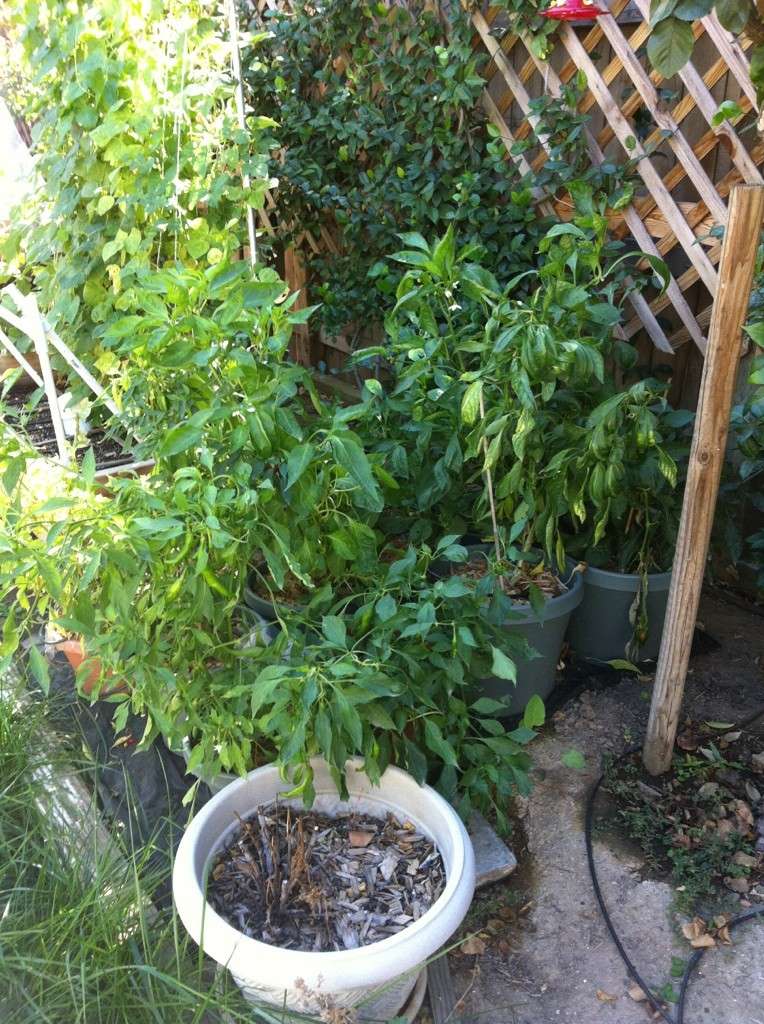 Overhead of the peppers is one of 2 tall (3' stem) Yves Piaget rose bushes. 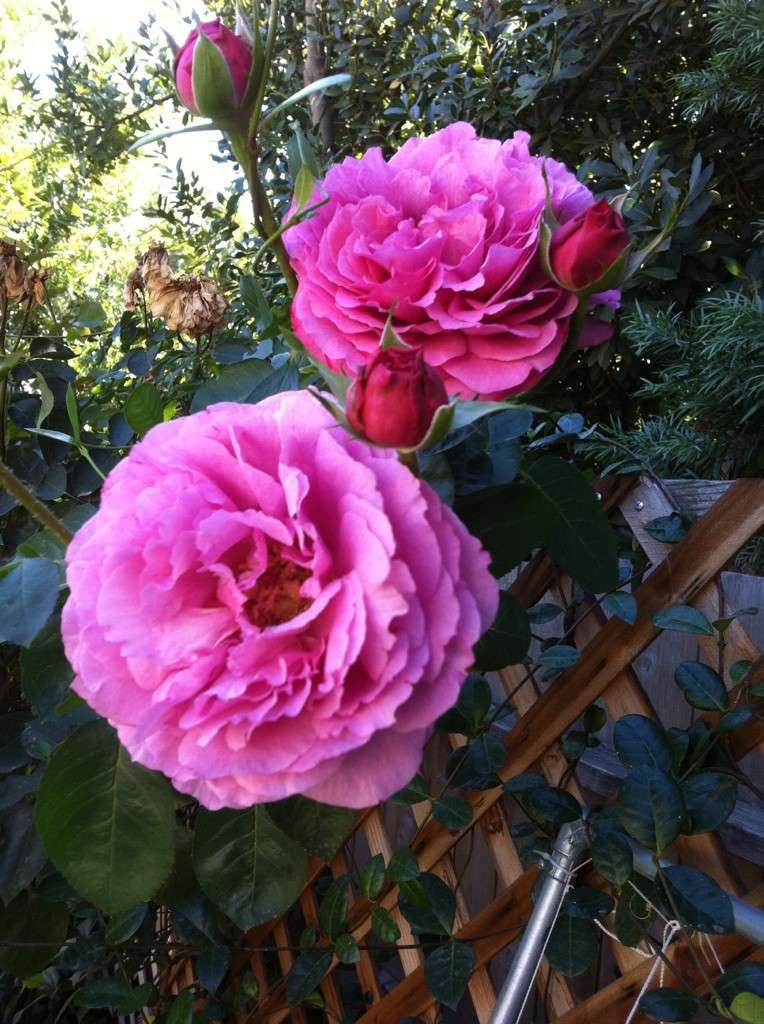 O what a gorgeous rose!
Last year I had lots of peppers in their individual black pots.  So they were somewhat root crowded and not too crowded above.  This year was the opposite.  I suspect the roots were too cool in the bed and the plants were almost buried by the tomatoes.  The plants in pots may of had too much root room, or the pots not being black did not heat enough, or that this year they were not a hybrid variety bred to deal with less favorable pepper lands or all of the above.  I mulched them all, which I think was a mistake.  Next year they get black plastic mulch to help keep the soil hot, more root crowding, hybrid varieties, their own area,  etc.

I'll try a banana variety as well, are they flavorful but not or barely hot?  This year I had under the tomatoes fighting for their life~ Carmen, Syrian 3 sided, Pimento, Shishito.  In long pots in the aisle were poplano and anaheim from Bakers Creek, I suspect those seeds were from plants in New Mexico and not acclimated to even a greenhouse in Montana.  They are just slow moving and I suspect would of liked a heat mat all summer.

@sanderson wrote:Marc,  I can't disagree about crowding peppers.  There are 13 pots of various sizes in this 3 x 4 area.  They even had a canopy of curtain sheers during the high sun weeks so nothing burned.  I think they like the heat but not the direct sun when it's +100*.

Nice roses! Do you trim all but one rose to get one super healthy giant, or let them do as they please? I was reading Flower Confidential by Amy Stewart, and she says the former is a common tactic for farmers growing some of the largest roses.

Your peppers are indeed crowded. But they're pretty tall and look very healthy. I read somewhere from someone, I think, who was some kind of pepper-growing wiz, that "Peppers like to be touching." I imagine that's because everyone says they like quite high humidity under their leaves, and probably also because it protects against sun scald.

Sun scald is really serious business around here and does a lot of damage. Out of a four-pack I bought, the pepper that's done best for me is the one that is all but covered by a tomato running over and through its branches. The second best one is the one covered less than half as much by another sprawling tomato. All four did well, planted about a foot apart each, but they did even better when sharing space with my tomatoes.

@Turan wrote:
I'll try a banana variety as well, are they flavorful but not or barely hot?

Not hot at all. Sweet, with layered flavors.

I've found that the soil makes an astonishing difference in flavor, so I'm not sure if others growing the same plant would have the same experience I had. But in the soil I had, they were very flavorful when I let them get fully yellow, which is when you're supposed to pick them. They've been getting usually six to eight inches long.

What I really liked about them was the complexity of their flavor. Drowning them in salad dressing, they were still nice enough for sure, but they were special enough to just savor slowly all by themselves with nothing on them. They had a bright flavor with some real fruity notes, as if I were eating a peach or something. Not overwhelmingly so, and not in every single pepper, but it added something very special to many of them. I let a lot of them get to full red, and that made them a little sweeter, but I think damped down the fruity aspect a tad. I'll have to eat more red ones to be sure.

Your problems with it being too cold for peppers might mean yours benefit less from shade than the plants sanderson and I have. We have to worry about very intense sun scalding the plants, but also about it evaporating a lot of moisture from the soil and lowering the humidity under the leaves. Unfortunately everyone's set of problems is a little different. I can see that in a colder climate, heavy shading might be pretty bad for peppers rather than pretty wonderful.