We are all a bunch of science geeks in my house. I was napping on the couch yesterday evening, and everyone else was watching Discovery, (I think). They were doing a special on potatoes and all these different things people do with them, how they grow them and different kinds. (My boys were particularly interested in the potato guns!)

Anyway, they did a segment on growing potatoes and other crops in space, and how they have developed a more efficient way to do this in preparation for extended explorations. Now, I was half asleep and only had my eyes open for parts of it, but they had this system where seedlings are suspended in air, absolutely no soil or water, and they were sprayed with a liquid nutrient mixture for 3 seconds every four hours. They said it was sufficient because roots did not have to work through dirt to get what they need, and they show showed one-week-old potatoes that were about the size of a walnut. I did not catch the kind of light they were using, but it was sooo interesting!!!

I tried to google it this morning and found lots of different processes they're working on but not exactly what I saw last night. The below link on aeroponics is close to what they were doing I think:
http://www.aeroponicgardenseeds.com/2010/08/18/why-should-i-care-about-aeroponics/

I thought it was super cool and wanted to share with you guys! 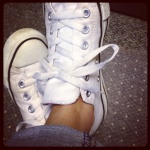 This is really quite interesting. I read the information in the link you posted. I tried to click on the NASA information link, but it would not load for me. So, I began looking for more references to aeroponics in space. I found this one in wikipedia:

Finally I found this Youtube video about growing veggies on earth using the same NASA technology. Food from this featured grower goes directly to restaurants immediately after harvest:

Janetdunit, thanks so much for your post on this subject. I am very intrigued by the whole method. It is fascinating that this technology can actually be used in space!

Imagine the quality difference in the food if this were indeed something that caught on and became a part of running a restaurant?!?!

I'm thinking this could make a great project to do with my son. I wonder what exactly they are misting with? I'll have to do some more research.

Those nice crisp cannon ball sized crunchy iceberg lettuces you buy in the shops are being grown in the misting system method so are some celery .
They were using fish tank aquarium air pumps to bubble the chemical mist spray to the plants roots .

I saw that on the, " Country File " TV prog on BBC several months ago .

Re: Growing potatoes in space

If you have a chance to visit Disney World in Orlando, you can see quite a large aeroponics setup in operation. They have greenhouses full of both hydroponics and aeroponics. They use the produce in the restaurants in the parks. Here's a link to a short film from 2008 showing a behind the scene tour of their greenhouses.