I have a couple of different questions here.

First of all, since I've been repotting all my seedlings, I've run out of room under my grow lights. I bought the sunblaster T5 HO lights, two 4 feet long bulbs hanging on chains, and have the plants lined up on my massage table. Now that they all have their own containers, (and still a few more that need transplanting) I need more lights, but I don't know about spending another $100 on lights since I still have to buy the stuff for MM and the lumber to build the beds. Are there other alternatives that will work on my seedlings until I can get them out? Right now I'm putting the bigger ones outside during the day. I have an iron, 3 tiered plant stand that I was going to convert into another growing stand. I thought maybe surrounding it with foil would help keep the light in, but I don't know what kind of lights to buy.

The second issue. I was just taking some of them outside, and this tiny bug was crawling in the dirt on one of them. I'm not sure what it was, maybe a spider mite, maybe a baby spider, but I want to nip it in the bud. What can I use on baby seedlings that is organic and won't hurt them? It seems that blasting them water would do too much damage. HELP!

Keep taking the plants out on warm days and bring them in on the colder forecast nights . A couple of days inside on the floor by a window won't hurt them if you get a cold snap.

Google images have pictures for you to consider .

Jazzy, isn't it about time to be transplanting your wee plants out into the garden? When is your last frost date? can you put together a small cold frame if the garden isn't ready? If you cycle some of your plants out of the house you will have more room under the lights, I presume.

Thanks plantoid. I'll go check the book and the google.

camprn, yes, it's about time to put them out, but I thought they should be fairly well developed first in order to get the best start. I've just transplanted them up once in the last couple of days. Most of the larger transplants have one set of true leaves and some are beginning to develop a second set. The smaller ones are just now starting to develop their true leaves. For some reason they didn't take off like the other ones, probably because I started them in those tiny jiffy peat pots (won't do that again). And I still have to build my beds and get all my containers ready. So much to do, so little time. And, while it hasn't been freezing here, we have been having some unusually cold nights for this time of year and many rainy days/nights. Even had some hail the other day. The weather has just been very unpredictable and crazy. Am I wrong to wait? I know some people who haven't even started their plants yet. I started mine about 3-4 weeks ago.

All I know is it was some tiny, tiny spider looking thing. I didn't get a good look at it, but it was fast and it was crawling over the dirt. Is there a specific place to look for identifying pests? Also, is there not some good insecticidal soap that will work for most things? Like maybe a garlic/red pepper spray? I don't want to repel the good insects though, just the bad ones. 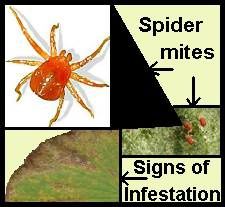 hmmm... I looked up a couple of things about spider mites, and the tips of the leaves look brown and wilty on a couple of the plants, mostly the tiny ones that haven't developed much yet. And from what I can tell, it did look like those things. Is it possible they were in the potting mix? I bought a high quality, expensive mix to transfer them up. Of course, the first day I also worked outside, so I guess they could've gotten on them then. But I never saw any bugs until I potted them up with the potting mix, and I go in several times a day and brush them with my fingers and put a fan on them and just look at them.

I just went and sprayed the top of the potting mix with a spray bottle, and I only saw one or two little flying bugs, like gnats or something. I didn't see anything actually crawling anywhere, so perhaps I jumped the gun and got a little paranoid. I know I will most likely lose at least a few of these plants, from what I've read, all of them hardly ever make it. But since there is obviously something there, whether it's gnats or something else, I guess I just need read up on how to best protect them from anything getting in there and becoming a problem. Whatever they are, they are tiny, tiny, tiny. *sigh*

jazzycat, don't panic, you will do fine! My DH says it's like living in a forest. Your plants must get prepared for living outside with 'all' the different bugs.
A spray bottle with just a tad of dish soap might help. Otherwise you could pick up an organic bug spray, but only spray lightly, don't wet the plants down.
I also have a small flying bug, which I think is a gnat. I have worms and made some dilute worm tea and sprayed my plants. They are growing leaps and bounds and we are expecting a mild frost tonight, the plants want to go out in the garden!
I'm only abt. 65 miles ne of Savannah.
Jo

Hey Jo! Nice to meet someone so close by! Thanks for the encouragement. If I see any more bugs, I might mix up a weak solution of something and lightly mist them while they're outside.

I'm hoping to get some of them out over the next couple of weeks.

The weather has been so freaky though! It's freezing outside right now, and it was so nice out earlier today.

I am alternating days under the grow lights until I can get some more things planted out. And putting the seedling outside on warm days is starting the hardening off process so you will be able to go directly to your beds when you get them up and running.

I got two more grow lights today. These are smaller because I have a metal shelf stand (plant shelf? baker's shelf?) that I will be putting them on because I'm running out of room. The shelves are 2' long, so I got two of them (the other ones are 4' long and I have them over my massage table). Lucky for me, the owner of the store sold me one (with a light reflector) that he'd been using in the store for less than the price of the light alone. So basically, I got the reflector for free, and the light on discount.

And... I bought one new. He told me how to make them though, so I can just buy the bulbs, because the bulbs aren't that expensive. So I will probably be going to buy some parts tomorrow or the next day and see if I can do it. If I can't, I KNOW my fiance' can, and he'll be here in a few days. soooo... yay.

I think I may have just overwatered some of my seedlings though. OOPS. Now I'll have to go dry them out. That happened once before and they were fine. I'm not sure how to water them properly. I read that tomato seedlings die more from overwatering than anything, so I've been keeping more on the dry side than the wet side. Since I've potted them up though it's harder to know how wet/dry the soil is deep down. It's very crumbly and it doesn't seem to hold water the way the peat pellets did. Any suggestions?