May Avatar: Not Just Veggies! (click this)
Welcome to the Official SFG Forum
!!! Happy Gardening in 2020 !!!
Search
Latest topics
» N&C Midwest—October 2020
by OhioGardener Yesterday at 3:25 pm

» TD - A Journey Through Prostate Cancer
by AtlantaMarie Yesterday at 7:16 am

I am in the midst of making this beef stew. Due to the current limits of my pantry I used reconstituted roasted dehydrated tomatoes instead of fresh, red wine instead of white, hot pepper flakes and two drops of liquid smoke instead of the smoked paprika and a tsp of chicken base, white mushrooms instead of oysters....

This recipe is very wordy, but the process is very simple I have included the video link, which will play through 2014.

OMG! it smells so good. 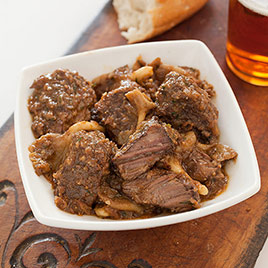 A slow-cooked mixture of onions, tomatoes, spices, and herbs—known as sofrito in Spain—forms a flavor-packed base for the stew.

We typically use red wine in beef stew. Here, we agreed with Spanish cooks that red wine ­competes with beefy flavor, so we reached for white instead.


SWAP THE ROAST FOR RIBS

Most stew recipes (including many of ours) call for chuck-eye roast. Boneless beef short ribs are even beefier-tasting and are easier to break down.

By cooking the stew in the oven and leaving the pot ­uncovered, any part of the beef not ­submerged in liquid can brown, making searing unnecessary.

A mixture of ground toasted bread, almonds, garlic, and ­parsley—the picada—stirred in before serving brightens the stew’s flavor and thickens the broth.

That looks like a winner camprn! America's test kitchens have given me many a great meals over the years. I will bookmark this and give it a try when I am in the mood for stew. Thanks for sharing!

Thanks! I love ATK recipes. Wordy is fine, because they give you so much info that you can translate to other recipes - the WHY of the step. My sister sends me their books on occasion. I love to read them just as a good read!