Ok skipping most of the health issues and drama

that happened during the last couple of years I'll start with, Secret Garden sink HOLE :scratch:

Trellises attached to 2 of the large tree pots and White Grape vine transplanted into one of them,

.
As you can see in the center there is a 2x2 pole sticking in the ground 2 to 3 feet deep

"what the heck" I tilled & filled that area 3yrs ago and it was in good shape, I have theorized that there might have been some dead roots from the stump that Termites may have finished off over the years and now the ground was sinking in to fill them

In the first picture above you could see wood planks & camping chair turning more to the left you can see the rest of my Bucket project starting (what a mess) lol
Since everything takes money usually I came up with ways to recycle some stuff I already had like using old medicine bottles to replace normally used rocks at the bottom for air and extra water run off. also it saved me a lot on compost-manure-dirt. I used some of my old oxygen air tubes to drain off access water to other buckets below each step (I found out gravity requires more depth than I first planned) so I am either jumping a step to use or in some situations not at all.

First stair case built and filled with what few buckets I had.

The black pots were what I was installing into my white buckets but started using to get the starts out of their root bound nursery containers.

I used my son's cell phone camera to take pictures of the right set of bucket stairs and he swears he emailed them to me but nothing has shown up yet. 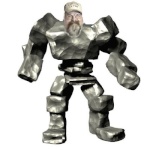 Squirrels Raccoon's Skunks Oh My!
Grumble grumble grumble still on my new members week so I will have to update this later with my Utube video but here is a picture place holder hehe

This little cutie showed up a couple weeks ago an at first I thought he had been hit by a car but it turns out he was just enjoying the sun between grubs, worms, and bees lol. My roommate said there was a full size Skunk eating away on our back patio Dang there goes my free starter worms for a com poster..

by by little buddy
Right at the end of StinkyLaPew short film there is an interesting Red growth on top of some moss in the crouch of a tree across the hwy, it has since turned brown but would sure like to have it on some of the trees on my side of the hwy.

I am jumping ahead to present since there has been a lot of talk about Tomatoes on the forums.
My Tomato plants have out grown there buckets, cages and my stair case holder.

I started changing things around in my original project to move my Tomato plants out to the ground, this required digging

one of the hardest things for me to do now days and even before health stepped in the ground is almost concrete. I got out my tiller and started in on the 3 holes I would need and my tiller quit working I disassembled it and found some wrappings like an old bandage. After clearing all matter and oiling it up I started in again the next day and I got a few inches before the tiller motor started smoking [RIP]

to late to separate the root ball they had already intertwined down into the water holding area. I mixed up some B1 and crossed my fingers an am happy to say they survived. Now the other 2 holes are a different story I have sent out messages to my son

[working full time and going to school] that I need someone to bring over a pick or TNT so I can finish the transplant before they become even more root bound.

Ok I have changed projects until I hear from one of my kids to help me on the holes needed in the mean time I have more plants that need to be moved also and I figured since I can not dig I would make a large wooden planter box for them (all new types of flowers to attract) and they (smell fantastic) I will place it in the gap on the right side of My Secret Garden below the Bee hive in the old Oak tree.

WE NEED TO HELP THE BEE's. Now I know what the skunk was eating since I don't believe I had that many grubs & worms in the area he was feeding. I have found many bees just wandering around in the grass there below the hive I believe have CCD Colony collapse disorder just google it. Other than wanting to take over by manual hand pollination we need to be concerned about this. The more you attract them the bigger and better our gardens will be. :fall:

Similar topics
» Ready to get started in Texas
» How Old Are Our Gardeners?
» Forty years ago today
» Free Seeds
» My joy in gardening - the short version