» Newbie SFGer in N. Virginia needing some advice
by SFGHQSTAFF Today at 3:19 am

» Tomato Mosaic Virus...Fearing the Worst :(
by AuntieBeth Yesterday at 9:15 pm

» Tampa newbie
by funnygroundhog Yesterday at 8:07 am

» Cheerleaders needed, please. This is daunting.
by sanderson Yesterday at 4:35 am

This is a Mr. Stripey tomato plant. The plant hasn't really done much in the 2-3 weeks it has been in the ground, so I pulled back the MM to see if I could find something wrong.

The stem that was covered by MM is really, really flat and dented. It's as if the stem was folded in half. The part where it is above the ground has the indentation too. It's not as flat as the part that was underground.

This is my first time attempting to do a single stem method on a trellis according to the book.

One of my Sweet 100 plants has a similar stem issue. That plant wasn't growing either. These two tomatoes are in two different raised beds. The other tomatoes
in the boxes are either growing and/or their stems look normal.

The plants aren't dying, but they aren't growing. Is this some sort of disease process? Any suggestions?

Can we get a picture please. Might make it easier to get you an accurate answer.

Sorry, I thought I attached a picture previously. (The pic shows in my original post for me...)

Mr. Stripey is in a new bed with duck doo, vermicompost, leaf mold, cow manure, and mushroom compost as well as peat moss and vermiculite. The Sweet 100 is in a 2 year old bed made with leaf mold, vermicompost, cow manure, mushroom compost and I don't remember the 5th but it was a different one. It's been supplemented with homemade compost this season. 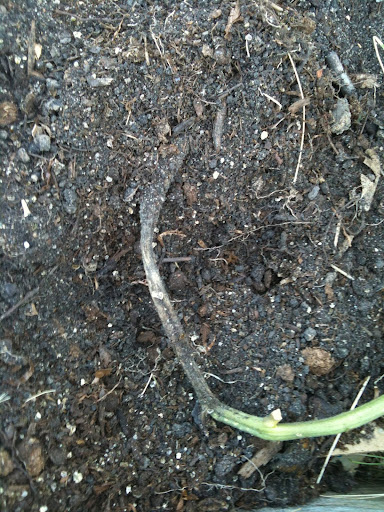 Sorry, I still do not see the photo.

I can see the picture. It looks like damping off but in a large plant.

Oh I see it now... yeah some sort of fungus. You could try salvaging the stepm by cutting it well above the mess and pop it in a jar of water for a day or two. It may put out some more roots.