A few days ago, we found a Green Tree Frog who had decided the back of our house was a nice place to hang out...he's now my avatar, but I'll share him here so you can see a larger version: 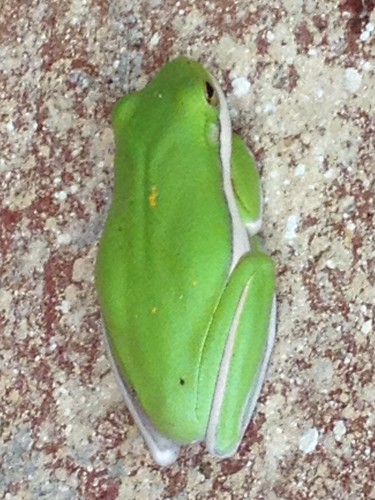 Today we made two new critter discoveries, and we think we'll be happy co-habitating with these new friends...These first three photos are of a pair of what we think might be some type of forest salamanders. They're quite pretty, and I'm relatively certain they'll be good neighbors to have. 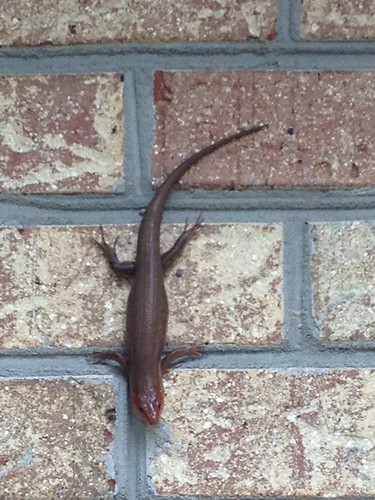 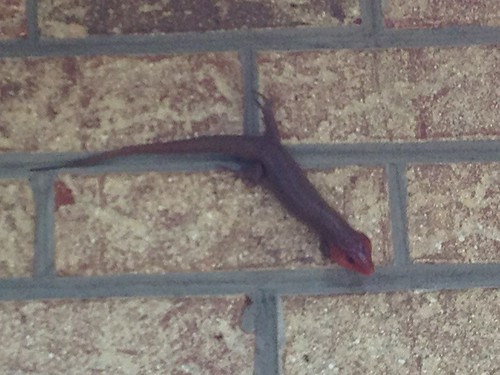 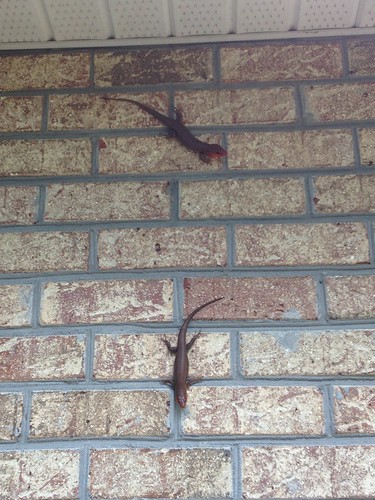 Then, when we were standing near the place that will soon become a raised flower bed discussing options, we spied something suspicious through a hole in the weed cloth we had laid down hoping to kill the weeds in that zone. (Must be really cheap weed cloth; it tore within days of laying it down.

You can see just how well that plan worked on crab grass!) Anyway, we moved the cloth away to see what exactly we'd found... 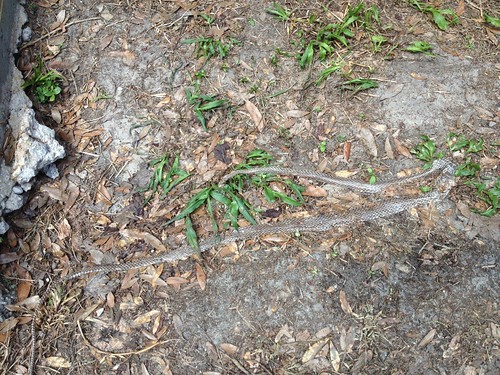 So, we wanted to find out just how long this snake was when he decided the weed cloth made a great hiding place to molt. I moved it to the path so we could see it better, cleaned it off a bit, and stretched it out gently. My husband put out a tape measure to compare; it's around 4' long. (BTW, I live with three guys in this house, ages 40, 10, and 5, and I (a woman) was the only person willing to touch it! 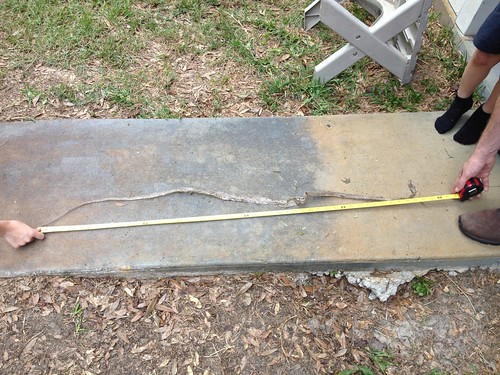 That skin probably came from a snake we found in our yard when we bought this house two years ago. We found it up in a very tall bush on the side of the house the first week we lived here, but we think it's since moved to a new home. I call it a Black Snake and my husband calls a King Snake. They're well known for eating other snakes we don't want around, like copperheads, and they also like mice and rats. Definitely nice to see he's still around!

The fat neck, stubby skinny legs and red throat makes me think the second set of photos are of a skink. We have those around here in Houston and I wouldn't be surprised if you had them in Florida also.

Thanks for the hint H_TX_2! I got a chance to look the lizard-like guys up, and it turns out they're a Broad-headed Skink.

They like bugs, so we like these skinks. Not sure I would've been able to identify these if they hadn't been males showing their orange colors during the mating season. I just hope our black snake doesn't eat them and the frog.

They would get so teased at my house lol..I have two ball pythons, one is 4' long and is a spoiled baby. The other is 5' long and I will only handle her the week after she has been fed...she is a little grumpy lol..

CindiLou wrote:They would get so teased at my house lol..I have two ball pythons, one is 4' long and is a spoiled baby. The other is 5' long and I will only handle her the week after she has been fed...she is a little grumpy lol..

The skin is now hanging on a nail in our screened porch.

I did manage to talk my sons into touching the skin eventually. Once my younger son was convinced it was no longer holding a live snake he was fine with it. My older son gets creeped out by bugs and other things, especially spiders, so I wasn't overly surprised at his reticence. I don't know why my husband wouldn't touch it...