May Avatar: Not Just Veggies! (click this)
Welcome to the Official SFG Forum
!!! Happy Gardening in 2020 !!!
Search
Latest topics
» new eastern redbud looks like it might need attention
by bkrieb Today at 5:44 pm

Hi everyone, I've been devouring this site since I read Mel's new book a few weeks ago and the bug has hit big time. I've learned so much so far!

As kids, we were always gardening and on and off in the past 15 years, I've had a traditional backyard garden in the 20x25 foot range. I love gardening, but the last few years gardens have been challenging because of the soil and the weeds that I could never overcome. I'm in NE FL and already the temps have been crazy hot in the 90s. I just can't tolerate being out in the heat long enough it would take to weed that garden again on a regular basis.

Last year I went crazy buying heirloom seeds. We also purchased some 4' decorative fencing to block off the 1/3 of the yard where the garden is so our dog wouldn't tear off through it. This year, I wanted an easier way to stay on top of the garden, so I bought and read Mel's new book and the lightbulb went off -this will make a huge difference!

We started our compost bin a week ago, and one 4x4 box has been built, two more are cut and ready to be assembled, and I'll probably build at least 3 more. I bought the 5 types of compost, the vermiculite, and the peat for the first three boxes. All the seeds were planted by the kids inside over spring break and are all growing nicely and we're looking forward to transplanting them to the boxes once they're finished and filled.

I've also been doing a lot of searching on here about the drip irrigation which I will definitely need because of the temps. About 6 or 7 years ago, we put a sprinkler system in and we zoned it so that an area of the backyard where we had our garden would be on one complete zone. It was laid out so that no pipes ran underneath so we could till it and all the sprinklers would cover the entire area. After reading something on here, I'm planning to convert each of the sprinkler heads into a drip system for each box.

Hopefully before too long I'll have some photos to share, but I just wanted to say hi and to thank everyone for all that I have read so far that has already helped me so much!

Hi KDeus, it's nice to see someone in my corner of the state! I'm in Lake City, and you're right, it's been unusually hot this spring! What a strange year, with virtually no cold weather at all and summer temperatures before we even reached April.

I'm just getting started, too, so you're not alone. I direct-seeded the garden since it's so hot, just to skip a step. Maybe next year, when I'm getting things started earlier. I'm not doing irrigation, for now, but I figure I can water every morning and see how things look in the afternoons to determine if a 2nd watering is needed. We have a 15 year old irrigation system here, and the pipes are cracked, the sprinkler heads (where there are any) don't spray properly, and the lawn itself isn't irrigated much at all...only the flower beds are.

Hi Michelle, thank you for the welcome! Yes! You're a hop, skip and a (long) jump from me. I'm just an hour east in Orange Park/Jax. I'm hoping that the hot weather we've been having isn't a sign of what's to come this summer. I'm a northern gal who has been down here since 1993 and I still haven't adjusted to the heat.

With the kids and just life, it's been busy and I just didn't pay attention this year to when we should have planted the seed. So, I figured it was a good spring break project for them. They did a great job and planted all the seeds except the really really tiny ones, and we only had to re-seed a few things. My garden area hadn't been tilled yet and I was dreading it, so I started reading up on SFG and am excited. So, I guess it all worked out with forgetting to plant earlier!

I'll probably convert the sprinkler heads over time after testing one out first. I'm hoping to get the other two boxes built this weekend. I couldn't do it this week because of all the smoke that was in the air - for now, it's gone. Was it bad there?

I look forward to learning about this with you!!

Keely, I just wrote a bunch, then hit the wrong buttons and
lost it all! So, I’ll try typing in Word and then cut and paste so I don’t lose
my message this time...

The smoke was really bad for several days here, almost like
fog, but the smell of wood burning was strong and we even had some ash falling
a couple days when the wind turned the right (or wrong?) way. This horrible drought is killing things; the
lake behind my neighborhood is looking more like wetlands these days. I'm honestly shocked at how green it is! When we
bought this house, the lake was shallow, but we saw a lot of water (it got a lot of
algae that summer); now there’s grass growing across most of what used to be water. I’m surprised everything is as green as it is

; this will definitely be a
difficult place and time to grow a garden. My son asked if the ash would hurt the
garden; at least I was able to tell him that there wasn’t enough to make a
difference, but if anything it would help.

He’s fascinated by applied science,
fortunately. I’ve been talking up how much better food grown this way will
taste, hoping that’ll induce him to get more adventurous with veggies. This ash
reminds me of when Mt St Helens blew in 1980; the farmers had bumper crops for
a few years after tilling that into the soil. But we didn’t get near as much
ash here!

We got the garden started during spring break too. It’s a
great time for us to do spring projects, since my husband has similar holidays
to the boys during the school year. (He’s a professor.) The boys had a ball
assembling the boxes, hauling huge soil bags around the house from the garage
on a tractor-style tricycle, and hoeing the soil down so it was even. The
planting of seeds got too tedious for them after about 5 squares, so my husband
and I had to finish the job. The like to go out and see what has sprouted each
day, and how the sprouts are coming along. Honestly, I go out at least twice a
day to look, too! I have a cherry tomato that’s got at least 7 flower buds
already, which has us all excited.

Orange Park is where we most often go to find the things we
can’t get here; it’s only ten minutes farther than Gainesville, and the stores
are much bigger in Orange Park than in G’ville, so we have more to choose from
there.

BTW, I’m a Northwestern gal, but I’ve been in the South my whole
adult life…mostly in VA and NC, though we’ve been here since 2007. I never got
used to the heat either. Fans and A/C are my best friends! All my gardening
will be done in early morning or a couple hours before sundown, and I hope to
get an automated soaker hose thing going eventually. I want more boxes first,
though.


It’ll be nice to have another person in the region to
compare notes with! Oh, and did you see the link I found to a UF Extension
planting calendar? That and the book I got (written by my husband’s cousin!)
are going to help me a LOT in determining when to plant my veggies, etc, in the
future! I promise to share what I learn.

I'm thankful that the smoke has cleared somewhat. The smoke was burning our eyes, noses and throats on Monday and Tuesday, but wasn't nearly as visible as it was Wednesday when it literally rolled in from an apparent closer fire. Here's a photo of what it looked like rolling in Wednesday afternoon. The stinging in the throat, eyes, and nose was even worse. It left the orange hue you see here over everything until the sun set. The next morning, we had blue skies. 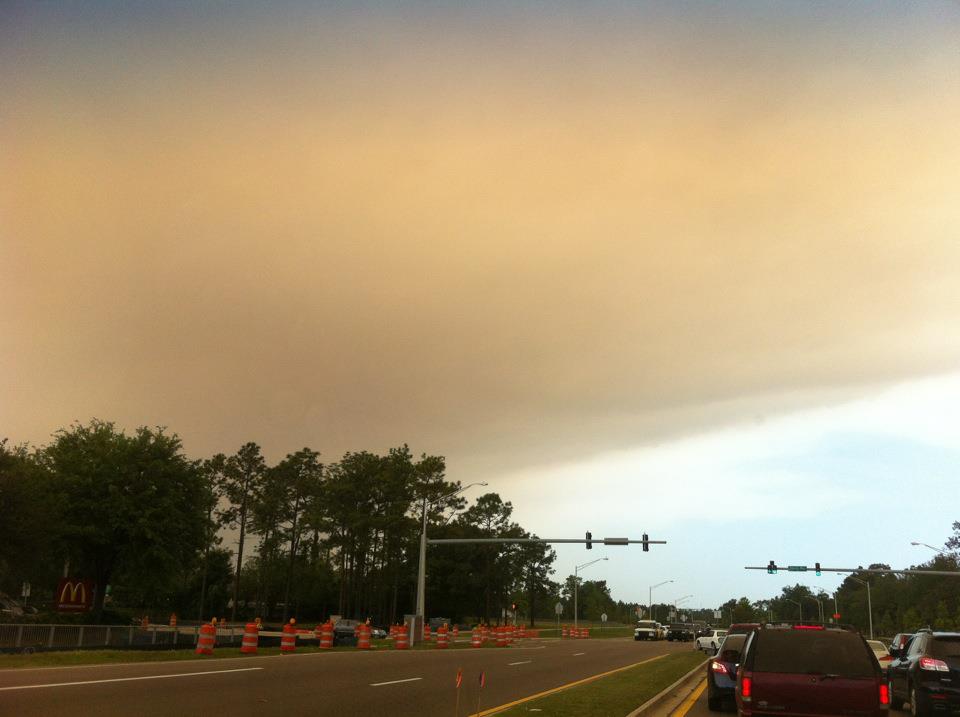 The lakes around here are very low, too - the lowest I've ever seen them - and they, too, are growing grass around their edges and on sand bars that were at one time underwater.

That's great that your son loves applied science! My little guy does, too, and is always asking questions. Great observation he had about the ash! I moved my trays inside to get them out of the smoke, but I wasn't even thinking about the ash. It's so neat watching their interest in things that they've planted. But as you mentioned, more challenging actually getting them to eat them! We do a lot of juicing and both kids love it. A lot of the veggies are sweet when mixed together and if a little sweeter is needed, an apple is added. My kids won't eat the hot peppers, especially the Datil's (I'm the only one who will eat those), but they're pretty good about trying most things.

I do love having the stores so close. I used to live in St. Mary's GA (my ex was in the Navy) and we were always coming to Jax or Orange Park. I had planned to finish my college at UF so we moved here to OP. The town I'm from in PA was very small - it was usually an hour drive to any kind of shopping, so I am thankful for the closer choices.

I DID see that link to the UF Extension. Thank you! I had used MotherEarthNews garden planner for the planting times, but will definitely go through the UF site more since that's a more localized planner

I also saw the book you mentioned. I might have to check that out! How great to have someone in the family with such knowledge!!!