My grandson helped build two boxes (7x4 and 6X3) and fill them today. We used composite deck lumber that we got for a song, on Craigslist.

I was careful to do the Mel's Mix according to the recipe... vermiculite, peat and five kinds of compost (cow, sheep, chicken, mushroom and humus). Next step is hardening off the cool crops that I have started in the house ... they're tiny, but I have high hopes of broccoli, brussels sprouts, kohl rabi and cauliflower. Summer crops are started too, and my tomatoes have their first true leaves now. They won't go out until mid-May.

Here are a few pictures of the work in progress.

Two empty beds... with a smile! 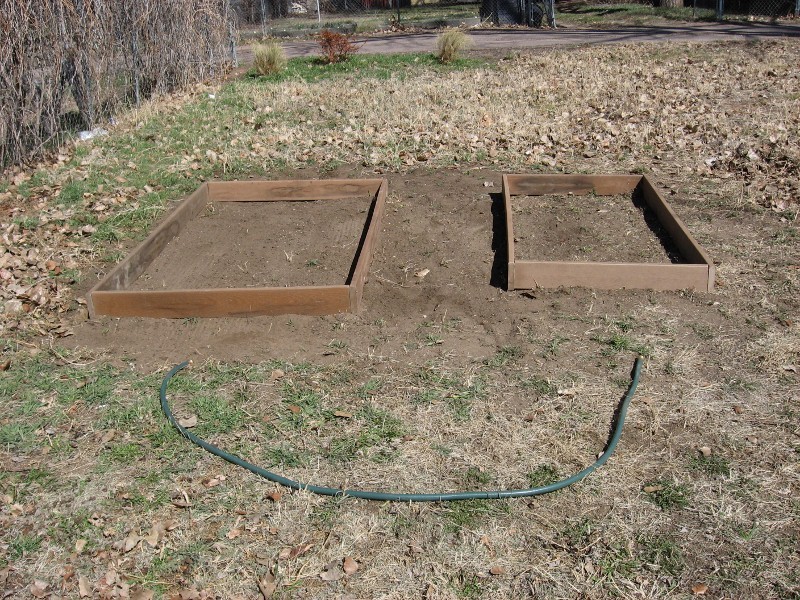 Beds with weed-cloth lining ... doesn't it look like 'eyes closed'? 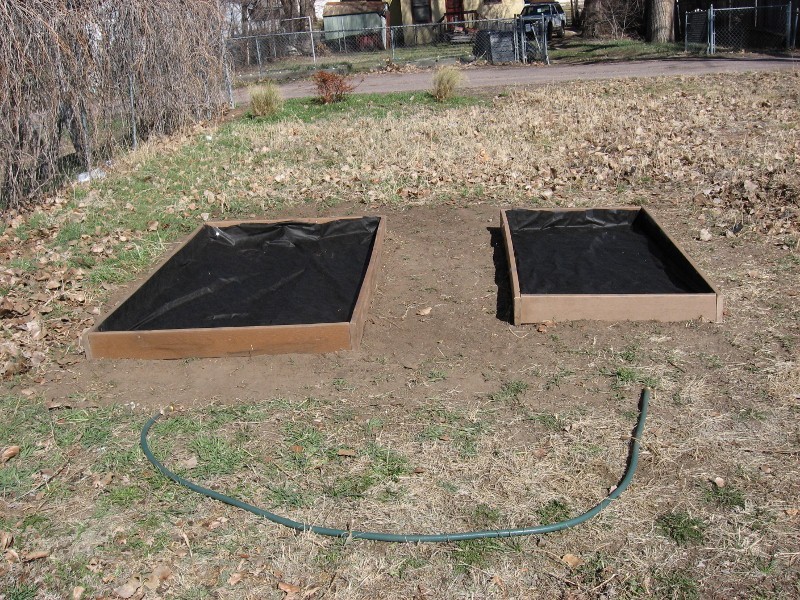 Here's my mix. After trying several of my grandson's 'ideas' we mixed it using the tarp to roll it back and forth, just like in the book. 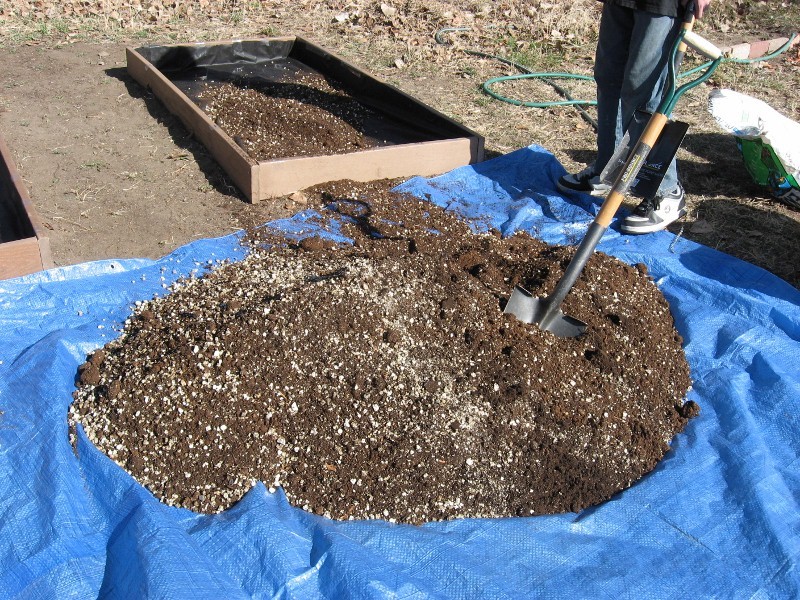 Here's my grandson, Tal, filling one of the two beds. He's just as anxious for tomatoes as I am! 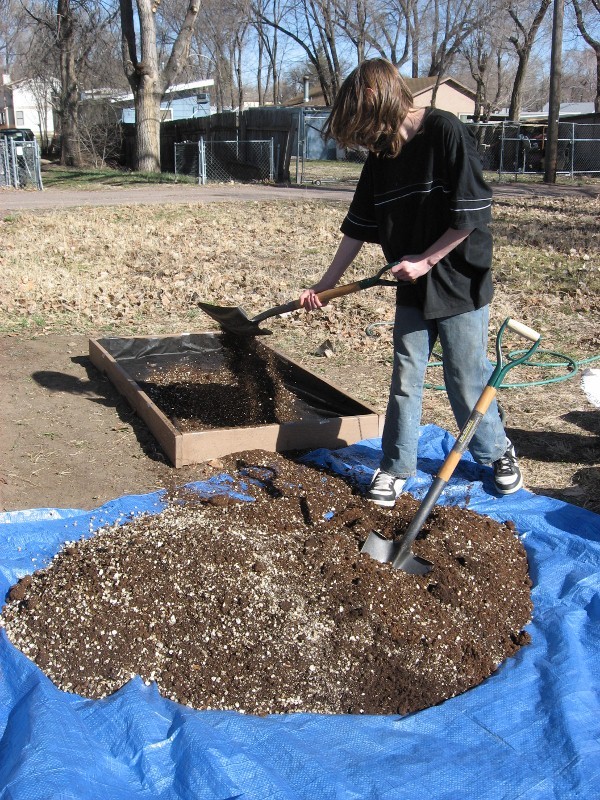 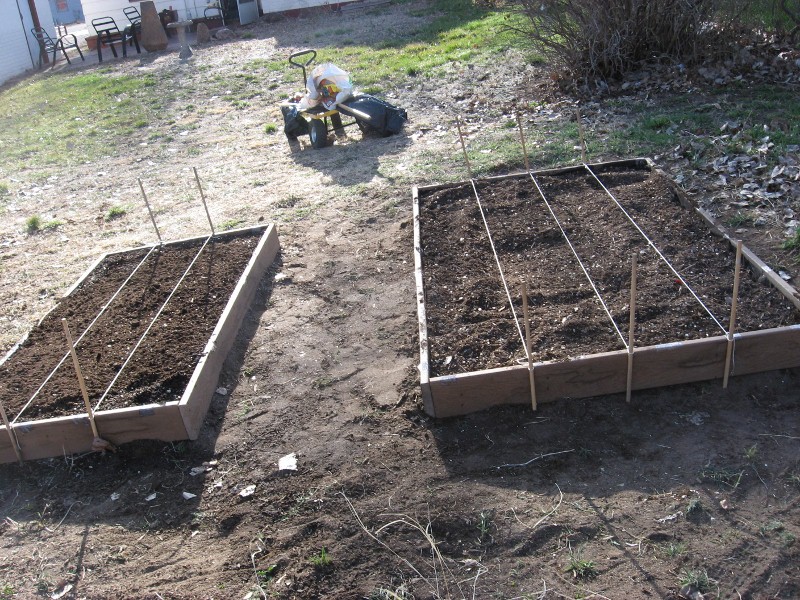 RE: Two beds built and filled

Those are some good looking beds for sure. She's not kidding about the mix soaking up a lot of water. I have yet to see water flow out from the bottom of my boxes after I water every day, but there's no packing of the mix! This is truly a neat way to garden.

You're almost ready to go, and so far it's lookin' good!

Lookin' good, Wyld. Is your grandson half as excited as you are?!

Several posts above got me thinking. No one that I'm aware of has ever measured the amount of water it takes to go from new and dry, to saturated and ready to plant.

Knowing that would also give us the unknown factor mentioned in another thread, how much does a ready to use box weigh!

I've damped them down, but not yet saturated the beds. I'll measure the water that saturates the 6x3 bed tonight... then do the math to find what it would be for a 4x4.

Glad I can help in some small way with people's concerns!

I asked Tal what he wants me to plant... he's all for tomatoes and spinach - and he asked if I could grow kiwifruit. I may give that a try next year in a separate bed, since my research says that it's a vining perennial that grows to about 10 feet - and it is hardy to zone 5, where we are! (His sister Llanya wants NO spinach, lots of tomatoes and strawberries.)

boffer wrote:.....No one that I'm aware of has ever measured the amount of water it takes to go from new and dry, to saturated and ready to plant........Knowing that would also give us the unknown factor mentioned in another thread, how much does a ready to use box weigh!

Hope that's helpful to people out there!

I was curious, as the weight of a box came up in another thread.

Sounds about right to me....now if the bed is filled with mature plants, that will add to the weight as well.

Similar topics
» Finally built my first 4' x 4' bed and filled it.
» Whew! Two beds filled
» Box one is filled with MM..
» New beds are built...
» wooden screen cage built for one of the beds