You may or may not remember I direct sowed a few cauliflower seeds last summer at the time I should have been putting in transplants. (You all encouraged me that I may as well try it, since I had the empty squares and seeds are cheap). Well two of those started heads but they didn't grow more than about an inch before the frosts came. The third one never made a head at all. I never pulled the plants and just watched them to see what would happen. The two with heads got pretty ratty looking and when I cleaned up the garden a few weeks ago, I pulled them out. The third one remained very healthy looking through the whole winter. Here's a picture of it today, all by its lonesome, the last man standing:

I've been peeking inside every now and then since it appeared to be growing now that the weather has warmed up. Look what I found today! 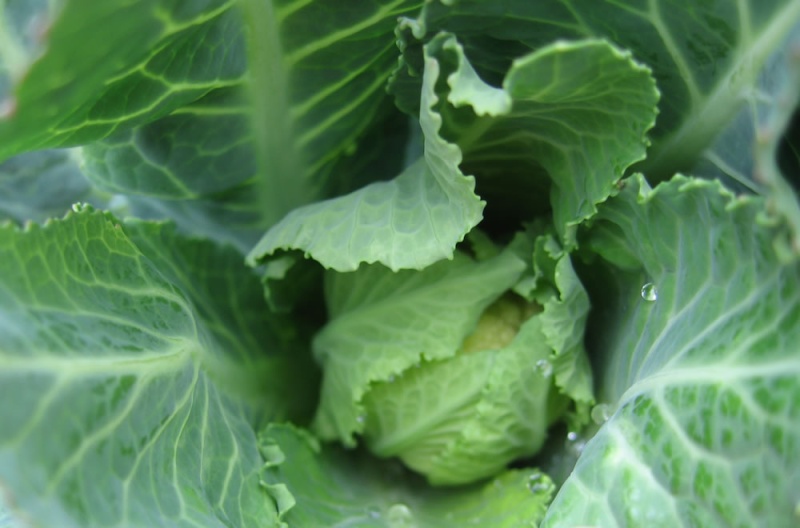 I'm excited to see how big it will grow and if it will be ready to harvest before the cabbage moths show up again.

If the head is still growing and not yet mature and you see your first cabbage moth, just place a square of tulle over the plant. As long as the cabbage moth can't lay eggs right on or next to the cauliflower, you should not have cabbage worms.

Yes, I totally will cover it this time! I'm just really interested to see if having it grow this early means I won't be dealing with those pesky moths.

That cauliflower sure is a beauty. My seedlings just germinated a couple of days ago. In my little corner of the Coast, I'm pretty sure we had Cabbage Moths by late April.

That is about the kewlest thing I've seen today (in honor of the grammies....) You Rock!

gwenifer, congrats on the cauliflower!!!

To all others, where is the best place to purchase the tulle? Do you purchase in bulk? Go to a fabric store or other retail brick-n-mortar, or do you buy online?

Joann's Fabrics and Hancock Fabrics both carry the 108" wide tulle which will fit over the crossed 10 ft hoops or covered wagon style on a 4x4 bed. And yes I usually buy 50 yds at a time. But i have been covering 10 beds. Both store are also an online source. One thing, Joann's always has an online coupon site and frequently runs 1/2 price sales. Be sure you check out the coupons or stop in the store and see what flyers and upcoming special are available. I believe the garden supply and seed companies carry a thin insect cover that will do the same thing if you get the kind that allows a lot of light through.

I am going to try another way of fastening the tulle this year which will allow me to use the 54" wide tulle. Saw in in another post but don't know where and used it for my plastic this winter. one long piece over the hoops in one directions held down with furring strips. The side panels cut to fit over the open sides held at bottom with furring strips and folded down for access. I am using 1" binder clips on 1/2" pvc now to hold in place, but hope to get some greenhouse fabric clips this year 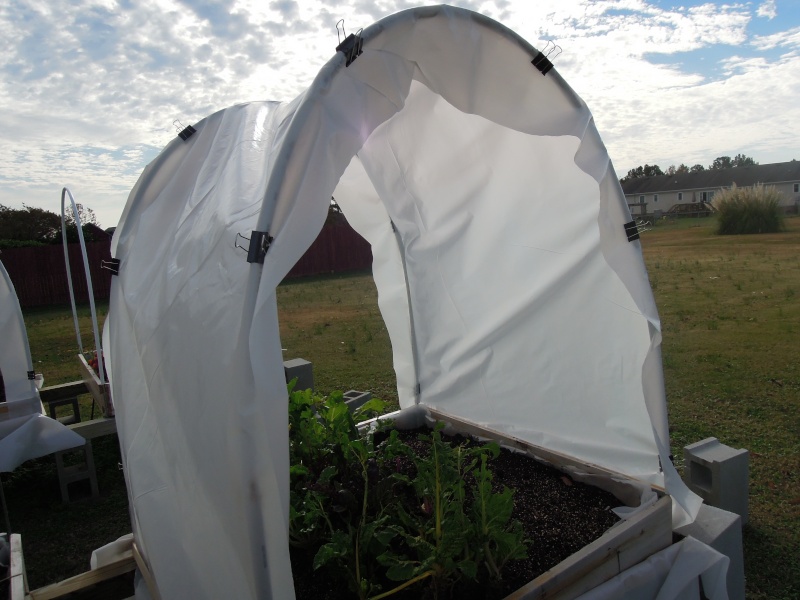 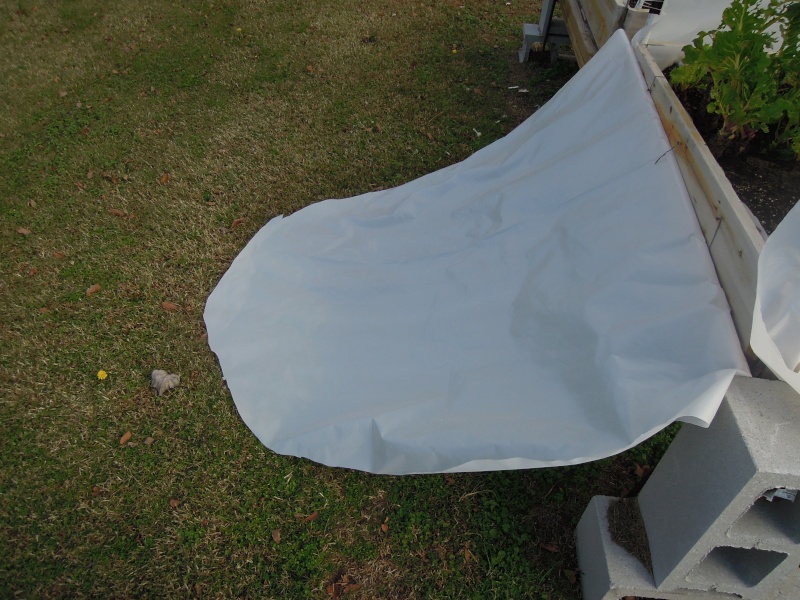 I will use this method for beds that don't have a trellis. Last year I moved the hoops in one square to leave the trellis squares free. Working on a way to cover them too, but haven't got it worked out.

It's a beauty gwennifer! Keep us posted on the progresss.

Here's to the "Last Man Standing"!!

It's interesting the one plant that did not start development of the cauliflower head prior to the first heavy frost did so well to overwinter. That it is now developing the head after going through winter and as it is now approaching spring.

I think it also says something of the two plants that started developing a head and which were not fully developed and harvest-able prior to the first hard frost and onset of winter. You described the two heads to have gotten "pretty ratty looking".

Question: Did those two heads start to develop some "rot"?

In my experience I worked on a row crop farm many many years ago. The farm grew lots and lots cauliflower. Sometimes planted in as much as 5 acre plots. And of course there was some cauliflower still being harvested in late Fall and up to that first hard frost which would be the end of harvest for the year. What I remember is that the heads were more and more susceptible to rot and other problems as the season progressed through the Fall and up to the end of harvest. So your observation about the two that had "headed up" and were getting pretty ratty looking as they continued to develop seems about right to me!!

But I think your observations are telling for anyone who might want to grow an overwintered crop of cauliflower. Based on your observation of your "last man standing", there may be some benefit in "timing" the planting in the late summer so that the crop gets to a decent size (i.e., just before heading up) before they stop growing (or go into a sort of hibernation). You'd have to protect them from freezing over the winter I suppose. Or possibly some of the over wintering varieties are more tolerant of freezing temps (something to look into). I think you will end up with a very nice and very early harvest-able cauliflower by late March or early-mid April.

Please keep us updated on your progress with that "last man standing". And thanks for sharing!!! You have a nice little experiment going there!!!!

Hey dsfin, I like your train of thought on this! So first of all I planted a cauliflower blend. I believe my last man standing is the heirloom variety white 'Snowball Y', since the others listed on the blend are purple and green. (I had tried to sort out the seeds and plant one of each, but apparently failed as one of my other two was also white, with the last one being purple).

The two that developed heads first: yeah, the heads didn't have time to develop fully and began to kinda rot. The purple one tried to flower first, with the head growing taller out of the center and the florets separating. Overall the leaves on these two plants just got less healthy looking as winter wore on. My last man standing has nice, strong, healthy green leaves and did so all winter.

Honestly I was absolutely wondering the same thing about intentionally planting some cauliflower late enough in the year to develop a strong plant that's not ready to flower before it goes into hibernation. Having it ready to begin growing again this early in the year means not having to deal with the cabbabe moth. We'll see though, if the head develops to any size worth trying to repeat!

Ten days later, here's another peek. Surprise! It's not the white 'Snowball Y', it's the 'Green Macerata'! (I knew that plant looked different then the one that grew the white head last fall. I was so confused when it seemed to be white.)

Congratulations I am very happy for you !!!!

Eat your chopped tender cauliflower leaves with chopped garlic, chopped scallions, olive oil, and Tamari sauce or soy sauce tossed together and baked in the oven for 20 minutes uncovered in a roasting pan at 400 degrees F. You'll get some crispy and some tender leaves. This was delicious! Makes me look forward to planting cauliflower again just for the leaves because nobody around here sells the leaves.

Despite the surprise that it turns out to be the "green" colored variety it looks like a very "perfectly" tightly formed head of cauliflower!!! Awesome!!! Cauliflower ready to eat in February!!!

I've only ever grown the "white varieties. With those, especially in late summer or early fall, you have to (or should; not required) keep the head from exposure from the sun. Sun exposure on white cauliflower heads will cause them to turn yellow (less appealing and less marketable). The typical way to protect them is to break and fold over one or two of the inner leaves to shade the head. Another is to use a rubber band (referred to as "banding the cauliflower"). You pull/lean all the leaves to the center over the developing head and apply the rubber band to hold them in place. It's best to do that soon after the head starts to show (1" or 2" in diameter).

So are you going to try it again this coming fall/winter? A full on experiment?

One other thought ....... if it can be done with cauliflower, why not with other brassicas? Also interesting, I just read that some brassicas are annuals and some are biennials. It would I guess make sense if cauliflower is a biennial. The article I read was not specific on which of the brassica genus are annual and which are biennial. I'm sure there is more info out there, but here is the article I checked out < http://en.wikipedia.org/wiki/Brassica >.

@Roseinarosecity, yes cauliflower leaves can be utilized just like broccoli and brussel sprout leaves too. Most people don't know or realize that. The inner leaves on cauliflower are probably the best at the time the plant starts to headup.