» Sixth Year SFG in Canada
by trolleydriver Today at 12:50 pm

» February: What to plant in Northern California and Central Valley areas
by countrynaturals Today at 12:32 pm

» Butterfly Junction
by countrynaturals Today at 11:45 am

» What Have You Picked From Your Garden Today
by countrynaturals Today at 9:44 am

» What are you eating from your garden today?
by countrynaturals Today at 9:40 am

» good plants to plant suggestions
by countrynaturals Today at 9:29 am

» fun Garden vine plants
by sanderson Today at 2:24 am

» How's the Weather Where You're At?
by countrynaturals Yesterday at 6:09 pm

» Hey there, small, hot and composty
by plantoid Yesterday at 1:15 pm

» For The Organic Nerds in Dallas or Houston, Tx area. who want Fungal compost
by has55 Yesterday at 3:15 am

I'm trying something this winter.  I've been using survival blankets in my greenhouse for 2 winters with great success (they keep the warmth in and cold out - when it gets really cold I have a low temp heater running under them to keep the temps up).

So I'm trying some of the lighter weight material I was able to recycle from a local farmer's stone fruit orchard.  They put down a fairy heavy mylar to reflect the sunlight and then gather it up at the end of the year.  I have a fairly large roll and I'm going to cover plants like tomatoes and squash early in the winter when we often get an odd frost that will kill plants that could grow another month or so before our consistent cold period.

Our ground temps stay quite warm all winter since we're only zone 8b, the mylar material should reflect that heat back and hold it in.  *fingers crossed!*

It blocks the light during the day so I have to be sure to remember to uncover as early as is safe.

Oh come on guys ... please stop this. You keep putting new ideas into my head that I have to try.

First it was SFG boxes, then cages and trellises, then all the different things to grow, then composting, then indoor microgreens and now starting plants indoors. And I almost forgot the raised beds on legs which I will probably try next year. And then the possibility of becoming a certified instructor. And now on this thread it's starting seeds indoors. Of course, in my climate it's much too early to do that so it will have to wait until next year.

Mrs Trolleydriver is not going to like this. She already rejected the idea of indoor vermicomposting. Thankfully she has allowed me to grow the microgreens in the front window of the living room. But if this continues I am expecting she will be wanting something very expensive in return.

Mrs Trolleydriver is not going to like this. She already rejected the idea of indoor vermicomposting. Thankfully she has allowed me to grow the microgreens in the front window of the living room. But if this continues I am expecting she will be wanting something very expensive in return.

Sounds like your wife went to the same school mine did...
I told my wife I would buy her a small blower, one that she could handle...whatttt???? she said !!!!
Told me to buy her something from Bailey Banks and Biddle...
I just can't seem to buy anything one cannot use, just to wear???
However to be perfectly honest, I do enjoy eye candy....

TD - It's all addictive.  But it is fun and is keeping this newly retired lady occupied with something I enjoy.

Inspirational video, has! Thanks for sharing! I would love to do a covered garden someday.

Last spring I added a cover to one of my beds, mainly for cool spring reason. It helped lots keeping frost out of the area. Then decided to leave it on for summer, protection against bugs and such. It worked out nicely, lots of cool weather plants came up and flourished, I even planted a few tomato plants, peppers and eggplant. Eggplant did the best of all.
Kept it on during fall also, finally removed the cover to preserve it for next season.
I was able to lift side to open when needed, it was an experiment that I am going to continue. I may do the same on a small bed made for zucchini and cucumbers.
I liked it a lot. so much that it's possible all my beds may have this protection in time...?????? 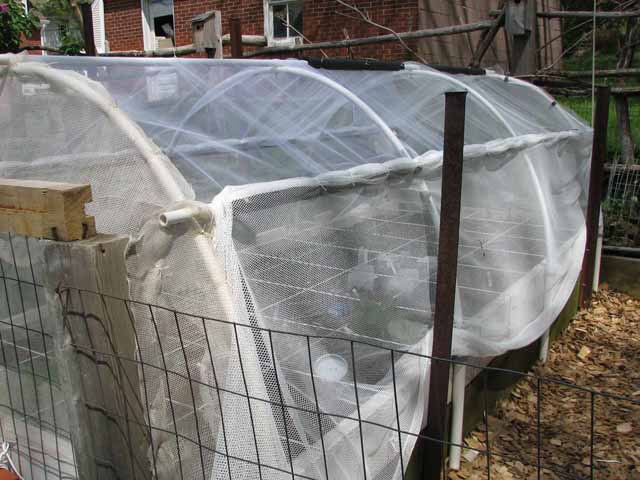 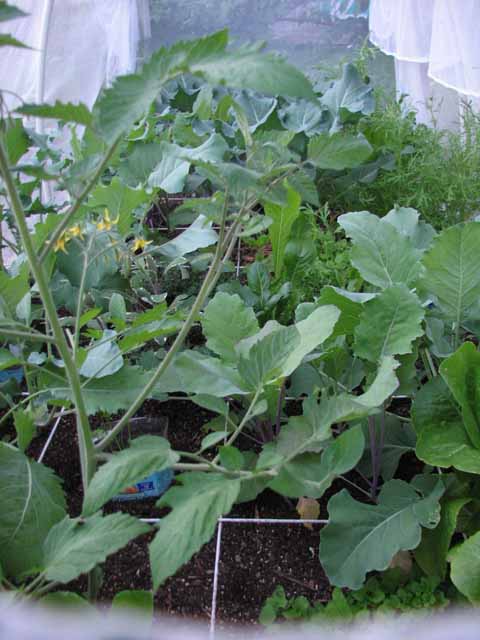 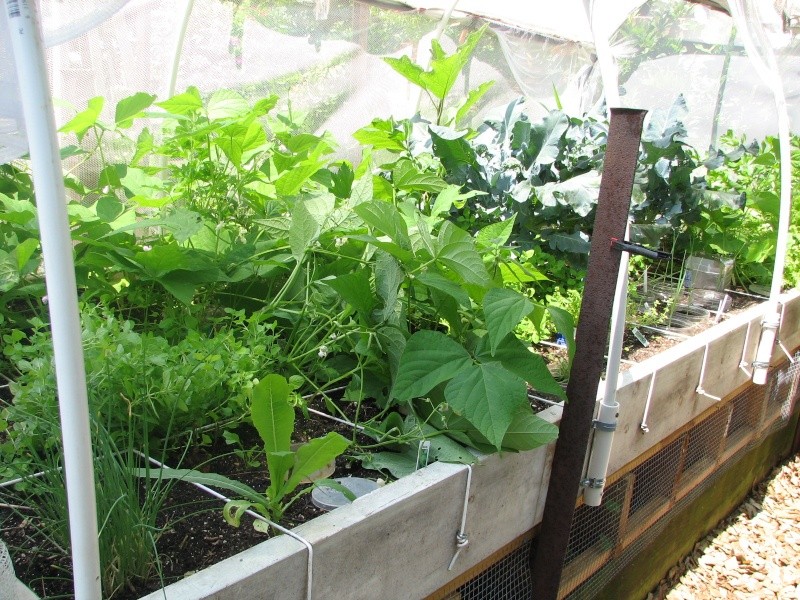 That's what I'm looking at doing, Jimmy!  We're going to do some pricing today.

Jimmy, plastic or fabric? I am jealous!

I used this material for 2 complete seasons, it still looks great.
If you keep checking Joanns site youmight get that 50% off even sale items.

I found this luckily, posted it last year and it was back in my files

And by adding to their web site, sometimes a 50% coupon comes along.

@jimmy cee wrote:I used this material for 2 complete seasons, it still looks great.
If you keep checking Joanns site youmight get that 50% off even sale items.

I found this luckily, posted it last year and it was back in my files

And by adding to their web site, sometimes a 50% coupon comes along.

I followed Jimmy see advice and bought the type of material he suggested. It has held up quite well. I got a seamstress to make it 10 x 10 or 12 x 12 feet for the low hoop beds. I can't remember which size. The ladies recommended I look for Joann's 50% sale, which I did the next day. The material was off 50% and saved quite a bit. Thanks again SFGardeners

Have you ever heard of winter sowing and what's the difference between this and winter growing?

Sheryl Mann the Juicing Gardener has a TON of great videos and you'll want to join her FB page Winter Sowing (Vegetable Gardening with Sheryl Mann).

Thank you. Really enjoy what she had to say.

Thank you for sharing, Kim. I think our spring volunteers in our beds is a type of winter sowing.

Thanks for putting this back on my radar. I tried winter sowing last year, 20 containers, for flowers (including milkweed), mostly because I ran out of room indoors. I used mostly gallon jugs, a few soda containers, and one yogurt container with a lid. About half of the varieties I tried never germinated, and the rest didn't do well - poor germination, poor growth. I think they got too hot, and some dried out while I was away for a week. The small opening didn't let in enough rain/snow, and I found it very difficult to water them through the hole - I was either watering just the center or the water was going down the side and out the bottom. I know I started wet enough because I recall they tried to make a mess of my carpet on their way out.  I didn't like how hard it was to get the ducttape off, and I cut myself on sharp plastic at least once when I was making the containers. I was much happier with the seedlings I started indoors -- but I still encourage people to give winter sowing a try because I know it really works well for some people.

What I do think I will give a try is the direct winter sowing -- aka no transplanting winter sowing via using cloches straight in the garden. My single attempt with a cucumber seed last year didn't work, but one isn't a good sample size. I plan to try it with cucumbers, squash, and carrots. Maybe radishes because it seemed like by the time it was warm enough last year for good germination they were bolting immediately. I'll be using a tent-cloche style setup for a section of peas -- but that's glass (fridge shelves) rather than plastic containers. 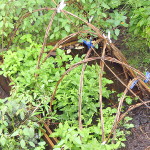 I used water bottles for cloches....they worked last spring, I really planted out too early.  But they acted like cookie cutters and lifted each seedling out when removing them ... 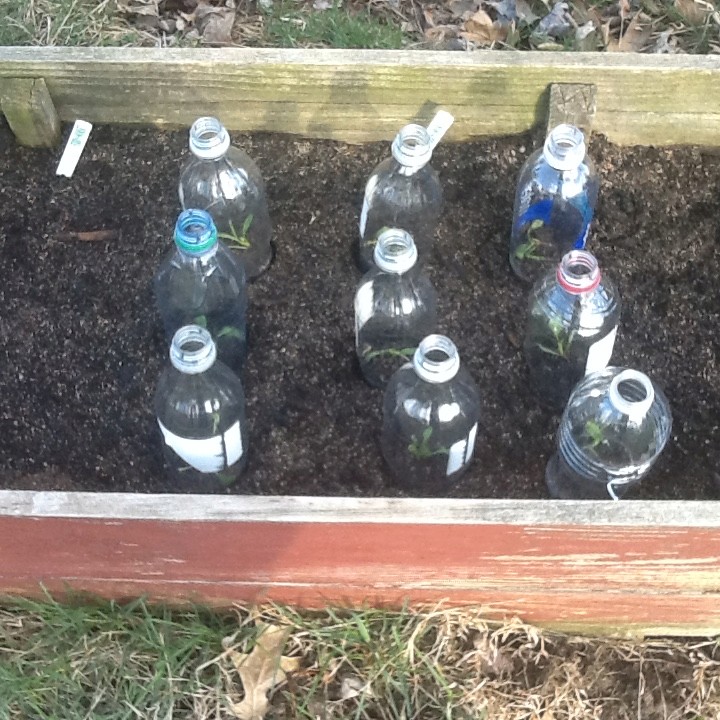 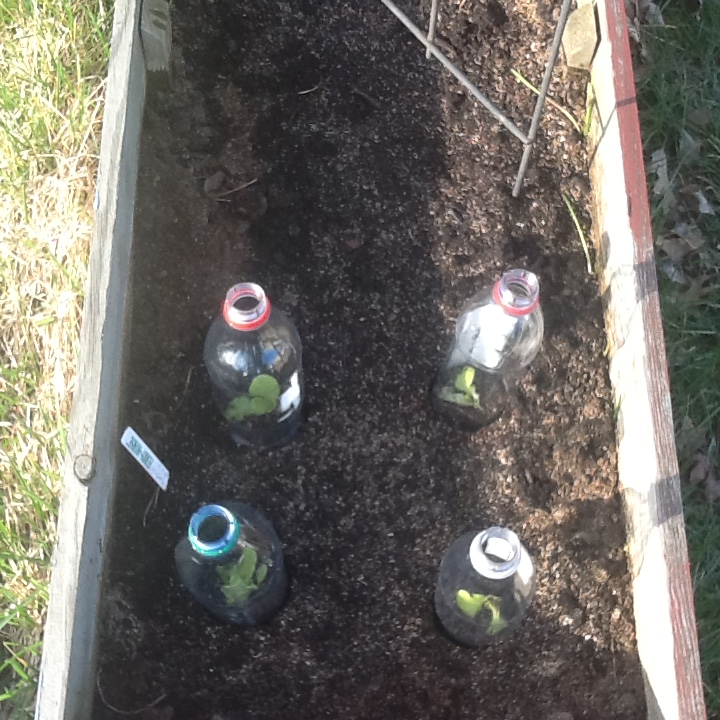 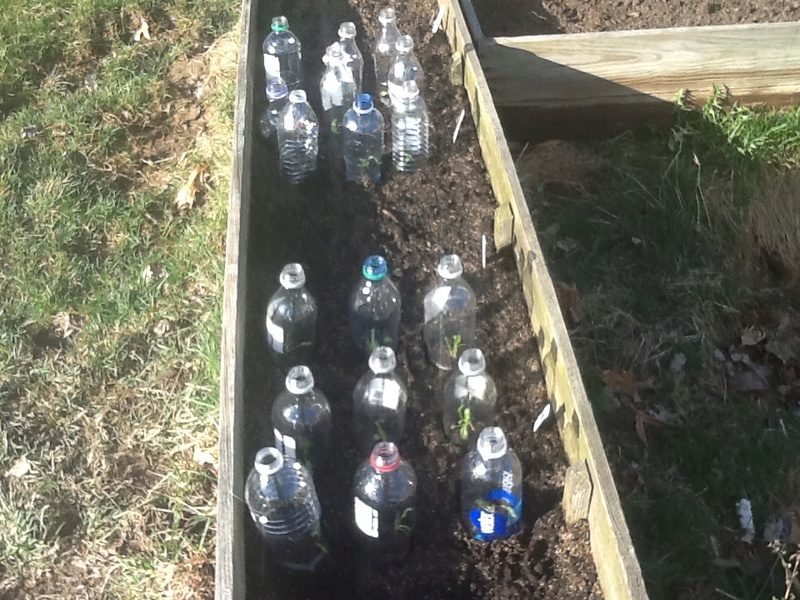 This was spinach and black seeded Simpson lettuce.  All did OK after the trauma of uprooting again...but Ithink it was just too early.  I don't know.

Funny this subject just came up.  I read this article tonight before jumping on the SFG Forum.  http://www.gardening-advice.net/growing-from-seed.html .  Was really interesting.  If I had room I would try it.


She just puts the jugs on her back porch. You could even just put the milk jugs on top of your Mel's Mix in your raised beds.

SR, like your set up/
I posted the lady workstation here. 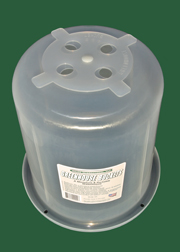 OOOooooo... I LIKE this concept. Looks like it wouldn't pull plants out of the ground when taking them off...

@Scorpio Rising wrote:I used water bottles for cloches....they worked last spring, I really planted out too early.  But they acted like cookie cutters and lifted each seedling out when removing them ...

This was spinach and black seeded Simpson lettuce.  All did OK after the trauma of uprooting again...but Ithink it was just too early.  I don't know.

That's interesting that the plants were uprooted upon removal of the cloche. I wonder if twisting the bottle first would have help. Or did you try that? 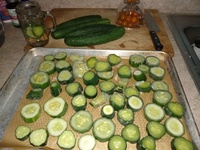 @has55 wrote:Different styles of watering.

Thanks for finding that! It partly confirms this method would be tedious for me to attempt again since I would be stuck with the individually-watering-each-one method.
But what I really don't understand how/why her hose still has water in the winter.

The impression I got from the way my father religiously turned off the water and drained the spigot (and hose) every year before winter was that if you didn't do it, the water would freeze inside and at best ruin your spigot, and at worst explode your pipe and cause water damage inside the house. And that ignores the water freezing into a solid tube inside part of the hose since she has something on the end that blocks water from flowing out... Is her spigot and hose storage actually inside the house or something?

Interesting observation. I agree, my irrigation is cut off till spring, but our temp warms up daily whereas I can uncover the house faucet and water by hand, which I dislike. Right now it 69 degrees. I don't know anything about Ohio. I also think the method is tedious, but the gain of having the plants develop early is very tempting. I loved SR setup. I'm looking at the greenhouse for my summer crops ( tomatoes, loved peppers) to beat texas heat. I love to get more tomatoes. I dislike the cold the north have, but I also see the beauty in it. I envy at the idea you can have tomatoes and peppers all summer