January Avatar: 'Tis The Season! (click this)
Welcome to the Official SFG Forum
!!! Happy Gardening in 2020 !!!
Search
Latest topics
» TD - A Journey Through Prostate Cancer
by donnainzone5 Today at 6:36 pm

» What are you eating from your garden today?
by OhioGardener Today at 6:11 pm

Thanks, Hass55!  It worked wonderfully well, with two minor problems that I will correct before the next batch: 1) The mesh bag stretched out during the brewing process and sat down onto the air pipes, which limited the air from those holes; and 2) The small drain valve I put on the tank quickly plugged with the sediment when I was draining the tank into the watering can.  Both of those are easily corrected, though.

It rained yesterday and last evening, so I left the compost tea brewing until early this morning, before the sun came up, to apply it to the gardens. The compost tea appeared well developed, with a sweet earthy smell and a small foamy covering. I used the 12 gallons of the tea for foliar spray for some of the vegetables, and as soil drench on all of the gardens. I even gave the new Rhubarb beds their first drink of Compost Tea. The rain last night should help it to be absorbed into the soil.

An unintended consequence of the design of this compost tea brewer was that I used garden hose fittings on the pipe going into the brewer and on the 1/2" plastic tube from the air pump. It made connecting and disconnecting the pump very easy.  But, while cleaning the tank after emptying it, I discovered that I could connect the water hose to the brewer air pipe and use the water pressure to flush out the air pipes - it quickly ejected all of the compost tea sediment from the pipes and made cleaning the tank much easier. That was not intentional, but it was a great benefit.

I don't know that I would change anything with the design of this Compost Tea Brewer.
Here's to Compost Tea!

Not sure if this will work, but I wanted to experiment with posting a video. This is the Compost Tea Brewer at work just after the bag was inserted and before it began foaming. The brewer has good turbulence from the air pump and produced good earthy smelling tea.  If it is successful, the video of it at work should be at this link:  Compost Tea Brewer

Thanks, OG.  I posted your shared youtube link here so we can see it. It's easier.

Thanks, Has55! How did you post that link to put the video on the page?

I made the final mod to the brewer tank today to ensure the spigot would not plug up when I am draining the compost tea out of the tank.  I had previously used a regular faucet, which had a very small internal opening.  I replaced that with a 1/2" PVC ball valve, into a 3/4" male hose fitting - the smallest opening in the drain now is 1/2", so it is much less likely the sediment in the compost tea will be able to plug it up.   I'll soon be making another batch of tea, which will test both keeping the strainer bag off of the air pipes, and the drain when it is done.  This brewer is such an improvement over the 5 gallon bucket with an air stone, and I am sure the microbes enjoy it. 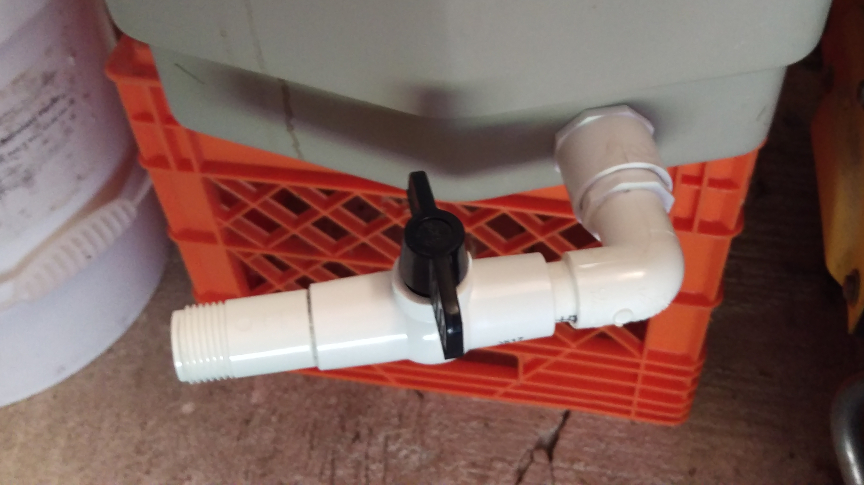 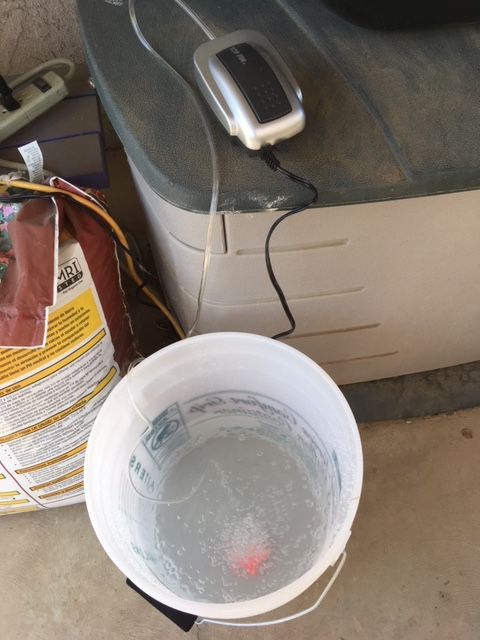 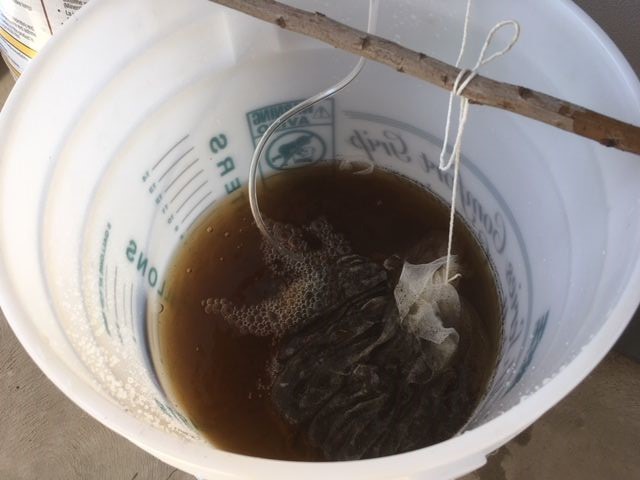 @sanderson wrote:I did it!  I finally bought an air pump to make compost tea.  I'm only making 2 gallons as I can't lift the 5-gallon bucket (food grade) if it's too full.

Questions: 1.  I'm going to make a compost bag - do I use costume tulle or bridal tulle?  2.  To prevent clogging the spray bottle, what do you use for straining?  3.  If I use 2 large handful of homemade compost to 2 gallons of chlorine free water, can I use it full strength or should it be diluted?  TYIA

5 gallon buckets are easier to work with. When finished just use another container to scoop out a portion of the tea.

Bags to use ? I had excellent results with a one gallon paint strainer for Lowes, in expensive, can be cleaned nicely after allowing to dry, use over and over again. I add about a quart of compost. When using this bag nothing needs to be strained, however microbe activity in not impaired. Bubbles should be a gentle as possible and many, turbulence is not a good thing. Microbes are very sensitive, especially fungi which are extremely fragile.
No dilution is necessary in compost tea application dilution is used to make tea go further. Also compost tea may be applied as much as desired.

The first batch of Compost Tea is brewing after modifying the compost bag so that it stays off the air tubes on the bottom of the tank.  The Compost Tea is looking much better with the improved system. 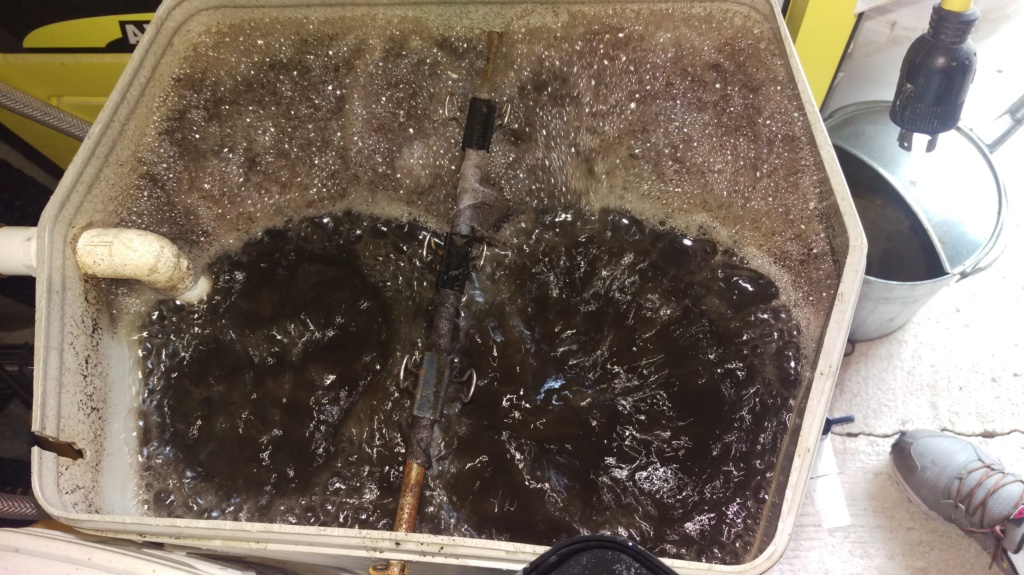 A short video of the brewing in action: Compost Tea Brewing

this was a good trial to Japanese indigo from compost tea application. It had some more things added, but still good to see the results on the plants

This one is right up our alley. some farms, but mostly what we do with our vegetable.
biological regeneration

No, I didn't see any way to add that link, so haven't figured it out yet.

@has55 wrote:This one is right up our alley. some farms, but mostly what we do with our vegetable.
biological regeneration

This is an excellent report on the differences with synthetic/chemical fertilizers vs natural/organic foods - it is a difference in feeding the plants vs feeding the soil. In 60+ years of organic farming & gardening, I have witnessed these differences many, many times.  Thanks for posting!

These Sweet Banana Peppers are a good example of the results of Compost Tea Foliar Spray.  There are 18 peppers (6 each of Banana, Jalapeno, and Bell) in this bed, each with 1 square of soil.  They were suffering from the long hot, dry season we had. They were watered regularly with drip irrigation, but they quit setting blooms and did not have any new growth, and the leaves were yellowing. I started a foliar spray of compost tea on them. After the 3rd application of compost tea spray they are now thriving and producing more peppers than we can use. They have grown to about 3' tall, and very strong plants. 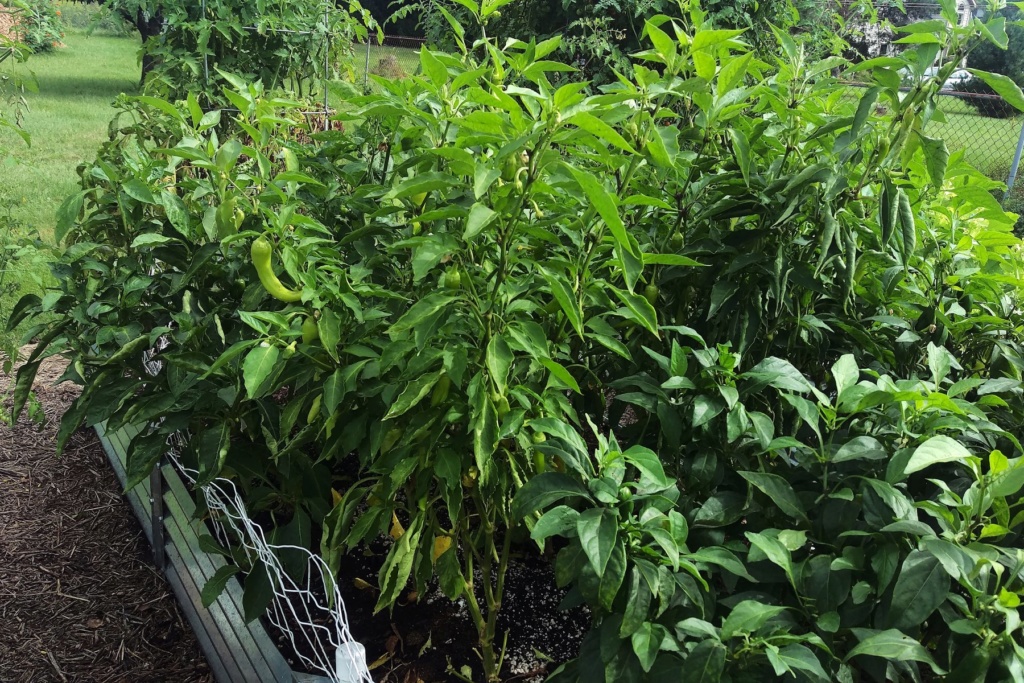 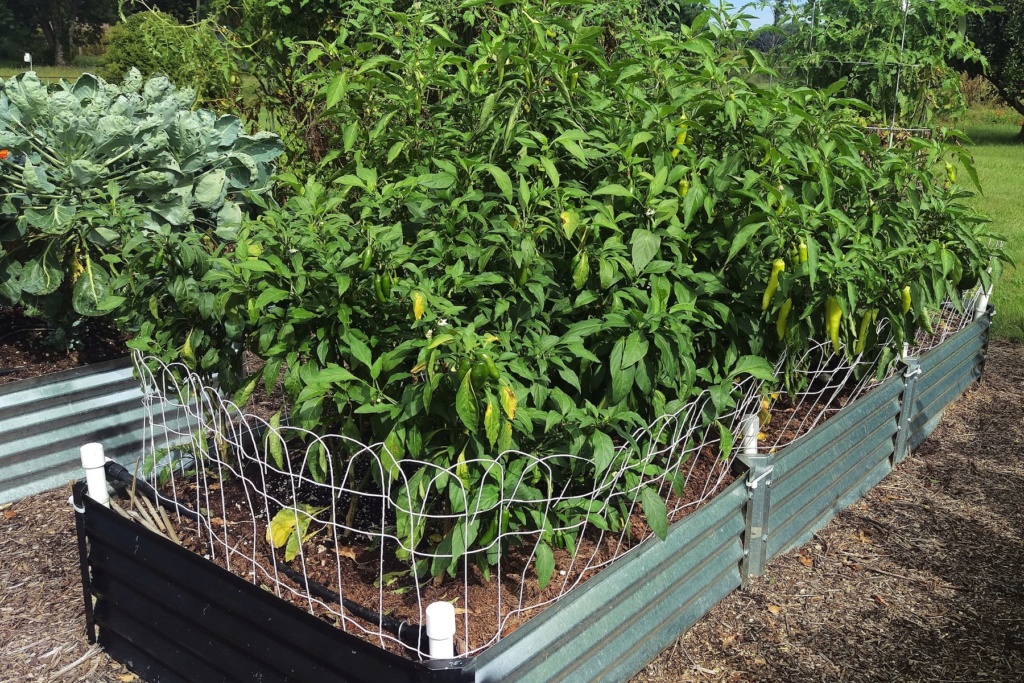 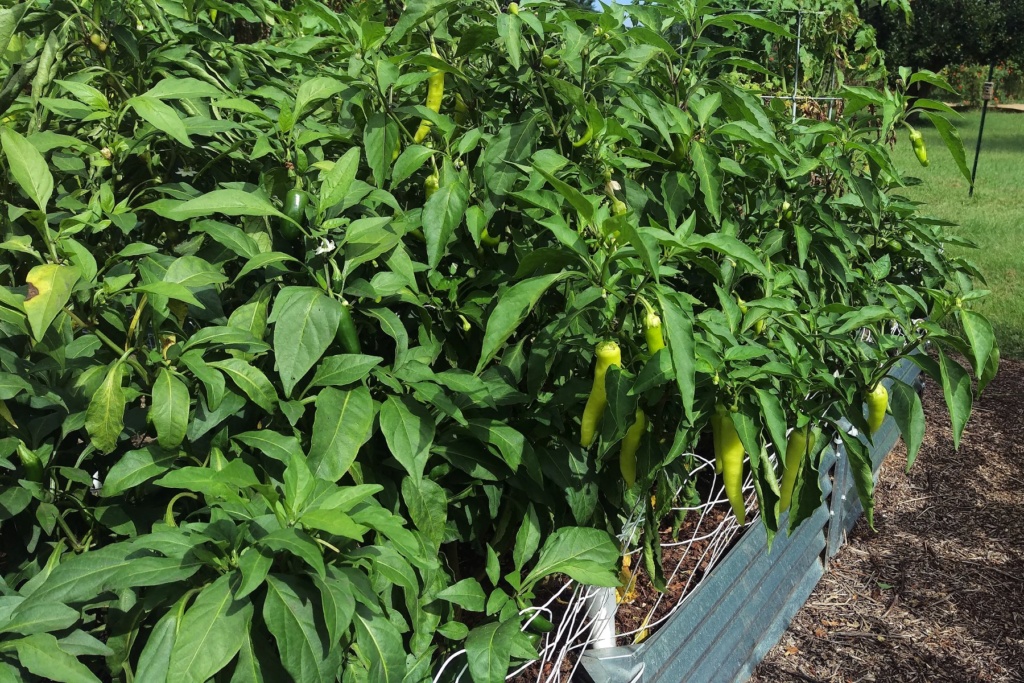 
No, I didn't see any way to add that link, so haven't figured it out yet.

Here you are sir, 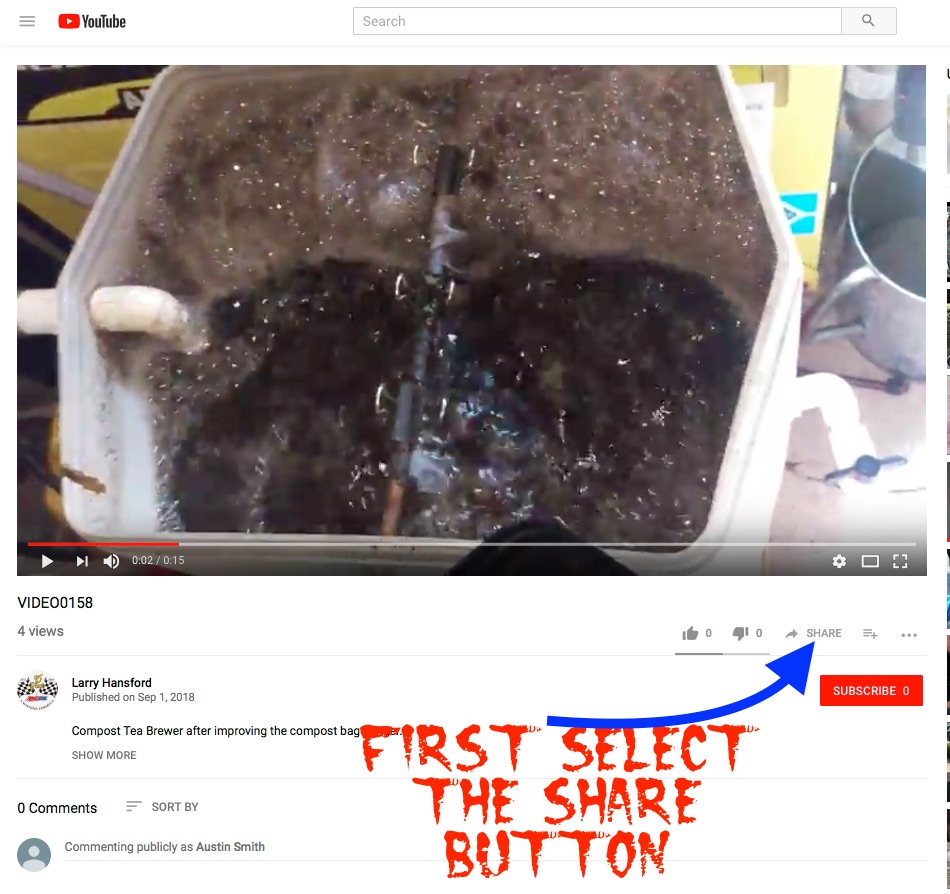 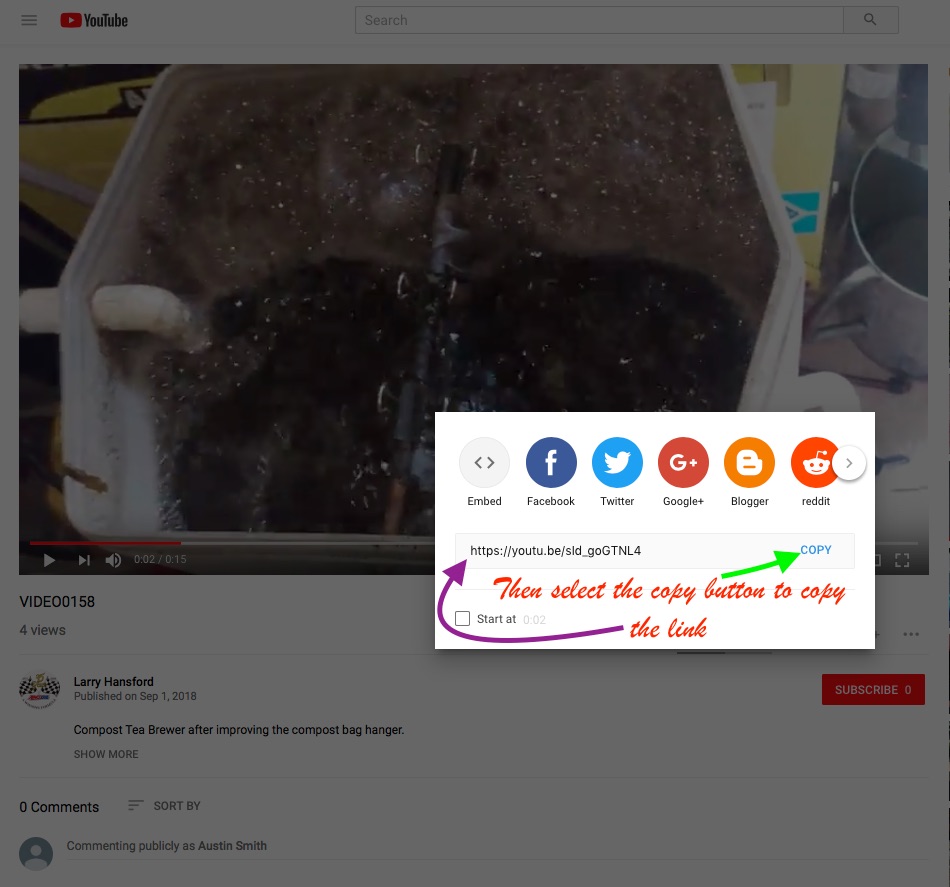 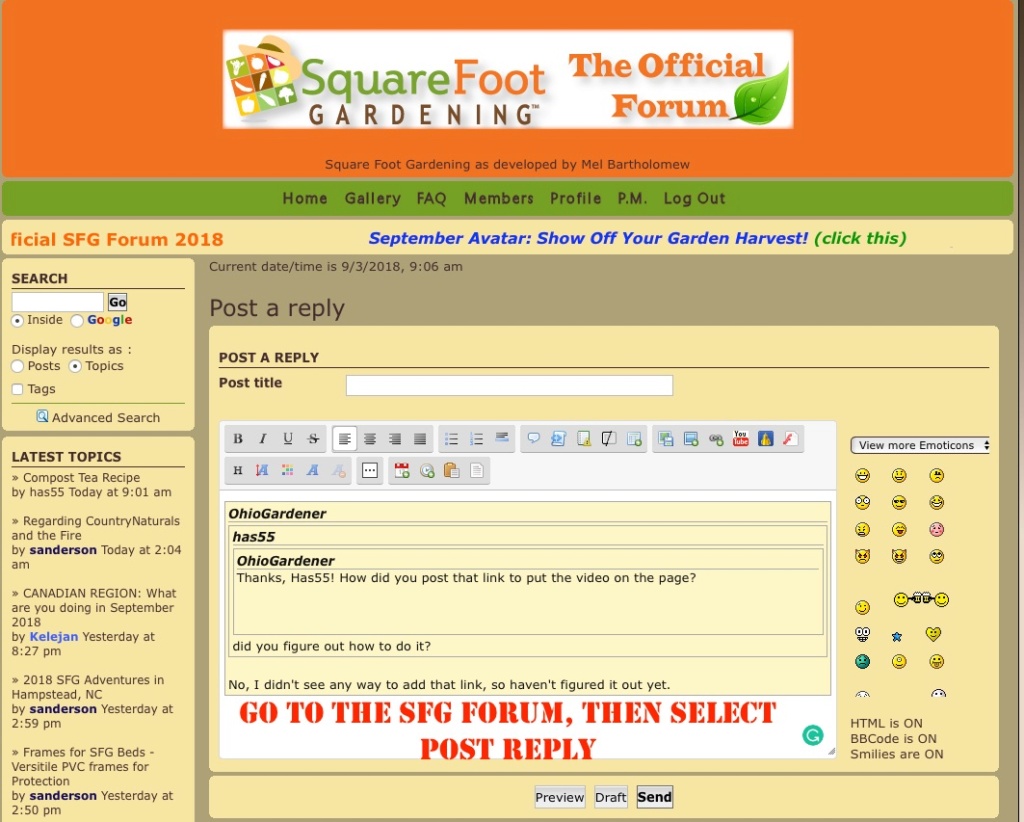 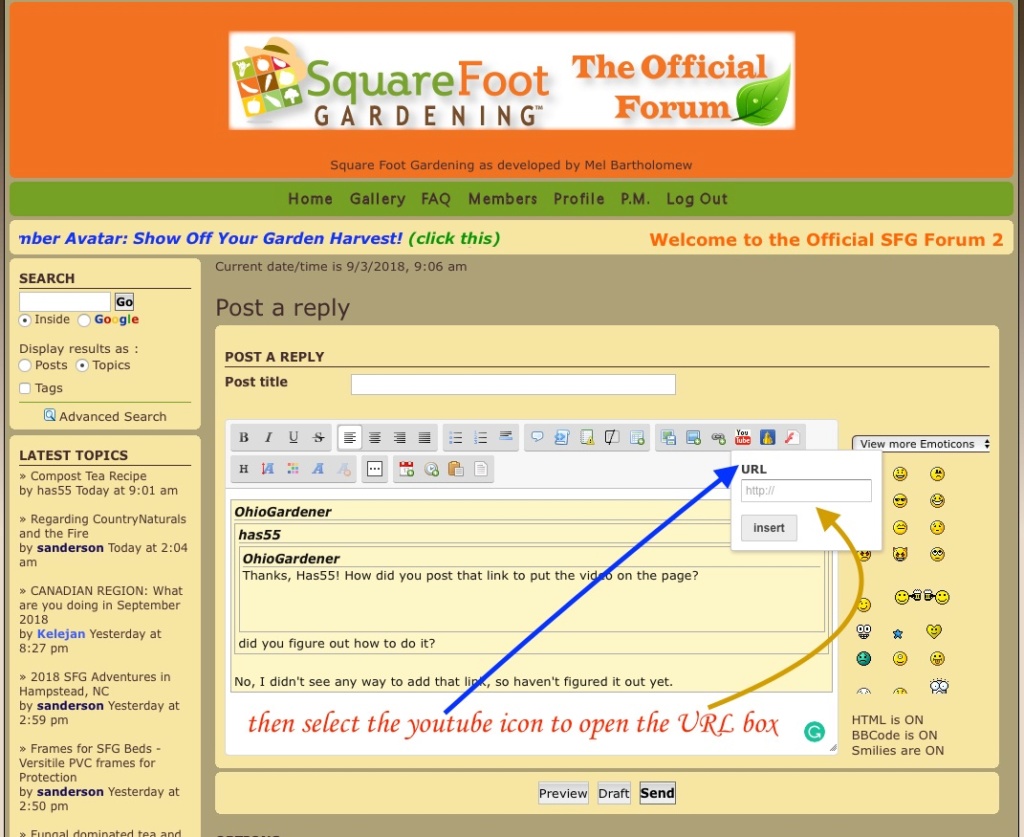 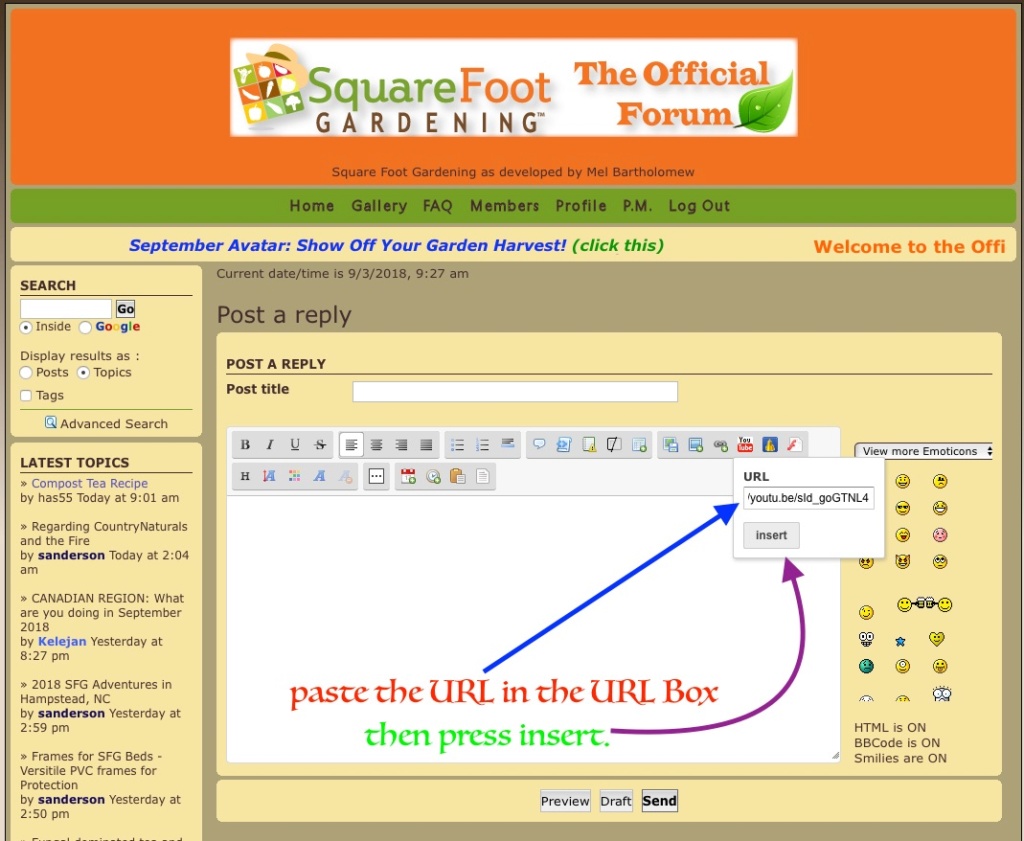 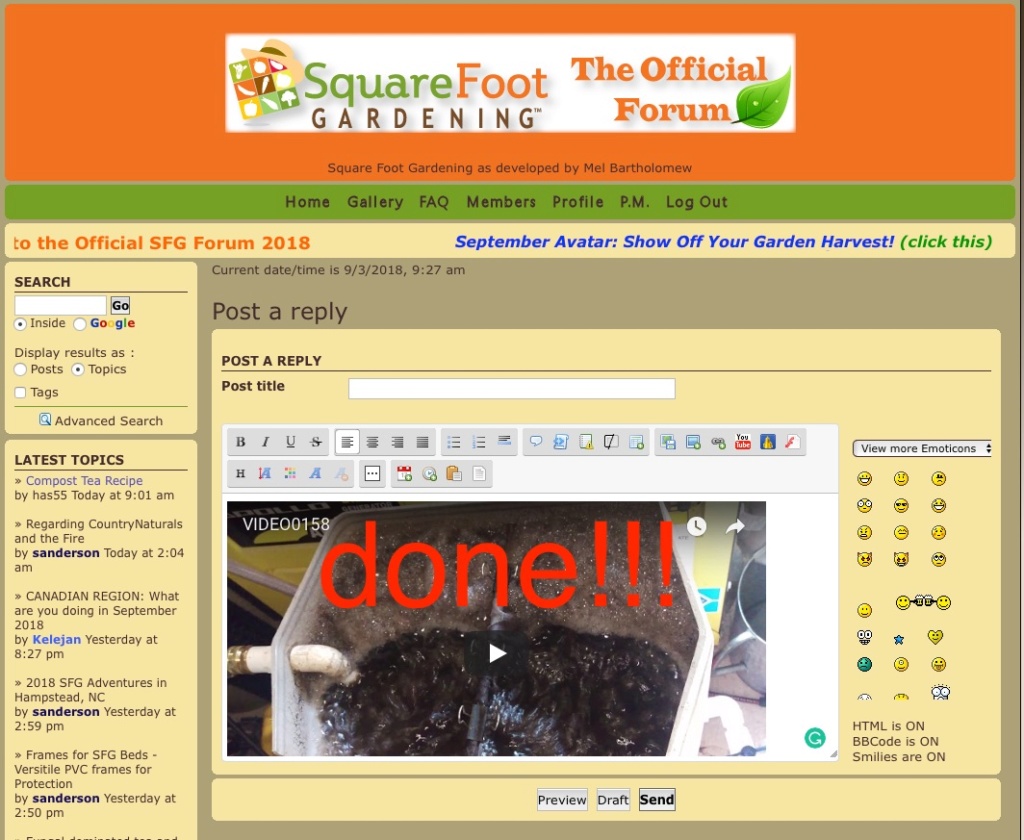 Many Thanks, Has55!  I'll keep those notes.  It seems pretty simple now that you explained it in detail.

Has, would you post your wonderful instructions for posting a video? Go to How to Do Things on the forum. New Topic "How to Post a Video"

OG, have you notice any other reduction in specific insect pest or disease besides powdery mildew since you started applying compost tea?
How long have you been applying compost tea?
I did not put down any compost tea or compost this year and noticed a significant attack of disease on my cucumbers and watermelons. They were wipe out. I was able to save the peppers with actinovate organic fungicide. Last year I had a great abundance of food. I'm starting the compost tea prep for the fall and winter garden hopefully later on this week. Too many projects, here and on the new business adventure in staffing healthcare.

@sanderson wrote:Has, would you post your wonderful instructions for posting a video?  Go to How to Do Things on the forum.  New Topic "How to Post a Video"

alas, sad to say, I deleted those videos after making sure it posted to the forum. I'm running out of space due to videos and music and need to move my iTunes library to an external drive. I have about 25GB left on a 1 TB drive. I trying to make sure my iMac doesn't lock up. I have the empty drives to export the data but have not made it a priority.