I need greens! Can I ask a flower shop for their greens? Or does anybody know if they are imported with pesticides. This is the flower shop that makes my mom's bouquets and my daughter's prom corsage. I just saw this morning that they were dumping a 32 gallon trash can of greens. It seems a shame when I desperately need greens.

I have a feeling that I would stay far away from that stuff, but you could always discuss it with your florist and see what they say is in/on it.

I used to clear up the graveyard in my local church policy was that after three weeks of someone being interred we removed all placed wreathes that has died off.

There was a massive pile of rotting wreaths and flowers including those that came out of the church .

Once I'd put a fork through it to take out the wires and card holders etc then put it all through a sieve it made some fantastic compost , not only for the yew trees in the church yard (650 yrs old church ) it also helped to grow some decent veg in the vicars & my garden .

Mel gives a suggestion in his book to use as varied a compost base as you can get because of the differences in nutrients released when it breaks down as compost .
I doubt that any of the insecticidal residues etc will be residual or particularly toxic as the florists chains will have to have some legislated traceability on such things .

Before I retired I used to have regular visits to a massive fruit ,flower and veg import company here in th UK .

They were really hot on what was put on all their imports and locally sourced stuff . They had a 24 /7 lab for doing all sorts of chemical evidence tests and product quality assessments.
I suspect it will be the same for you.

Many florist shops import from other countries. I wouldn't trust it, either. 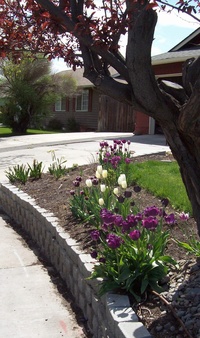 I would hate to see such a find go to waste myself. I am on the fence on this one regarding pesticides, etc., but it wouldn't hurt to ask where they get their flowers. I have chopped up old flowers for the compost pile. I do some thinking and then go by my gut feelings on things like this.