Hi there, we live in Scarborough, Ontario and just built our first SFG this past weekend! It is an 8' x 4' blank canvas that I can't wait to get into.

However, we have lots of hungry raccoons and skunks here that would love to destroy my vegetable garden once it gets going.

What is the best way to keep them out?

I am thinking a 2' metal chicken wire fence enclosing the whole garden, with netting overtop. I will have to enclose the vertical support at the end as well, where
the tomatoes and cucumbers will be. Is the netting overtop enough to keep them out?

My concern is - how do I keep animals out while being able to easily access and work in the garden? Is the only choice to remove the metal fencing each day I'm working in the garden, and put it back when I'm done?

Would love to hear any ideas! Thanks.

This is what i did, and I have many critters like you are describing: 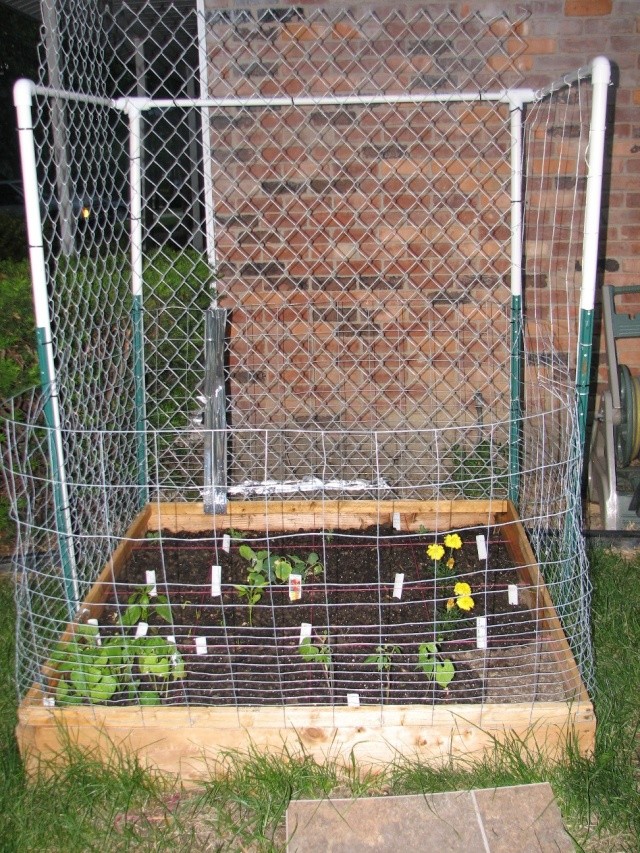 basically an open top version of the cages described in the book. I used rabbit fencing

Thanks, that's great, I love the photo as it gives me ideas for what we can do. Hmmm rabbit fencing.

Do you not find it hard to get in there and work? Or is that just the way it has to be!?

It was a PITA, especially when the plants were little, but as they grew it was easier. Also, since the larger holes are at the top, I could reach in. by the end of the season the top of the wire is crunched down a little, but no big deal. I rather deal with that over the family of ground hogs, skunks, opossum, and other rodents.

Having lived in the area (Toronto and Bowmanville) I have to say its highly doubtful you'll get racoons and the like digging up your beds, but way more likely you'll get neighbourhood cats digging them up! (and pooping in them). I battle my barn cats daily over this to the point where now I've put plastic hardware cloth over my beds with young seedlings in them LOL.

What I find is cheap and easy to work with is plastic hardware cloth, Home Depot and Canadian Tire carry this stuff and you just staple gun it to the beds. Much easier to work with than Chicken Wire. I battle on a daily basis my chickens, they dust bath and dig up my beds so we've built little fences of hardware cloth around the beds until the plants are big enough.

Thanks for this, very helpful. We just installed chicken wire And netting today. I'll look into the hardware cloth. The thing is, we do have raccoons and skunks here, we see them every night!

And until we put the fence up today, yep our cats thought we had built a giant litterbox just for them!

Oh no doubt you have racoons and skunks, but they're usually more interested in eating things that are easier and smell nicer, like your garbage.

@LupinFarm wrote:Having lived in the area (Toronto and Bowmanville) I've put plastic hardware cloth over my beds with young seedlings in them LOL.

Do you have a photo of this hardware cloth? I've never heard of it before.

Re: Keeping Animals Out! 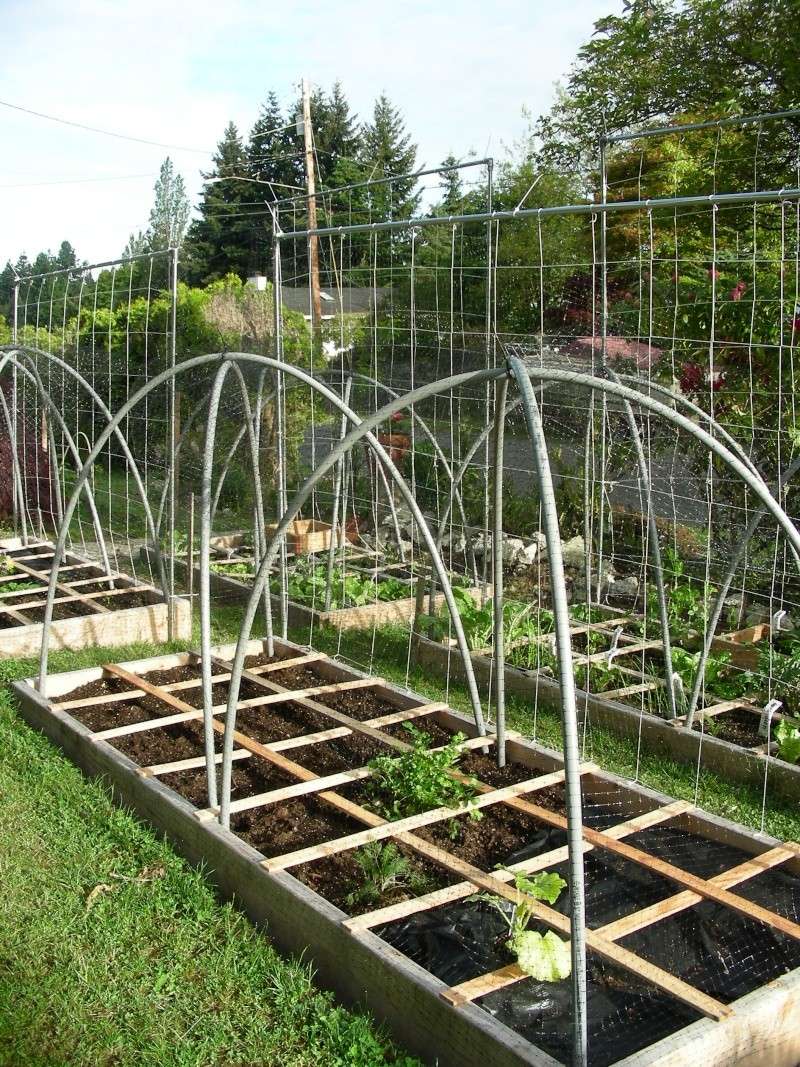 Here is another idea that I am using in the Seattle WA area. I bought 10-foot PVC 1/2" pipes and criss-crossed them in each 4 foot area. I used zip-ties to connect each 2 crossing pipes at the top. Then I bought a roll of fine black plastic deer fencing (7' tall and about 100' in a package). I stapled the deer fencing around the bottom of each bed and then connected the two cut ends together with twist-ties.

When I want to work in the bed, I just push the netting down around the bottom like scrunching down a sock! When I'm done, I pull up the 7' netting tall, and hook it over the ends of the zip-ties at the top of the crossing pipes, and the beds are completely enclosed!

I haven't had any intruders except those #@*% slugs! The PVC pipes are less than a dollar each, and one roll of deer netting was about $20 and did 4 of my beds, so the whole deal is pretty inexpensive. I just need to talk to my lawn-boy (son) about weed-eating too closely to the netting around the bottoms of the beds and cutting it!

I hope this helps! 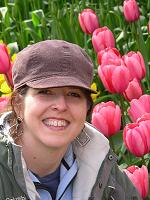 P.S. A nice thing about this method is that the deer netting is virtually invisible from a distance, and you can enjoy seeing your garden through it!

P.S. A nice thing about this method is that the deer netting is
virtually invisible from a distance, and you can enjoy seeing your
garden through it!

Beautiful set up !! So nice that it seems clear like you said you can see your garden. I almost didnt see it in the pictures

Wow! That's quite a set up.

Have any of you tried the P*ss off plant? It is supposed to deter dogs, cats, and rabbits from your garden. I found it on the Richters site I'm thinking about trying it but wondered if anyone here had heard of it.

@Rolanaj wrote:Have any of you tried the P*ss off plant? It is supposed to deter dogs, cats, and rabbits from your garden. I found it on the Richters site I'm thinking about trying it but wondered if anyone here had heard of it.

I believe that the notion that this plant repels animals is purely anecdotal. It is a member of the mint family and is native to subtropical regions, thus it would do best in a container and if you live north of zone 10 it will not be hardy to survive cold weather. However, with this plant I myself have no direct experience.

I planted catnip in pots last year, and placed the pots directly adjacent to my SFG beds. The intention was companion planting. What turned out to be the greatest effect, though, was it kept the feral cats IN my yard and OUT of my beds! I had to upright those pots almost every morning (I'd wake up to discover them knocked over) but very, very little digging in my beds.

After a recent snowstorm (if you want to call it a storm) my husband and I noticed that cats STILL frequent our yard, long after the catnip is gone. Hundreds of kitty footprints all over in the snow, and only in our yard. I consider this to be a good thing, as this area has a rat problem, but we've not had any trouble.

You could always attach your hardware cloth to the left and right poles and join them in the middle with twists of wire or ties, overlapping them a bit.
They would serve like barn doors and you could open them when you were working in the garden and close them the rest of the time.

Hi! I don't know if this was mentioned, but I had a problem with rabbits last year eating my lettuce and other plants. I got so fed up with it and did some research. I found that human hair is a good deterrent, because is an enemy smell and the animals will stay away. I found that as soon as I put the hair around each square and between the plants I had no problems anymore. So save your hair next time you have a hair cut and spread it in your garden. It is also an excellent fertilizer, so you can't go wrong!

I have a large lilac hedge that runs the width of the backyard, it is more than six feet high now, it also runs across the back of the garden area. I get lots of deer in the rest of the yard, but not in that area. This year I want to plant some blackberry and raspberry bushes on the one side that does not have lilacs.

i made a frame that i lift up when i need to work. the net is vinyl and so far it works good. Very light. I know i will have to figure out a different way once they start getting bigger. I am a first time gardener.

I too am a first time SFGer in Hamilton. My first round of planting was promptly dug up by coon (definitely in my area) and/or skunks. I immediately bought 3' chicken wire and bird netting to surround my SFG (now affectionately known as "GAarden Alcatraz"! No trouble since installing it. I can easily water through everything and i just twist-tied the wire to some stakes. I takes just a few minutes to unhook and rehook each time you go in. Well worth it when you see your plants growing undisturbed.

Deer netting (was: Keeping animals out)

Can this deer-netting system be used with beds that have a vine lattice for tomatoes or peppers?

After looking at the photos from earlier in this thread, I’m imagining a setup where the lattice straddles the center line of the garden grid.  A trio of PVC arches would be placed over the bed, with the lattice supporting the arches at their highest point.  The deer netting would then be draped on all four sides.  Once the netting is in place, it would look somewhat like a small Quonset hut with transparent walls.  The netting could be permanently attached at either the top of the arch, or at the bottom to the actual box, and held in place using hooks at the opposite end.  When working on the bed, the netting could be rolled up or down, like a curtain. This is not unlike what an earlier poster did with their “teepee” style arches, and rolling the netting like a sock.  The Quonset-hut style structure could also be used to support a tarp during those times when severe summer rain and autumn frost are a concern.

This design exists only in my head, and I'm thinking as I go.  Has anyone ever tried something like this?  I suspect I'm re-inventing the wheel.  Still, I'm wondering if this would be a cost-effective alternative to a fence.  I had some problems with critters this year, so next season I’ll be upping the security.

Hi RJPugh and Welcome.  I'm just up the road from you in Manassas.

While we only see an occasional deer in town, your idea of placing deer fencing around the bed should work.

At another location where deer are a problem, I've used 4 ft plastic deer net to surround a 3 ft deep area that is maybe 20 ft long.  Not enough space for the animal to have a good landing spot and they seem to be afraid of the closeness.

Give them an 8ft space and they would eat everything in sight. 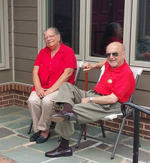