Okay, so this is FAR TOO EARLY to seriously consider...

Unless you are still in the cold and maybe experencing it now!

Has anyone successfully grown tomatoes not in summer? Fruits, not just plants!

I noticed one comm gardener had a winter tomato growing. I never had a taste so I can't report. They were small (3 fingers held down with your thumb).

Which tomatoes do well outside of summer? 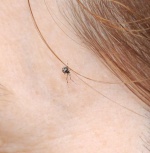 Until we moved to FL I always said I wanted a heated conservatory so that I could grow things year-round. It would still be nice to have something that I could at least grow tomatoes in, as I love my lettuce & tomato sandwiches, but NOT with those grainy, bland, scary store-bought types.

Here's hoping someone here has some experience with it!

Re: Off season tomatoes

Yes - I grow tomatoes outside most of the year. This year I harvested over 100 tomatoes between January 1 and March 31 from plants I started in August.

In my area, there's a short time in summer when it gets too hot for the tomatoes to set fruit, and a short time in winter when they also don't set new fruit and I have to finish ripening the existing tomatoes on the counter, but the rest of the time they're productive. (This year they started to set new blossoms in early February, if the winter had been cooler, it would have been a little later.)

I grow my tomatoes outside in an unheated plastic-covered framework (like an extra tall hoop house) that I can vent when then inside temperate gets too warm and close when the temperature drops. Every night during the winter plus when the temperatures drop to freezing I also cover the tomatoes tightly with a frost blanket inside the plastic. I'm on the border of zone 7b/8a so my winter should be cooler than yours.

What really makes this possible however, is our LONG hours of sunlight in winter. Because I have some control over the temperature, and the days are relatively long where I live, the tomatoes continue to grow, although very slowly, all winter. When the tomatoes get to the "grey green" stage, they will ripen perfectly on the counter.

I suggest you take a look at Elliot Coleman's books about harvesting year round. I felt that "if he can do it in Maine, I could certainly do it in Texas!

Hi Gloria
That is so encouraging that you can grow them all year round.
That is my goal and I am currently planting varietals that are good greenhouse plants.
I have all three of Eliot Colemans books, and in fact in moving back to Canada, had a choice of several places to move to, but chose somewhere that had the same zoning as Coleman zone 5a.
Before I moved here (in Oregon zone 7) I was able to bring my tomatoes into the greenhouse in the fall and was getting them to flower and so was very hopeful (then I moved)
Perhaps I need to go back to his books, but did he actually say he harvested tomatoes in the winter? I thought he just harvested them into the fall and did cold weather crops in January.
However I stand to be corrected and to be honest REALLY HOPE to be corrected.... PLEASE CORRECT ME

I have read and reread every word he wrote about how he grew the tomatoes up the strings and then laid them down clipped off the lower branches and continued growing them upwards.
I have a hoop house and a greenhouse and am going to make an effort to grow tomatoes next winter.

Gloria, that is great!

Do you use a summer based tomato? Or is it a special one for winter?

Re: Off season tomatoes

You're right, Eliot Coleman's books DO refer to over wintering cool-weather crops in unheated hoop-houses, but he's in plant hardiness zone 5a, a cold, short day-length winter area.

In my 8a zone of Texas our winter temperatures generally don't stay below freezing for more than a day or two at a time. In addition, because of our latitude, we have about 10-hours of daylight in winter - well over an hour more than Mr. Coleman does. Our sunlight is also more intense (because of the angle of the sun's rays) and we don't have very many inclement days. That made me realize that with a little extra care, I could probably use Eliot Coleman's concepts to overwinter warm season crops like tomatoes.

Because of their locations, I believe the same should hold true for AvaDGardner who is in California 10b and givvmistamps in Florida 8b.

I don't have direct experience with overwintering warm season crops as far north as British Colombia zone 5b so I'm not sure, but I believe that you will have to grow your tomatoes in your heated/lighted greenhouse.

For winter, I've been growing medium sized tomatoes like Ramapo and Rutgers - ones that do well in northern areas. These seem to withstand the cooler temperatures better and still set fruit on warm winter days. (Just remember to shake the plant to pollinate.)

This conversation is making me think and wonder...

Another thing I thought of is...since heat rises...if you put a 4' square box on a table and set up a composting operation UNDER the table, then built a tent from hoop house materials, perhaps that would help the tomatoes along.

These ideas *could* provide enough heat to help the tomatoes along through a
colder winter than we get down here in zone 9. I can't test that
hypothesis since I'm down here, but if one of you Northerners took my
idea and tried it, I'd be very interested to see if it helped any!

I got the 2nd idea when I was looking at the cheyannarach posted in http://squarefoot.forumotion.com/t11541-got-a-plant-inn-and-compost-tumbler-today-yay about her new Plant Inn. At first I thought the Plant Inn was sitting on top of a compost bin...then the first idea came from the conversation about hoop houses.

Any opinions out there???

Down here in deep south Texas I think more people grow tomatoes during the winter than during the summer. Gets too hot for them to set so quickly. Jan/Feb I was getting WONDERFUL tomatoes from a farm to market place where the field was right next door to where they sold them. They even had a U-Pick option.

You know that the sunlight thing is really important, and works well the other way as well.
I was totally amazed last summer how quickly everything grew after the end of June.
WAY faster than down in Oregon, and I think it was because our days are much longer in the summer.

So from June 21 until Sept 21 our days are longer.
Up further north they are able to grow 3 crops of hay in the short summer months because of the long days.

Yup, and down here we don't really get much of a difference in our day length. I think here it's less than 2 hours difference between our longest and shortest day.

Let me elaborate on my thought process:

Temperature, sunlight, nutrient availability and water, those are what my biology classes taught me was necessary for plants to thrive. Full-sun plants are said to need 6-8 hours of sunlight, right? So, if you have an 8 hour day, that could be sufficient even when the angle of the sun isn't great, as long as you control the other factors. The way I understand things (someone please correct me if I'm wrong), the range is the difference between a good angle and a not-so-good angle of sunlight in keeping a plant thriving. It's possible that you folks in the far north won't get enough of an angle for 8 hours to be enough for tomatoes, I don't know. Perhaps you need 9 or 10 in British Columbia in the winter, depending upon where in the province you live. But I think this might at least work in Oregon.

@elliephant wrote:Yup, and down here we don't really get much of a difference in our day length. I think here it's less than 2 hours difference between our longest and shortest day.

Where would I find out the details for my area?

I take it that 'sun' indicates 'light' as opposed to 'dark.'

We get some cloud cover, which burns off later in the day...that time is determined by the season. 3pm in the winter, noon in spring & fall, 9am or earlier in July.

I still had tomatoes ripening and flowers on the plants when I pulled them last month so that I can replant. I don't have enough room in the beds to let them go to see if they would ramp up production again. A friend in Chino Hills still has toms producing now from last year. Hers are just sprawling on the ground.

That is so cool
I wonder if you can extend the sunlight with the use of mirrors?

@AvaDGardner wrote:
Where would I find out the details for my area?

I take it that 'sun' indicates 'light' as opposed to 'dark.'

We get some cloud cover, which burns off later in the day...that time is determined by the season. 3pm in the winter, noon in spring & fall, 9am or earlier in July.

Ava - here is a link to play with - currently it's set to my location - but you can click the "Change Location" link and set it to yours. Note it gives length of day (i.e. number of hours between sunrise and sunset). It doesn't deal with growing degree days, angle of the sun or anything else...just length of day. I'm in an area that is vastly different with my shortest day being around 9 hours 21 minutes and longest being just a few seconds shy of 15 hours.

UTBW, your new avatar is great!

When in Edmonton CAN, around the time of the summer equinox, it stayed light until 11pm. That was an adjustment!

I bet you have some long days!)

Linda, thanks for the info about your tomatoes. I've always had some problem with my plants, so this is the great experiment. If they can stay in...so be it! Please keep us posted how her plant does this year.